Rocketing demand for allotments across the country – some with people on waiting lists for years – has made the ambition to grow your own nothing more than a pipe dream for many. Inspired by this mismatch between supply and demand, Conor Gallagher, a former architect from Belfast, gave up his job last year and launched a website, AllotMe, to match want-to-be gardeners with owners of green spaces that were otherwise lying unloved or unmanaged.

“More and more young people are turning to what was once considered an older person’s pastime,” Gallagher says. “It was clear we needed a new approach to create more plots out of unused space across the country.” Here, four gardeners and their hosts talk about what getting together to share precious growing space has meant to them.

When Nick Walton asked his wife Georgina to describe something she would like for Christmas, she paused for a moment and said, “I’d like somewhere I can have a nice sit down, a glass of gin and to look into the sunshine.”

Other people might have thought of a holiday at this point, but not Nick. He went straight out and rented his wife a plot of land so she could have an allotment. “I have given Georgina a plot of land to work on – with the promise of gin in the future,” he says, with a wink.

In reality, it’s Nick who’s putting the hard work in to make his and Georgina’s long-held dream of a plot of land where they could grow things become a reality. But it’s not just any old allotment they are working on – Nick is planting a mini-orchard. So far he has six apple trees round the edges of the 70m2 plot, each with a different variety, from Braeburn to Bramley to Katy, an apple he chose because it shares a name with his daughter. There is also a pear tree and a few vegetables, including cabbages, cauliflower and potatoes – but it’s the apples that are his main focus.

We hope that once the apple trees are up and running, some of the fruit will go down to the local food bankNick Walton

“We’ve always had at least one apple tree in every garden of every house that we’ve lived in,” says Nick. “So I suppose it was a little dream. You get towards retirement and start thinking well, what can I do? What’s going to keep me away from the golf course? I can’t stand golf. And an orchard sounded like a rather nice idea.”

Clearing the plot was not an easy task – a battle against giant hogweed left Nick with a bright red face and neck after the weed released toxic chemicals as he chopped it back. Then there is the herd of deer that keeps turning up on the plot and targeting the Katy tree. But none of this is enough to put Nick off. He has Asperger’s and says the allotment, which he rents for £25 a month, is beneficial to him. “Having something to do really helps. You might say I get a little bit obsessional about it,” he says. “But it gives me time away from lots of people and allows me to focus hard for an afternoon on turning the earth over. And what we hope is that once the apple trees are up and running, they will have more fruit than we know what to do with and then some of them will go down to the local food bank.”

Having Nick on the land has also helped the host of the plot, Stephen Buck. A professional musician, Stephen works from the farmhouse overlooking the land and is hoping if he can rent enough plots it can provide some additional income. He and his wife bought the farm more than 20 years ago, but in 2010 she died, leaving him with two young children. “We had horses on the land originally, but then my wife died, and she was the rider, and my daughter grew out of it. I’ve tried a few things, like having sheep, pigs, cows, but they all have their problems. And then I saw AllotMe online and thought it was a good idea.”

The land comes with a pond, served by a spring, so the gardeners can use this for their sprouting produce. It will be a while until Nick has any apples to pick, but when he does, one person who won’t be joining him is his daughter – she has an allergy to apples. “But she can eat them once they’re cooked, so I’m going to have to make an awful lot of crumble!”

‘I really wanted to make my own pasta sauce’

There is sprouting broccoli neatly sewn in rows of four. Then there are courgettes, with paper-thin golden yellow flowers starting to emerge under the broad green leaves and beans, sweetcorn, chamomile and parsley all contained within salvaged wooden planks used to make raised beds. There are dozens of potato plants and foot-high sweetcorn, their shiny green leaves reflecting the sun. And then there are tomatoes, the treasured fruit that gardener Abbey Fenton really wants to nurture.

“I want to grow loads of tomatoes, because I really, really want to make my own pasta sauce. Ever since I grew my first tomato, that’s been my goal, to have enough of an excess that I wouldn’t just keep scoffing the odd one as I went along. I’d cook with them and, when I have enough, freeze the sauce.”

The plot that Abbey is renting for £10 a month and which, a year in, she has already packed out with fruit and vegetables, belongs to Julia Jepps.

It’s tucked away to the side of Julia’s 19th-century cottage near the village of Billingshurst in West Sussex. It’s the perfect rental space, with a greenhouse (that needed stripping of ivy a year ago), a tap, a shed full of tools and its own private entrance, separate to the house’s back garden. Julia admits she’s not green-fingered and has always lacked the time or inclination to dedicate hours to gardening.

“I was conscious that it was a fertile plot, that there are people who really love gardening and that there is an allotment waiting list,” she says of her decision to rent it out. “It felt very selfish not to let somebody else have the opportunity to use it and enjoy it.”

Abbey, who lives in a one-bedroom flat just up the road, and works even closer to Julia’s house, comes four or five times a week to “nip in and water stuff”. She had been on a waiting list for an allotment for the past two years and couldn’t believe her luck when she found Julia’s plot instead. Inspired by her dad, also a keen gardener, and with his help, she cleared the weeds and dug the beds before planting. Now the work is a little less labour-intensive and she can enjoy what she has created.

“On my days off I’ll spend most of the day here. I just bring some lunch and enjoy it if the weather’s nice.” But it’s not just Abbey who is making the most of the newly revived outside space. When she goes home Julia will sometimes come and sit at the little table by the side of the raised beds underneath the ancient apple tree, its branches heavy with green fruit. “It’s not a place I’ve ever felt very attracted to being in because I felt guilty about not using it properly,” she says. “But now sitting here, I feel uplifted to see that it looks so beautiful.”

‘I planted some seeds and they grew and grew’ 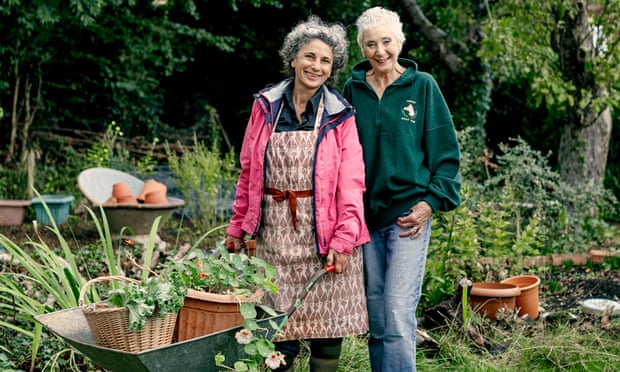 If you had told Rosa Mechoni a few years ago that she would regularly be sticking her hands into soil, she would not have believed you. Her day job as an operating department practitioner, part of a hospital surgery team, means she spends most of her life being absolutely squeaky clean.

“You couldn’t possibly think of two more different environments to be in than an allotment and an operating theatre,” she says. “I spent my youth in sterile theatres and environments as a scrub nurse – and I was not green- fingered whatsoever.”

Then, five years ago, she came to England from Argentina, arriving with her husband, a scientist. But it wasn’t a gradual slide into settling down that got her digging in the dirt, it was a scare over her own health. “I hit my 40s and I developed some gut issues,” she says. Her GP suggested a variety of procedures at the hospital, but instead she decided to radically change her diet and for her that meant growing her own greens.

“I planted some seeds in the spring in the garden,” she says, “and they grew and grew. So by the next year I thought, ‘I need a bigger space.’”

I love sharing. If you don’t share what you grow, then there’s not much point reallyRosa Mechoni

She eventually got an allotment and had a successful few years there, but “the situation with allotments is not always a rosy story” she explains, citing break-ins and “some nasty situations”. So she decided to look for an alternative.

Then she met Helen Webster who, for 40 years, alongside her husband, has owned a 1930s semi-detached house with a 120ft garden. The two women may not have anything in common on paper, but scratch the surface and there are important things that bind them. Both have an intense relationship with the NHS, one through working there and the other, Helen, as a result of ongoing treatment for cancer. They are both dealing with the aftermath of tragedy – Helen through losing a son and Rosa her husband. But perhaps most importantly, they both strongly believe that the produce of the earth is there to be shared.

“This arrangement brings up this wonderful concept of putting trust back into people because you have to work together, you have to communicate and work towards a common goal,” says Rosa. “It’s not only about me growing whatever I want, I love sharing. If you don’t share what you grow, then there’s not much point really.”

This desire to share is what drives many of the arrangements on AllotMe. Plot owners only have to commit to three months (though this is likely to increase soon based on feedback from users), so in theory there is nothing to stop them taking their land back. But Helen, like many others, is motivated by kindness and generosity.

She has long shared her garden, renting at various times to three different people before Rosa – and she does it for free. “These are really family homes and family gardens,” she says. “And it’s a waste of space otherwise, when you know there are people who could use it.”

The arrangement between the two women is a brand new one, but already Rosa has planted leeks and chard. Helen used to garden herself before ill health and a busy role as a grandmother got in her way. But now Rosa has not only inspired her to cook again with some of the produce they grow, but has given her something else, too. “There is a friendship and knowledge between us,” Helen says. “She knows things, I know things. You could say we support each other. I think that’s really nice.”

For more information about renting a plot, go to allotme.co.uk

Many longtime gardeners will tell you that the garden is their happy place. New research suggests that many people may indeed reap mental health … END_OF_DOCUMENT_TOKEN_TO_BE_REPLACED

Many goldenrod varieites are tall, but Golden Fleece is a small-statured variety. It produces tiny, bright yellow flowers in clusters on arching … END_OF_DOCUMENT_TOKEN_TO_BE_REPLACED

I asked in a Dutch photography community how they feel about black and white photography for landscapes. It seems it's not generally accepted, and … END_OF_DOCUMENT_TOKEN_TO_BE_REPLACED