The birds are in full song, the yellow banksia rose is starting to pop and the wisteria is budding up into fat fluffy tails when I visited Camden Park a few weeks ago. By the time the house and garden open for the first time in three years this weekend, the wisteria will be a lacy lilac flounce along the base of the stone terrace at the back of the house, the butterfly hippeastrum will be blooming in the Shrubbery and ixias will star the slopes of the Blarney.

Camden Park was the internationally renowned garden of colonial plant breeder and nurseryman, William Macarthur, son of John and Elizabeth. The property has remained in the family; the current owners are Edwina and John Macarthur-Stanham. Though, says John “you don’t really own a property like this; you are its custodians for a time.” That philosophy has protected the property’s many treasures, indoors and out.

Some of the most historically significant plants in Australia grow right here. That small-leafed bauhinia lounging under a jacaranda was grown from seed collected by William Macarthur’s great friend Ludwig Leichhardt. Just nearby is the first camellia grown in Australia, which fittingly features flowers that look like a waratah. Over there is a clump of Chilean wine palm, a super-slow-growing palm almost extinct in Chile, but which has been propagated here at Camden Park and planted out in the National Arboretum in Canberra. And that tree may well be the oldest wild macadamia in Australia, a relic from a population wiped out by the expansion of Brisbane, and genetically different to cultivated macadamias.

Labour was cheap when these trees were planted, but a century and a half later that’s no longer the case, so the volunteers who work in the Camden Park garden are vital to its upkeep. There’s a range of garden expertise among the team of around 20 volunteers and head gardener Trish Restante works hard to identify what everyone likes and doesn’t like to do – weed, rake, prune, shift mulch, fix the irrigation – and offers tasks and video tutorials accordingly.

Over more than a decade the volunteers have made an immense contribution to the garden and its history. The huge boilers that William Macarthur had installed in the 1850s to heat his orchid houses were uncovered under decades of garden refuse; more recently the history of unearthed wine vats linked to the beginnings of Australia’s wine industry has been researched, and neglected garden beds have been brought back to vivid life. 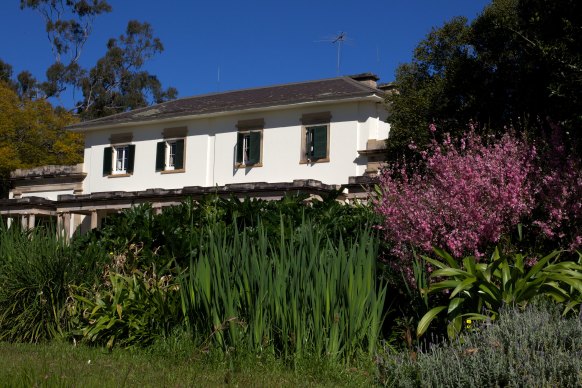 The benefits flow both ways, with the volunteers talking about the joy of the birdsong and peace of the garden, the satisfaction of a job completed, the fun of teamwork and the sense of accomplishment in maintaining part of our colonial heritage. Plants propagated from the gardens by the volunteers will be for sale over the weekend, alongside some of their Camden park-related craft works. There will be tours of the house available, as well as tours of the gardens by horticultural experts, with plenty of stories about the extraordinary treasures growing here. Gates open at 10am.

Don Nice, publicity officer, said the very hot weather followed by extremely heavy rain and strong winds had not helped the gardeners. On show were … END_OF_DOCUMENT_TOKEN_TO_BE_REPLACED

The plan, which was first proposed in 2015 to mark the Queen’s 90th birthday, would see an arch knocked through the wall of the palace on Grosvenor … END_OF_DOCUMENT_TOKEN_TO_BE_REPLACED

CARLSBAD, CA — Searching for a home with drought tolerant landscaping? Check out this property in Carlsbad.Built in 1978, this single-level home … END_OF_DOCUMENT_TOKEN_TO_BE_REPLACED

PADUCAH — Beautiful Paducah, the beautification organization that organized this year's Barbecue on the River, says the votes are in, and part of the … END_OF_DOCUMENT_TOKEN_TO_BE_REPLACED