PROVIDENCE – On Jan. 17, 1973, after more than a decade of planning, the vision of an entertainment arena in downtown became a reality with the opening of the Providence Civic Center, replacing the old Rhode Island Auditorium on North Main Street. Since then, many musicians, comedians, wrestlers, circus performers and championship teams have all entertained Rhode Islanders both young and old inside the 13,000-seat arena.

But over the years, the arena, now known as the Amica Mutual Pavilion, became more than just a venue for local fans to cheer within. State convention officials say “The AMP” was, and still is, the centerpiece that resulted in downtown being revitalized and expanded commerce in the city.

Now, the brown-colored arena with a hint of green will celebrate a golden anniversary this year. The R.I. Convention Center Authority has plans in place to commemorate the Amica Mutual Pavilion’s 50th anniversary with multiple initiatives, including community service projects, bringing back past performers to the arena and offering contests where residents can win tickets to upcoming events, among others.

Lawrence J. Lepore, the RICCA’s general manager, told Providence Business News Friday that when the arena opened in the winter of 1973, only one downtown hotel was in operation. At the time, the historic Providence Biltmore Hotel – now the Graduate Providence – was “all boarded up and closed,” Lepore said.

Lepore said that over the years, the Amica Mutual Pavilion was “the real anchor” to increase economic activity in the city and help give downtown a significant boost. He referenced multiple nearby downtown hotels, such as the Omni Providence Hotel and the Residence Inn Providence Downtown across the street, being built since then and local restaurants thriving.

“People talk about how the city reinvented itself, and I think it has. But this building is what really did it,” Lepore said. “The initiative really started with [then mayor] Joe Doorley and this building, bringing people back downtown.” 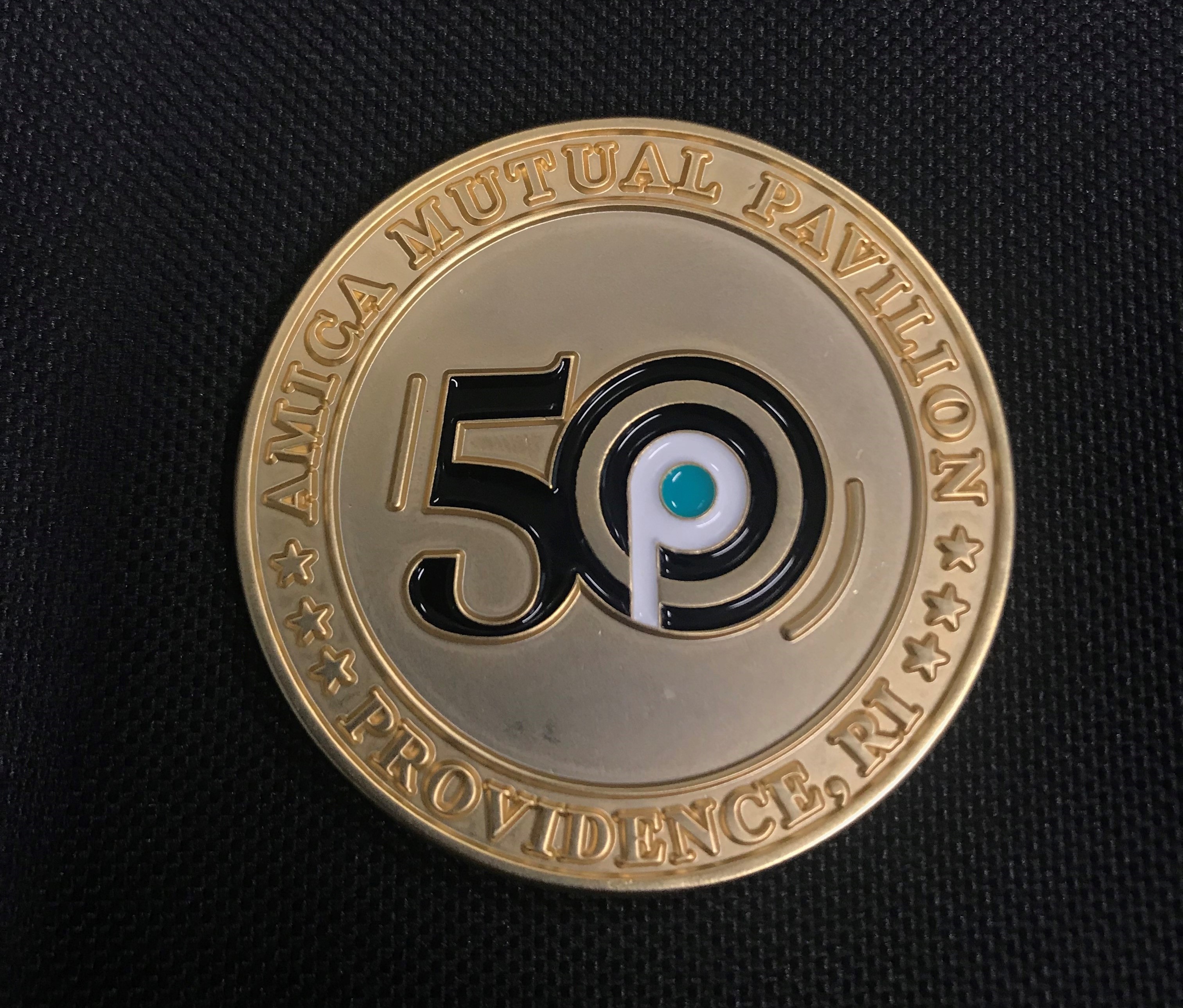 Lepore also said the arena became a focal point in college basketball’s Big East Conference being formed in 1979. The late Dave Gavitt, former Providence College coach who helped create the conference, thought college basketball’s future as playing games in large downtown arenas, and used Providence’s then-new arena – which has served as the Friars’ home since 1973 – as an example, Lepore said.

“[Gavitt felt] that college basketball could not survive on campuses in 1,900-seat arenas,” Lepore said. “That’s why there has been success in the Big East.”

“They can be as simple as a clothing drive. We’ve also done toy drives,” Cohen said. “We’ve also been talking about doing a drive for local animal shelters.”

Cohen also said convention officials “would welcome” any support from the community, including from local businesses, to aide in the AMP Gives 50 initiative. She said the RICCA hopes to also work with Amica Mutual Insurance Co. – which owns the naming rights to the arena and R.I. Convention Center – as a partner on community service initiatives through the year.

Regarding special performances, Cohen said Boston-based musical group New Edition, which had performed at The AMP in the past, will make its return to the arena for an April 21 show. World Wrestling Entertainment, which has brought wrestling events to the arena since November 1973, will have its “Monday Night Raw” show on March 13. Cohen said the WWE and New Edition shows have “special celebrations” at those events for fans to mark the arena’s anniversary.

Cohen also confirmed Friday that the convention center authority will have some contests where people can win tickets for upcoming events at The AMP, as well as win merchandise. Among the new merchandise being offered is a commemorative Amica Mutual Pavilion 50th anniversary coin where the zero in the “50” is in the shape of the former Providence Civic Center logo.

RICCA Senior Marketing Manager Veronica Van Jura also said that each month, a new commemorative music playlist featuring acts that performed at The AMP over the years will be created and can be downloaded into a Spotify account. There will also be a new large install in the arena’s lobby showing old show advertising posters, tickets and T-shirts of acts that performed at The AMP, outlining the arena’s history, Van Jura said.

Daniel P. McConaghy, the authority’s executive director, also said there will be several opportunities over the coming year for the authority to both engage and recognize longtime business partners that have supported the arena from the very beginning. He also hopes area businesses can greatly benefit economically with The AMP turning 50 this year, as well.

“We have a major influence on local businesses, and it’s much more significant than what people appreciate,” McConaghy said. “It rolls deep.”

James Bessette is the PBN special projects editor, and also covers the nonprofit and education sectors. You may reach him at Bessette@PBN.com. You may also follow him on Twitter at @James_Bessette.

Want to share this story? Click Here to purchase a link that allows anyone to read it on any device whether or not they are a subscriber.

Duke made 55.7% of its shots from the field and recorded 24 assists, which were season highs both allowed by the Jackets and also attained by Duke. … END_OF_DOCUMENT_TOKEN_TO_BE_REPLACED

VISUAL artist Kate Wise has set herself a new year’s resolution to be in her Ballarat gallery every weekday and to paint on site. The Haddon creative … END_OF_DOCUMENT_TOKEN_TO_BE_REPLACED