A seemingly innocuous crossword clue in an ABC magazine has been blasted as ‘hate speech’ by a breast surgeon, sparking a furious backlash.

Dr Rhea Liang, who is a clinical associate professor at Queensland’s Bond University, tweeted her dismay at finding the crossword in a February edition of Gardening Australia asking for a five-letter word that meant ‘adult human female’.

She argues the obvious answer ‘woman’ discriminates against those born with male sex organs who identify as female.

‘Disappointed to see un-inclusive language in your publication, ABC Australia. This phrase is a siren call for hatred,’ she wrote.

The tweet triggered a fierce response from commenters denying there is anything offensive about it. 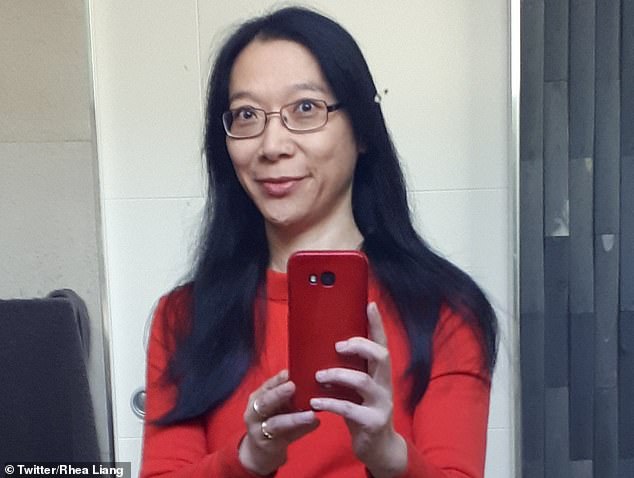 Dr Liang said that there a proportion of adults, born genetically male, who are also women

‘If you won’t acknowledge the *fact* that a woman is an adult human female, why should anyone let you come anywhere near them to practice medicine on them, because if you’ll ignore that biological fact what else will you ignore?’

Dr Liang, who lists her academic specialities as breast cancer management as well as diversity and inclusion in medicine, did not back down on her claims arguing the definition excludes trans people.

‘A woman is most commonly an adult female human, (the word order is important) but there are a proportion who are also adults, born genetically male, who are women,’ Dr Liang insisted.

‘It’s quite a complex area, not limited to genes and identity alone. Humans are complex, that’s the beauty of us.’

This did not impress her critics who called the claims ‘ridiculous’. 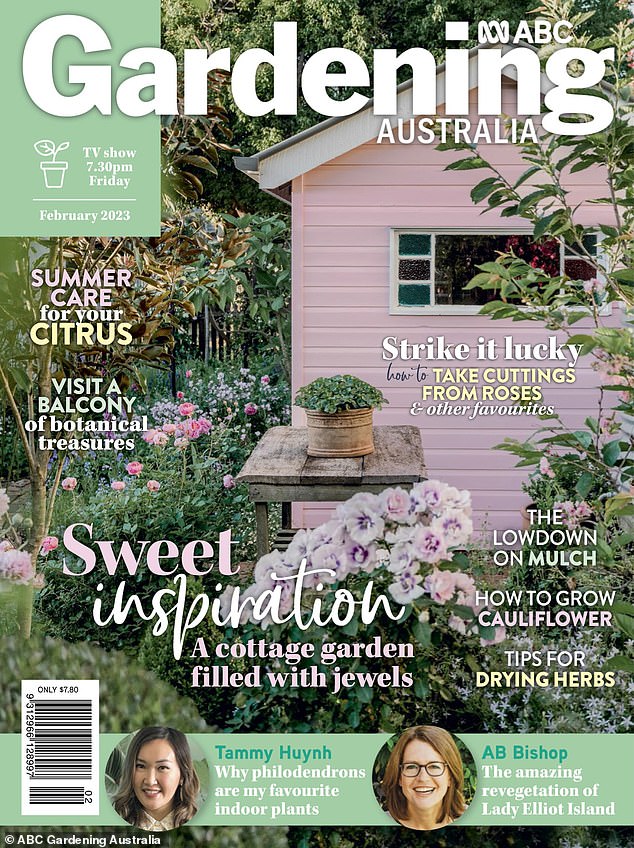 ‘I thought this was parody and actually laughed out loud,’ one person replied.

‘But no. You really just called a crossword puzzle a transphobic siren call for hatred.

‘For the 10,000th time: Woman is not a dirty word. The definition of woman IS ‘adult human female’. Grow up and get some self-respect.’

‘I find it interesting that many of these replies have proven my point- this phrasing *is* a siren call for hatred,’ she wrote.

‘I imagine many of these people, when told that ‘fat’ is offensive to some, would similarly defend their use of it by saying ‘yeah, but you *are* fat’.’

She went on to explain that the correct dictionary definition should read ‘adult female human’, putting biology last.

The word woman has become such a contentious term that Dictionary.com, the leading online English-language resource, called it the word of 2022.

The definition has become so tricky that Australia’s top health boss was left stumbling over his words when asked to define what a woman is by Liberal Senator Alex Antic during an estimates hearing in April.

Dr Brendan Murphy awkwardly said he’d have to take the question on notice.

Dr Liang wrote, when asked for an alternative definition of woman: ‘Anything you like – lady, damsel, gender of aunt, song by Harry Styles, whatever.’

‘You only need to Google the phrase ‘adult human female’ to get pages of anti-trans hate,’ she said.

‘It’s such a known hate phrase it’s caused a ban from standing for the UK Parliament.’ 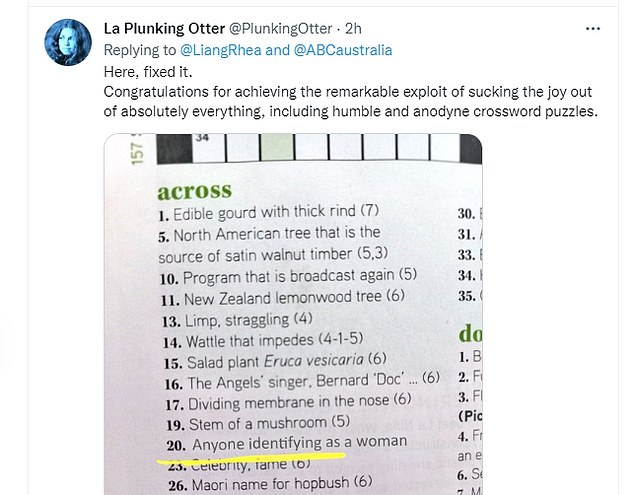 In support of her argument she retweeted an article outlining how Natalie Wood, a prospective candidate for the left-leaning British part the Liberal Democrats was banned from the party because she wore a t-shirt reading: ‘Adult human female’.

Dr Liang also had her supporters singing her praises.

‘Great stuff, thanks for sharing & educating! xoxo,’ one person wrote.

‘Friendly reminder that if I said ‘adult cat female’ or ‘adult fox male’ it would sound and look peculiar,’ another person tweeted.

‘Dog whistles are designed to fit in without noticing and be able to be brushed away with plausible deniability. It disturbs me that people seem so eager to fall for it.’

A sarcastic solution was offered by one Twitter user, who posted the list of clues but replaced 20 across ‘Adult human female’ with ‘Anyone identifying as a woman’.

‘Here, fixed it,’ they tweeted.

‘Congratulations for achieving the remarkable exploit of sucking the joy out of absolutely everything, including humble and anodyne crossword puzzles.’

Daily Mail Australia has been contacted Dr Liang and the ABC for further comment.

MAHONING COUNTYMaster Gardener volunteer training. Beginning Feb. 7, this 12-week course covers everything from fruit to perennials and soils to … END_OF_DOCUMENT_TOKEN_TO_BE_REPLACED

BUY TICKETS Prefer a hi-fi sort of Sunday session to basic beers at the pub? Well, you're in luck because Poodle Bar & Bistro is here to elevate … END_OF_DOCUMENT_TOKEN_TO_BE_REPLACED

Y'all, who's ready to say sayonara to the ice and freezing rains? *Raises hand* I certainly am! For now, I'm back with your new edition of the Round … END_OF_DOCUMENT_TOKEN_TO_BE_REPLACED

But how do you know whether you have Japanese Knotweed in your garden and how do you go about getting rid of it? Gardening expert Chris Bonnett from … END_OF_DOCUMENT_TOKEN_TO_BE_REPLACED