The Delhi pavilion at the 41st International Trade Fair will showcase Delhi as the “city that cares.” Visitors will get a glimpse of education, health, infrastructure, electricity, water, transport, tourism, and policies to reduce inflation. 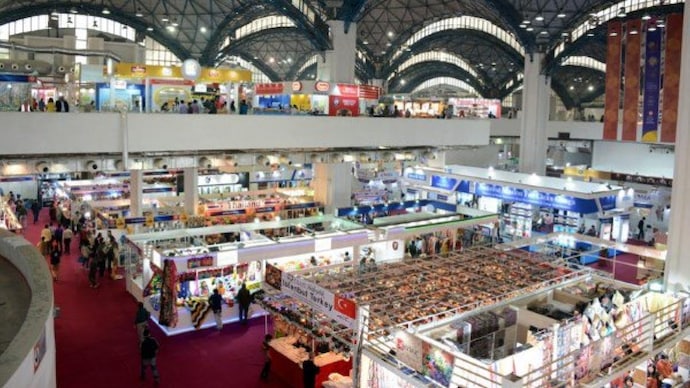 The 41st International Trade Fair will be held at Pragati Maidan. (Credits: Twitter)

By Pankaj Jain: The Pavilion of the Delhi Government at the 41st International Trade Fair being held at Pragati Maidan in Delhi this year will showcase Delhi as ‘the city that cares’. Those coming to the Delhi Pavilion will see a glimpse of education, health, infrastructure, electricity, water, transport, tourism, and policies to reduce inflation. On Thursday, Deputy Chief Minister Manish Sisodia reviewed preparations for the International Trade Fair after meeting with officials.

“The design of the Delhi Pavilion will be based on the design of e-buses of the Kejriwal government. Along with this, a glimpse of the rich cultural heritage and history of Delhi shall also be displayed in the design of the stalls present inside the pavilion,” said an official.

“In the pavilion, what will also be shown is how the roads, flyovers, bridges and many other infrastructural developments in Delhi have brought recognition to our city globally and people from abroad, as well as from different states of India have lauded this transformation,” added the official

According to the Delhi government, the trade fair will also show how Delhi cares for the people who come to the city by providing them with world-class educational and healthcare facilities. Delhi’s education model has undergone remarkable changes in the last few years and these will also be a part of Delhi’s display at the International Trade Fair.

The “Mohalla Clinics” health model shall also be put up as a part of the Delhi Pavilion’s exhibition at the trade fair. Delhi government’s e-film policy and the redevelopment of Delhi’s markets will be added to the mix.

Along with these, the city’s culture, heritage and monuments will be exhibited at the fair. Various selfie points shall also be introduced for visitors to have an immersive, memorable experience of the Delhi Pavilion.

Summer is here, and this week Gardening Australia celebrates the bounty of summer gardens. The episode is also recognising International Day of People … END_OF_DOCUMENT_TOKEN_TO_BE_REPLACED

The Katara Traditional Dhow Festival, organised by Katara - the Cultural Village and based on the region’s maritime heritage, continues to dazzle as … END_OF_DOCUMENT_TOKEN_TO_BE_REPLACED

DAYTON, MN - (NewMediaWire) - November 29, 2022 - A property's landscape is an extension of the indoor living space, and the landscaping experts at … END_OF_DOCUMENT_TOKEN_TO_BE_REPLACED