Take a walk around your neighborhood and see how many front lawns are now dry and patchy, turned into yellow straw or dirt. This is no accident, nor are residents too lazy to take care of their yards. Most of them are conserving water. Living in extreme drought has prompted many Alamedans to make major changes in water usage, including converting lawns to drought-tolerant gardens and using drip irrigation systems. Lawns simply have to go in order to plant new landscaping. The initial transition may not always be lovely to look at, but the result can be lush and beautiful—and highly successful at conserving water. 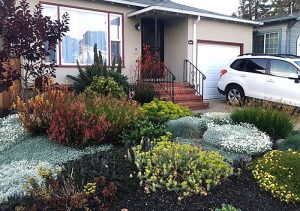 Lawn before and after drought-tolerant landscaping. Photos courtesy EBMUD.

Here in the Bay Area, we have reduced our water consumption far more than the average Californian, according to state leaders and Bay Area water agencies gathered this week at the Quarry Lakes Demonstration Garden in Fremont. During the first six months of 2022, we reduced water use to an average of 60 gallons per person per day compared to the state average of 82 gallons, according to East Bay Municipal Utility District (EBMUD). Multiply that by EBMUD’s 1.4 million users and you get a picture of how much we saved by changing our water habits and habitats—at least 72 million gallons a day. “EBMUD customers are phenomenal at conserving water,” EBMUD general manager Clifford Chan said.

Transitioning from lawns to drought-tolerant landscaping not only saves water, it also saves money. Less water usage means lower water bills each month. And on top of that, EBMUD issues rebates for lawn conversions of up to $2.50 per square foot, with a maximum of $2,000 for single-family and small multi-family homes, or $15,000 for commercial, municipal, and large multi-family properties. There also are rebates for switching to efficient irrigation systems, using flow meters, and using gray water from indoor sources for outdoor landscaping. Visit the EBMUD website for information about the rebate program and instructions on how to apply.

A lot of Alamedans have already received those rebates. During the past eight years, EBMUD has processed more than 250 lawn conversion rebates, representing more than 380,000 square feet of conversions from lawn to drought-tolerant landscaping within the City of Alameda, according to Nelsy Rodriguez, the water agency’s public information representative. “We’ve also processed approximately 180 rebates for conversion from spray to drip irrigation,” she noted. 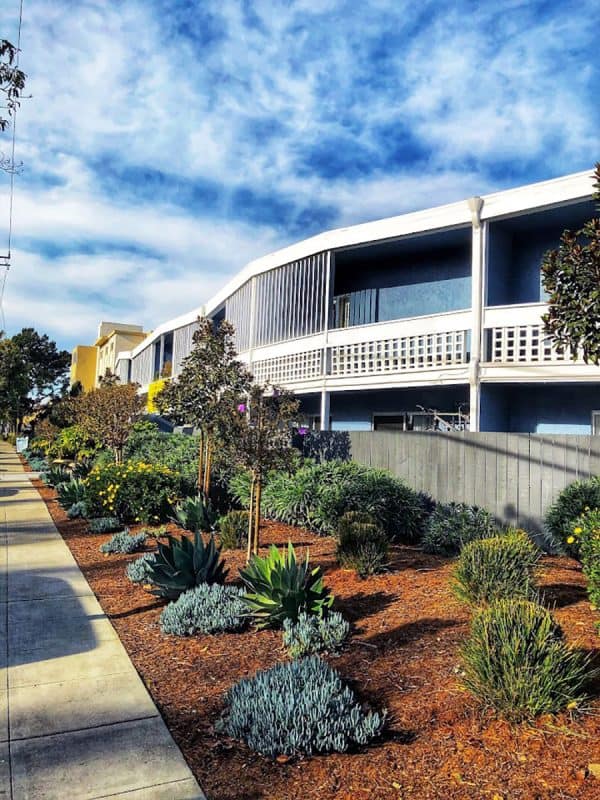 It’s not just individual homeowners or renters who are making the switch. Many apartment complexes around town already have converted their lawns to beautiful drought-tolerant gardens. Most of the apartments that line Otis Drive across from the South Shore Center now have drought-tolerant landscaping on their medians between the sidewalk and the street. And the City of Alameda is conserving water as well, not just with City Hall’s new lawn conversion but also with city-owned properties such as Independence Plaza, an apartment complex for people aged 62 and older, which has drought-tolerant, bay-friendly habitat throughout the grounds. 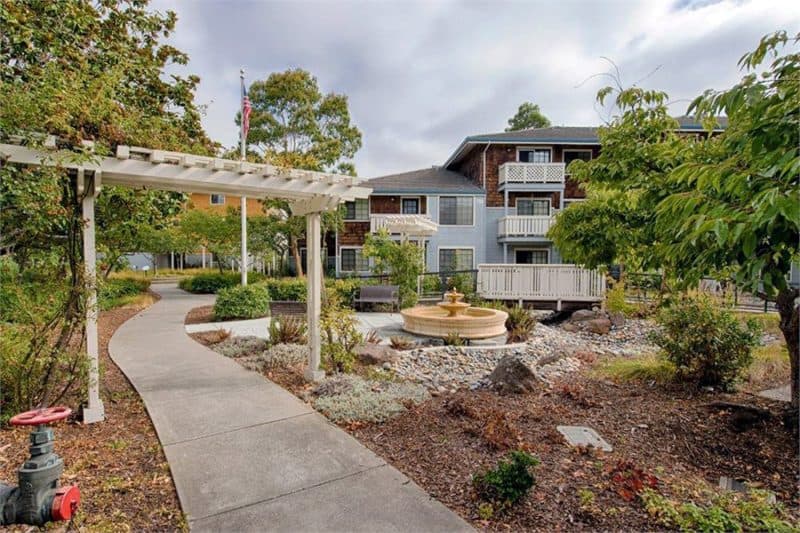 Getting started with a drought-tolerant garden is fairly simple

Ready to convert your yard to a drought-tolerant garden? The first step is to get rid of your lawn in the area you want to re-landscape. The easiest and cheapest way to get started is sheet mulching (see video below).

Start by gathering cardboard boxes, often available from your neighborhood grocery store. Open the boxes out flat, cover your entire lawn with the cardboard, and then cover that with wood chip mulch, or bark. Many tree service companies will deliver free wood chips, and EBMUD will give you coupons for free mulch and compost at nearby nurseries.

Then just wait three to six months to let the cardboard and mulch break down into the soil. The best time to do this is summer or fall, but you can start whenever it is most convenient for you. The key ingredient is patience.

For those of us who aren’t gardening experts, there’s a wealth of information online. The Harbor Bay Isle Homeowners Association (Bay Farm Island) offers free downloadable drought-tolerant landscape plans and lawn conversion guidelines with detailed plans for a variety of different gardens. Take a look at the fully customizable California Native Plant Society garden planner to see plants that are native to Alameda and suit your goals as well as your preferred garden aesthetic. 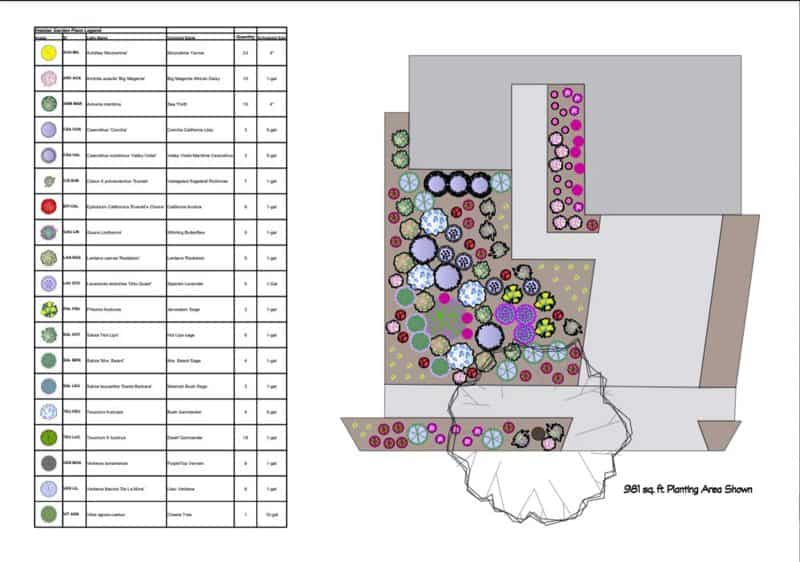 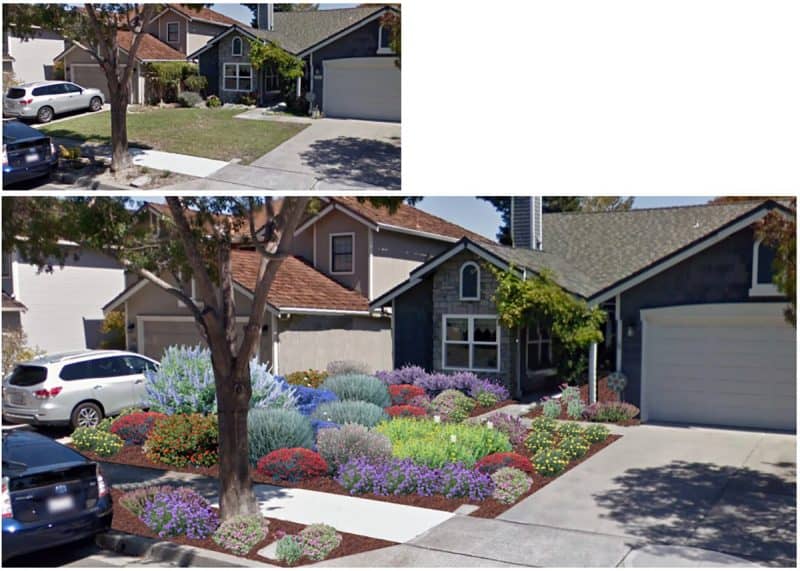 A rendering of a the lawn transformation using the above plans. Photo HarborBay.org.

And by all means, visit our local nurseries and ask questions. Encinal Nursery (2057 Encinal Ave., open seven days a week) is family-owned and operated and has been here in Alameda since 1946. Their huge variety of beautiful plants is second to none here on the island, and the staff is very helpful. Their greenhouse is filled with cacti and succulents. 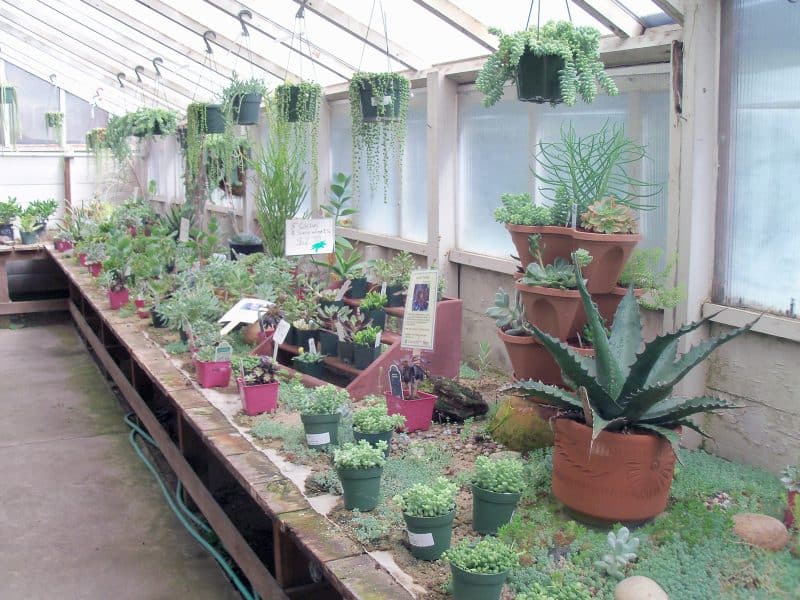 Encinal Nursery has a wide selection of cacti and succulents. Photo @encinalnursery.

Ploughshares Nursery (2107 Main St., open Wednesday through Sunday), specializes in California native, drought-tolerant, and edible plants. Part of Alameda Point Collaborative (APC), the full-scale nursery has its own demonstration garden and offers hands-on workshops on sustainable landscaping and garden design. Sales from the nursery generate revenue for APC’s supportive housing for the formerly homeless, and the business provides job training to APC residents as well. 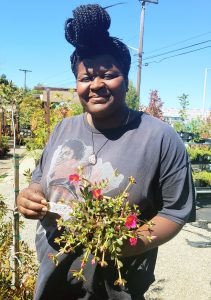 “Many people who come here are looking for heat-lovers and native plants that eventually will take care of themselves as far as water-wise gardening,” said Ploughshares manager Jordan Taylor. “Also, a lot of native plants have natural defenses against pests, so you can avoid using pesticides.”  Walking through the nursery, she noted that although succulents and cacti are beautiful and very popular in drought-tolerant gardens, they’re certainly not the only options. “Native milkweed is amazing,” Jordan said. “Monarch butterflies love milkweed. Echinacea is very popular. And people love passionflower vines. They’re not necessarily native, but they are once established, they are definitely drought-tolerant and very much love the heat. Salvia and most lavender also will be great for your drought-tolerant garden.”  Taylor and her staff are available during business hours and are happy to share advice on garden planning.

Liz Barrett is the Copy Editor of the Alameda Post and writes about the community. Contact her via [email protected]. Her writing is collected at AlamedaPost.com/Liz-Barrett.

FANS expecting to see Jason Donovan at the Cliffs Pavilion have been disappointed the last two nights. Jason, alongside Alexandra Burke, start in … END_OF_DOCUMENT_TOKEN_TO_BE_REPLACED

You might know me as the plant lady who for years has attended the Village meetings requesting better services, with scant results.I have been told by … END_OF_DOCUMENT_TOKEN_TO_BE_REPLACED

There is a real upside to two new sweet potatoes making their debut in 2023. I mean that tongue and cheek as that is actually part of their name, but … END_OF_DOCUMENT_TOKEN_TO_BE_REPLACED

LEWISTON, N.Y. — The success of the recently completed The Apartments at Legacy complex is prompting LMK Realty Associates LLC to move forward with a … END_OF_DOCUMENT_TOKEN_TO_BE_REPLACED