“We knew that men had died down there in the shimmering heat of that white floor…and yet we saw it covered with a mantle of such strange beauty that we felt it was the noblest thing we had ever imagined. Only a poet could express the emotion of beauty, stronger than fear and death, that held us silent moment after moment.” Edna Brush Perkins (“The White Heart of Mojave” 1922)

America’s largest National Park is a severe and majestic wilderness. The desert park’s grim name serves as a precautionary tale to all who visit there, and not without reason. Once measured at 134° F, Death Valley National Park holds the record for the hottest place on Earth. Despite its heat and aridity, the park is home to over 1,000 species of plants and over 400 animal species that are adapted to its extremes. Covering over three million acres, the park has many surprises that contradict its sinister name. Its historic past and mineral wealth played a dramatic part in the story of the American west. Today, it is a place for recreation and inspiration where visitors can explore its vast, silent landscapes and natural wonders that were made accessible by the hard work of many who came before us.

Gold was discovered in California in 1848 which led to a period of mass migration and mining. Over a century and a half later, Death Valley National Park is now home to over 10,000 mine features, more than 2,000 of which are considered “potentially hazardous openings.” The last of Death Valley’s mines ceased operations in 2005 after the Mining in the Parks Act of 1976 ended the opportunity to file for new claims. At its peak, towns such as Rhyolite in the Death Valley area were producing up to 300 tons of gold ore in a single day. Tens of thousands of tons of gold and silver ore were removed from the Death Valley area in the early 1900s. The booms eventually went bust leading mines to close down and thereby displacing thousands of inhabitants. Scarce ruins of these “ghost towns” remain as they were slowly subsumed by the surrounding desert.

For thousands of years, Death Valley was home to the Timbisha Shoshone Indians before the gold rush brought the ’49ers out west. The Timbisha knew how to survive in the desert by camping near water sources and harvesting seasonal plants. Mesquite trees in the region provided seed pods that the tribe ground down and made into cakes. They made hunting tools out of desert materials and tracked jackrabbits, bighorn sheep and other animals. The incursion of European-Americans into the area brought change and hardship to the native tribe. They were eventually pushed off the land to a small village when a National Monument was established in 1933. It wasn’t until the year 2000 that a 7,800-acre land trust was given to the Timbisha. When asked why the Timbisha never left, Pauline Esteve, a Timbisha elder passionately wrote, “We are part of our homeland and it is part of us. We are people of the land. We don’t break away from what is part of us.”

The National Park that visitors experience today began its development in the 1930s when the Civilian Conservation Corps put young men to work grading hundreds of miles of roads and installing water and telephone lines. They made trails to scenic points and constructed buildings for the National Park Service. Campgrounds and restrooms were also built for visitors coming to stay in the park. In 1994, Congress abolished Death Valley’s designation as a National Monument and enlarged the protected lands under its newly established National Park status.

The lobbying efforts of the Pacific Coast Borax Company played a large role in Death Valley becoming a National Monument. The nationally recognized designation put the area on the radar of average Americans who could stay at the “crown jewel of Death Valley,” the company’s historic Furnace Creek Inn built in 1927. Death Valley’s mineral abundance was not limited to precious metals, but also included borax (sodium borate), a white mineral powder mainly used for cleaning and laundry products. Borax has a wide range of uses including as a melting agent, fire retardant, etc. making it valuable to many industries. At its peak, the Harmony Borax Works near Furnace Creek Ranch produced three tons of Borax daily. Double wagons led by large mule teams hauled the Borax out of Death Valley creating the iconic image of the “20 mule team” that can be seen on Borax products to this day. However, like other short-lived mining efforts in Death Valley, mining at Harmony Borax only lasted for five years due to the serious operational and logistical difficulties. 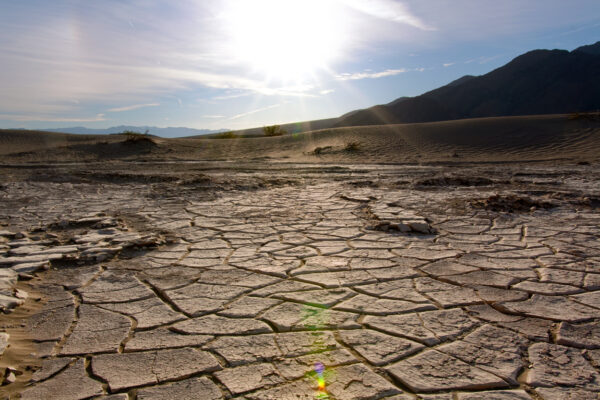 From California to Tatooine

Death Valley National Park was chosen to film scenes of Luke Skywalker’s home planet, “Tatooine,” in 1977’s “Star Wars: Episode IV – A New Hope.” The park’s otherworldly landscapes, tall rocky corridors, and spectacular vistas are truly cinematic in scope. Death Valley got its name for the inhospitable climate which caused the mid-19th century “lost ‘49ers” to suffer and/or perish from thirst and starvation on their migration to find gold out west. Ironically, little did they know that gold would later be found in abundance in this deadly place. Without the park’s modern-day amenities, the average visitor would likely feel as though they had traveled to a strange and dangerous planet as well.

The basin and range geology of Death Valley features exposed rocks that are thought to be over a billion years old. The Earth’s crust has pulled apart along faults forming the alternating valleys and mountain ranges that were home to ancient seas millions of years ago. Sand dunes, craters, salt flats and dark skies all contribute to the untouched and exotic feeling of the aesthetically magnificent landscapes in the park.

The sands of time, trapped by mountains, have accumulated in several areas of the park and formed dunes. Mesquite Sand Dunes are the most popular dunes in Death Valley because of their layered hills and close proximity to the main highway. At the base of the dunes are the cracked clay floors of an ancient lake bed. Twisted mesquite trees grow out of the sand and tracks hint at the various creatures that leave their prints when temperatures decline after nightfall.

Near the park’s main campgrounds and amenities, Badwater Road leads visitors along a range of mountains towards Golden Canyon, “Artist’s Palette Scenic Loop,” and Badwater Basin. Hiking in Golden Canyon and climbing up towards Zabriskie Point makes one feel as though they are on Tatooine. The drive to “Artist’s Palette” is a beautiful one-way road that takes visitors past the rainbow colors of hills created by volcanic deposits of chlorite and iron oxides. Further down Badwater Road, visitors reach the surreal salt flats of Badwater Basin where Sodium Chloride, or table salt, has accumulated into layers of crust at the resting place of Death Valley’s 9,000-square-mile drainage system. Badwater Basin is the lowest area of the park, plunging to an incredible 282’ below sea level. 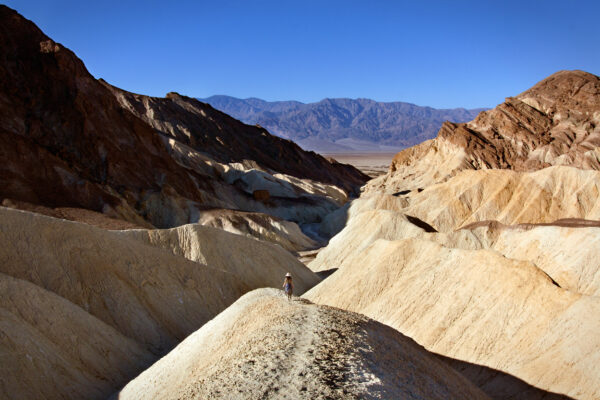 Toward the northern end of Death Valley National Park are remains of the park’s volcanic past. The Ubehebe volcanic field contains about a dozen craters, of which the largest is the Ubehebe Crater which measures half a mile wide and up to 777’ deep. It’s neighbor “Little Hebe” is another “maar,” or explosion pit, volcano. These maar volcanoes erupted as a result of molten lava making contact with ground water and building up steam pressure before exploding through the surface. The Timbisha Shoshone call the area the “burning land” for this reason. They call Ubehebe Crater “Tem-pin-tta-Wo’sah” which means “coyote’s basket.” It is a site of sacred significance to their origin story as the spot in their mythology where they were carried to and, from which they emerged.

In the summer of 1996, Death Valley experienced 105 consecutive days over 105° F and 40 days over 120° F. The desert rocks literally bake with ground temperatures recorded as high as 201° F. Despite the extreme heat, animals have adapted to survive in Death Valley. Many are nocturnal and/or have evolved to require less water, less frequently. Bighorn sheep can go without water for several days. When they do find water, they can rehydrate by drinking several gallons at a time. Kangaroo rats on the other hand do not need to drink water at all. Incredibly this is true. The small rats survive on water from their diet and conserve water by excreting very dry waste. 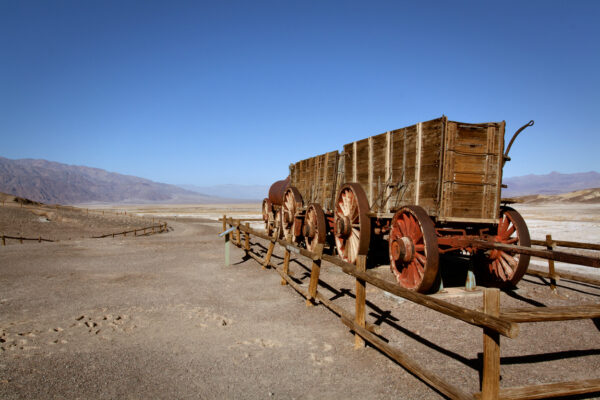 The roadrunner, long popularized by the animated cartoon series “Looney Tunes,” is known to quickly evade their coyote predators. Roadrunners have an unusually high body temperature of 104° F which allows them to function in the daytime heat. Jackrabbits on the other hand, are forced to evade coyotes at night. When they do need to operate in high temperatures, they stay cool by releasing heat from blood vessels in their large ears. While most people won’t get to spot these animals in the vast Death Valley wilderness, they continue to survive thanks to their incredible adaptations.

Humans have also mastered survival in Death Valley’s heat, although most visitors prefer to stay away during summer months. By contrast, winter temperatures are generally mild at lower elevations. If you do plan to visit Death Valley, be sure to have plenty of water and follow precautions laid out by the National Park Service. Enjoy America’s largest, hottest, driest and lowest National Park.

Jeff Perkin is a graphic artist and integrative nutrition health coach. He can be reached WholySelf.com

Animals have been recognized as good companions, an extension of therapy, known for providing emotional support and more.  Residents at Parkview … END_OF_DOCUMENT_TOKEN_TO_BE_REPLACED

PESHAWAR       -           A large number of visitors, including domestic and foreign tourists, continued to throng the Khyber Pakhtunkhwa Pavilion to … END_OF_DOCUMENT_TOKEN_TO_BE_REPLACED

Less than an hour’s drive from the hustle and bustle of Atlanta, Georgia, lies the quaint, southern town of Pine Mountain, Georgia, the gateway to … END_OF_DOCUMENT_TOKEN_TO_BE_REPLACED