In Canoga Park, a groundbreaking ceremony held on November 7 by City and County officials marks the official start of work on a new entry pavilion to the Los Angeles River Greenway.

The new pavilion will consist of two buildings, framing an entrance to the river greenway, each featuring public restrooms. The new structures will support a shade canopy displaying public art. Other components include picnic tables, bike racks, and a drinking fountain.
— Urbanize Los Angeles

The pavilion is the spearhead of the new “kit of parts” LA River revitalization master plan that was adopted by the county in May and includes the $1 billion-plus Taylor Yard G2 site and a total of 22 other new projects spread along the 51-mile-long course stretching from the San Fernando Valley to its southern terminus in San Pedro. 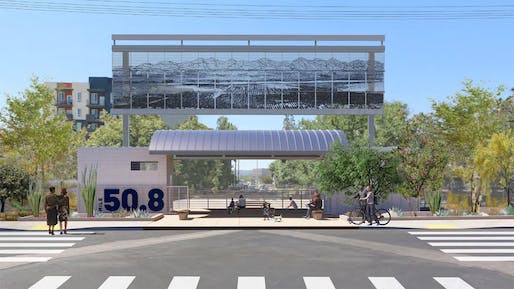 Previously on Archinect: Frank Gehry gets back in on the LA River action with a new Headwaters Pavilion design

OLIN is a collaborator on the project, which provides restrooms and a shade structure to frame the park’s entrance at Bassett Street and Alabama Avenue. Total estimated costs for the design is $5.1 million.

Similar articles on Archinect that may interest you…

Executive director of the Downtown Victoria Business Association says he wants to see a fee structure that is fair and reasonable, and design … END_OF_DOCUMENT_TOKEN_TO_BE_REPLACED

Funding is currently available through the state of California for small landscaping businesses to purchase new zero-emission landscaping equipment. … END_OF_DOCUMENT_TOKEN_TO_BE_REPLACED