This pioneering rehabilitation garden in Alnarp, just outside Malmo, spreads over 1.5 hectares and has been designed so that the mood gradually shifts from the formal (greenhouses, raised beds and hedges, say) to the informal (large trees and long views).

The Alnarp Rehabilitation Garden was established in 2001.Credit:Anna Maria Palsdottir

“There are different themes in different parts of the garden because when we took people there we wanted to see their reaction, where they went and what they wanted to do.”

What they noticed is that whether participants were born in Sweden or migrated from the Middle East, whether they grew up in cities or in the countryside, they all gravitated towards the same sort of areas.

“People liked the more natural vegetation that was not too strict and not too formal, because that set off feelings of demanding landscapes that have to be taken care of,” Palsdottir says.

In what will interest all people wanting to make gardens that feel good to be in, she says people were also drawn to areas where there was vegetation of different heights, including a lower, middle and upper storey, and the feeling of “rooms”, which help foster a sense of safety.

People liked there to be seasonal flowers, scents and sounds as well as a range of textures. Palsdottir says the presence of water and stones was also vital because they made people “feel part of a whole ecosystem and at one with nature”. 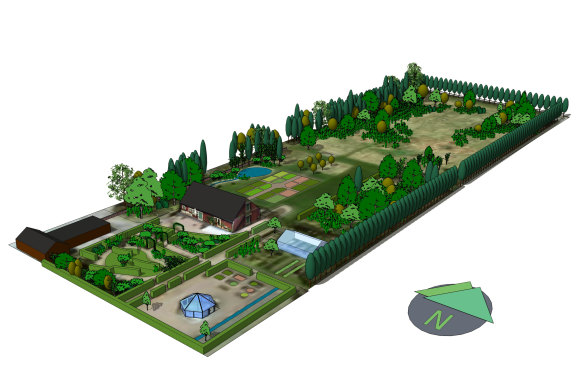 A map detailing the different zones of the Alnarp Rehabilitation Garden.Credit:Gunnar Cerwén

Palsdottir, whose first job was propagating plants for a big Icelandic nursery, says the “game changer” for her was working at a botanical garden in Reykjavik where she was charged with caring for visiting children. “I just had to follow them around and see what they wanted to learn about. They didn’t want to read the signs they wanted to see this little bug or something on the ground. They had fun and I thought this has to be fun for grown-ups too.”

She began doing a master’s in environmental psychology, moved to Sweden and, in 2007, started conducting research at the Alnarp Rehabilitation Garden. Her findings are now being applied to health policy and planning.

While some pioneering programs exist in Victoria, including one run for almost two decades by Steven Wells at Austin Health and the more than 40-year-old Kevin Heinze Grow, associate professor at the University of Melbourne John Rayner, who runs a therapeutic horticulture subject as part of an urban horticulture program, says there is room for more local initiatives.

He says he hopes Palsdottir’s talk will encourage more discussion about the place for formal horticultural and nature-based intervention programs that can be tailored to suit an individual’s needs.

The Therapeutic Horticulture Australia Conference 2022 is online and at the University of Melbourne’s Burnley Campus on 1 October.

This week, the morning lows were under 60 degrees in the Greater Houston area. Houstonians took their dogs out for walks, drank margaritas on the … END_OF_DOCUMENT_TOKEN_TO_BE_REPLACED

FANS expecting to see Jason Donovan at the Cliffs Pavilion have been disappointed the last two nights. Jason, alongside Alexandra Burke, start in … END_OF_DOCUMENT_TOKEN_TO_BE_REPLACED

You might know me as the plant lady who for years has attended the Village meetings requesting better services, with scant results.I have been told by … END_OF_DOCUMENT_TOKEN_TO_BE_REPLACED

There is a real upside to two new sweet potatoes making their debut in 2023. I mean that tongue and cheek as that is actually part of their name, but … END_OF_DOCUMENT_TOKEN_TO_BE_REPLACED