A NEW year and a new start! This means that you can make some new decisions for the 2023 garden and do a little planning to make them happen. An option may be as simple as choosing some different varieties of seed to sow this year, or it may extend to turning your lawn into a carefully laid out vegetable plot.

If something works well, then there’s no need for change, but we all have some things that are maybe in the wrong place. Take a look at the garden – are some trees and shrubs too big for where they are growing? Can the problem be solved by some winter pruning or should you remove the offending plant and replace it with something more appropriate? Maybe you have a space for a new raised bed or a rockery? Or maybe it’s a path that’s needed or a pond in a boggy area.

A fine bright day at this time of year, is perfect for getting outdoors and making some wished-for changes. It’s always a delight to watch a new plan come together and to watch a garden grow and flourish.

Have your leeks started to stretch? If they have survived the cold weather without turning to mush, then pat yourself on the back for growing a good winter-hardy variety. In an average winter, these leeks can stand well until March, but after a spell of freezing and thawing, plants may start to push up a bolting shoot from the centre. These long spikes have a hard stem and a large bud at the top. They have a slimy sap-filled centre and aren’t good to eat. You can snap off the bolting tops as soon as you spot them, but you need to lift and use the remaining parts of the plant as soon as you can. There will be less to eat on each plant once the central shoot is removed, but the surrounding leaves are still tasty.

Loosen the roots of plants if you want to delay bolting. You can lift plants altogether and heel them back into the ground again. Breaking the roots in this way will slow down the bolting process.

Time for a feed

Wood ash is a good plant food that is rich in potash. Make sure the ashes are from a woodfire only and not one that has burned other fuels. Wood ash dissolves quickly and washes down into the soil so it gets down to where the roots of plants can take up the minerals. Feeding plants now, allows plenty of time for nutrients to reach where they are needed – ideally this point coincides with new growth starting as temperatures rise a little.

Wood ash is a good feed for onions, garlic, raspberries, fruit trees and cabbages. It can also be used to give a boost to overwintered broccoli, spinach, kale, cauliflower and chard. Weed around plants and mow grass around fruit trees before sprinkling the ash. Don’t apply on a windy day or half of the ashes will blow away!

Rhubarb stems started to emerge just before the cold snap. They grew a little and then halted for a while as they sat with a cap of snow and ice in the garden. Stems grow from a large crown, most of which is underground. New stems have a massive food store in this crown to set them growing. They are pretty hardy plants, but if you want these very early young shoots to keep growing, you should provide a little protection. 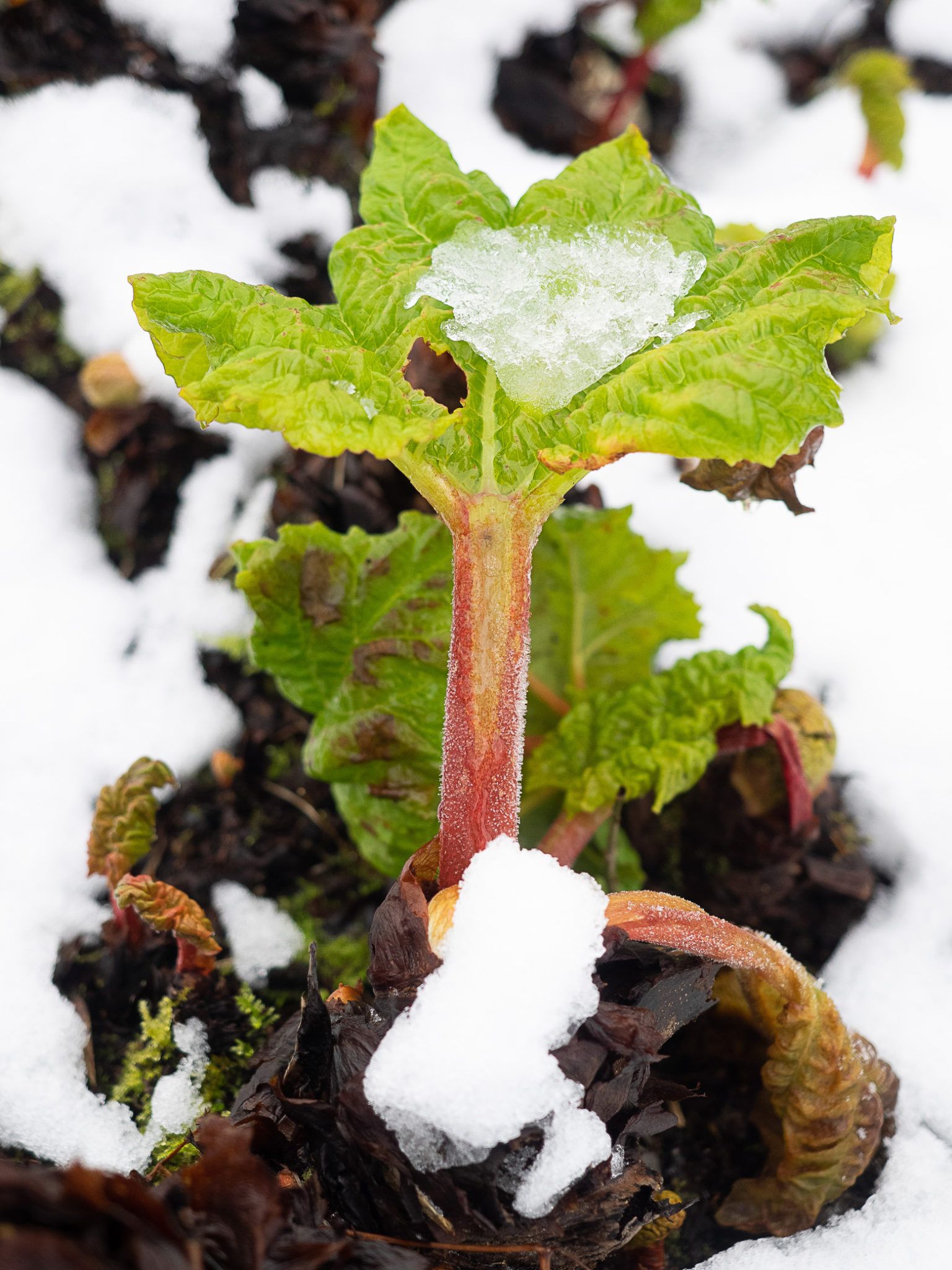 Cover the crown, as best you can, with a layer of well-rotted manure or compost. This gives an extra insulating layer as well as providing nutrition throughout the growing season. If you haven’t got either of these, then scatter some fish blood and bone meal. You can cover the young stems with a large black bucket – weigh this down with a stone so it doesn’t blow away. This excludes light and forces the stems to grow long and pale as they stretch upwards. This will give you the earliest harvestable rhubarb, but there is a down side. Crowns that are forced in this way, seldom do well for the rest of the season. They may recover enough to grow stems next year, but only if you don’t harvest any after this first flush of forced ones.

I prefer to put a layer of crop cover over rhubarb plants and if the weather is cold a double layer is appropriate. This lets enough light through for growth of red stems with green leaves and the plant won’t suffer from this treatment.

Covering plants now also prevents birds scratching in the manure mulch – all goodness is retained close to the plant and the mulch stays neat and tidy where you want it.

Duke made 55.7% of its shots from the field and recorded 24 assists, which were season highs both allowed by the Jackets and also attained by Duke. … END_OF_DOCUMENT_TOKEN_TO_BE_REPLACED

VISUAL artist Kate Wise has set herself a new year’s resolution to be in her Ballarat gallery every weekday and to paint on site. The Haddon creative … END_OF_DOCUMENT_TOKEN_TO_BE_REPLACED