Last week I sat in the woodland garden at Stonefields for the last time. Paul Bangay is selling the garden he has spent the past 17 years bringing to stunning maturity and it seems unlikely that the new owners will be as welcoming.

Stonefields is surely Australia’s most famous private garden. It has featured on television, in books and magazines, and Bangay himself has written a couple of books about it. He’s also been generous in sharing its beauties: tens of thousands of visitors have been drawn to Open Garden weekends that raised money for Stephanie Alexander’s Kitchen Garden Foundation; others have paid more to visit in small groups on selected days in spring and autumn, and it’s been opened to garden tour groups, which is how I have been fortunate enough to visit often enough to have favourite places at different times of the year.

In spring I’m drawn to the round woodland garden where the embrace of fresh green is occasionally lit up by glowing white dogwoods and clouds of Viburnum sargentii above arching Solomon’s seal and big fat hostas. I sit on the curved concrete faux bois bench and breathe in the serenity created by the birdsong, the enveloping arc of soft-leaf greens and the narrow entrance which makes entering this space feel like an exhalation.

Each time I visit I vow to simplify my home garden to create this same sense of peace. It’s not the only thing I’ve learned at Stonefields.

Here are a few more – hedges are cheaper in the short term than walls but much more expensive in the long term; apples picked straight from the tree cannot be surpassed; Malus floribunda holds its flowers longest of the crabapples; wisteria trained along steps and kept well-trimmed makes a delicate green lace frill; don’t be mean with the scale of an outdoor construction. 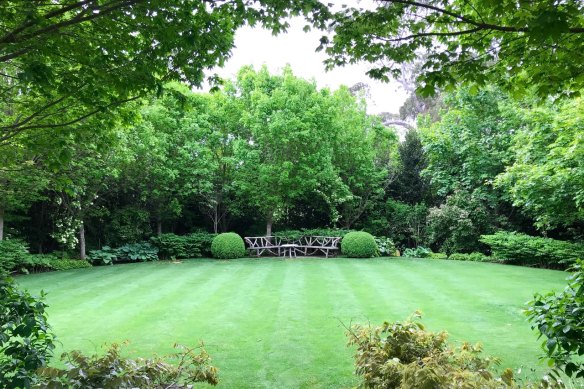 One more thing I learned – gardeners can’t stop experimenting. The first time I visited I was struck by the genius of the pool lawn. This space features a slim, rectangular, green-tiled pool on the axis of the rill that starts at the entrance court on the other side of the house. Alongside the pool are flat tables of trimmed box and surrounding the lawn are deep beds of perennials in russet tones that in summer and autumn match the tawny beiges of the grasses in the valley beyond. The edge of this lawn was itself like an infinity pool, with the soft lush green veering into the view.

The next time I visited Bangay had interrupted that infinity line with a new terrace of double perennial borders in deep blues, purple and reds. I missed the sense of expansion that the lawn had when it surrendered its edge to the valley, but having created a formal garden of exacting precision it was only natural that Bangay now wanted to play with some flowers.

His next project will be simpler than Stonefields, he says, looser, a bit more romantic. “I reckon I can see one more garden to maturity if I start now.” I can’t wait to see it.

The Katara Traditional Dhow Festival, organised by Katara - the Cultural Village and based on the region’s maritime heritage, continues to dazzle as … END_OF_DOCUMENT_TOKEN_TO_BE_REPLACED

DAYTON, MN - (NewMediaWire) - November 29, 2022 - A property's landscape is an extension of the indoor living space, and the landscaping experts at … END_OF_DOCUMENT_TOKEN_TO_BE_REPLACED

Gardening for everyone is the focus of RHS Malvern Spring Festival 2023. Helping to make gardening and horticulture accessible to all, the show will … END_OF_DOCUMENT_TOKEN_TO_BE_REPLACED