While transforming my current sterile urban yard into a nurturing eco-habitat a question I confronted was: what plants to keep, and what plants to remove?  It is not just a matter of adding native plants, but also of subtracting potentially harmful vegetation (or just plants that don’t have much wildlife benefit).

When I lived in Central Oregon, there were several noxious plants that I knew to look for and pull up. One of these is Spotted Knapweed, a composite in the aster family with lovely purple flowers that belie its true nature.  This is a very aggressive weed native to Europe. The roots produce a chemical that kills seedlings of other plants. It is unpalatable to grazers and quickly regenerates after wildfire. This one definitely had to go!

There are many resources for finding out what alien invaders are on the ‘Bad Plant!’ list. These tend to be super spreaders that overwhelm, or even kill off, native species.  Some, unfortunately, including English Ivy, Butterfly Bush and Japanese Honeysuckle, are plants beloved by gardeners.

Even Bob Vila of This Old House fame had a list:

The 15 Worst Invasive Plants in America

‘Many of the most invasive plant species thriving in the United States came from elsewhere—mostly Europe and Asia. While they are often beautiful, these plants spread rapidly in an environment that has not evolved to keep its growth in balance. https://www.bobvila.com/slideshow/the-15-worst-invasive-plants-in-america-52958

The invasive Plant Atlas of the United States, developed by The University of Georgia – Center for Invasive Species and Ecosystem Health and the National Park Service, is a great resource.  It lists species of all types of invasive plants (and there are a lot!), and gives maps of where each has been found.

In his Homegrown National Park presentations, Doug Tallamy highlights a number of common exotic species that do not support wildlife.  One is the Callery Pear, a graceful fruit tree with beautiful spring blossoms. But it does not host any North American species of moths or butterflies and is sprouting up all over the place.

Another nasty is the Tree of Heaven, Ailanthus altissima, with feathery compound leaves that resemble native sumac. Like so many non-native plants, the Tree of Heaven has been popular with landscapers for its lack of native insect or disease problems.

But here are all the downers for this exotic:

‘ ‘The Tree of Heaven is an invasive species that grows just about anywhere its seed lands, in the poorest of soils, with very little water, and even out of cracks in cement. However, it is not only its rapid growth and spread that has made the tree of haven one of most dreaded invasive species. It also has a bad record for being allelopathic, preventing other plants from growing nearby.1 The tree produces a lot of pollen which can cause allergies, and its leaves, branches, seeds, and bark can irritate the skin. If that wasn’t enough, tree of heaven is also the main host for the spotted lanternfly, a highly destructive pest from Asia that was discovered in the northeastern United States in 2014.’

Read more on Ailanthus at: https://www.thespruce.com/tree-of-heaven-invasive-plant-profile-5184401

There are so many bad plants to watch out for!

In Central Oregon I was especially alert for Eurasian Cheatgrass (Bromus tectorum) which has become a major problem in the Western U.S. Dog owners must take care since the spiky seeds can burrow into skin like miniature porcupine quills.  The vet had to remove a cheatgrass seed that had found its way deep into our Australian Shepherd’s ear.  Cheatgrass infests rangeland and disturbed sites; it outcompetes native grasses and makes landscapes more fire-prone. 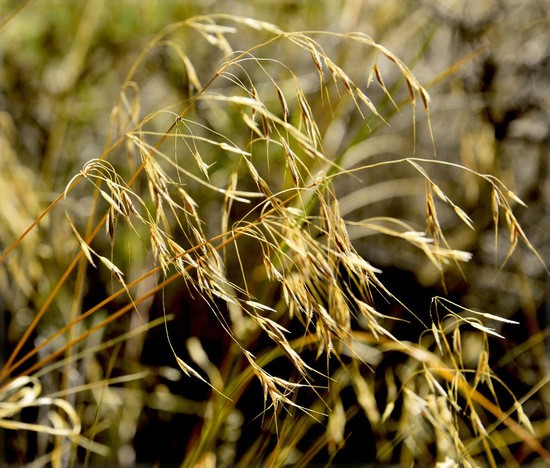 Cheatgrass seeds that burrow into skin, growing in Central Oregon

I was surprised to see a plant in my current yard, periwinkle, Vinca minor, marked as a problem:

‘The Invasive Plant Atlas says it’s “invading natural areas throughout the Eastern U.S. It inhabits open to shady sites including forests and often escapes from old homesites.” The State of Indiana says: “Once established, Vinca minor forms a dense carpet to the exclusion of other plants. This creates a problem where it is competing with native flora.” Moving west, a California source says it “tends to become invasive in hot Mediterranean climates.”

“Invasive” Ground Covers and the Case for Allowing Periwinkle

There were several clumps of periwinkle in the yard, and they were sending out tendrils.  I know Vinca is a popular groundcover that does well in sun or shade, and has pretty blue flowers. But it has no real wildlife value. I have been tearing it out, root and tendril.  I plan to replace the Vinca with Kinnikinnick, or bearberry, a evergreen groundcover in the heath family, with spring blooms for early bees, fall berries for birds, plus hosting caterpillars of many butterflies and moths.

Have you had problems with alien invasives, or just problem plants?

Whether you're an experienced home gardener or plant-averse, gardening at home has plenty of benefits. Anything from avoiding pesticides—which have … END_OF_DOCUMENT_TOKEN_TO_BE_REPLACED

"The Last of Us" begins in the Boston quarantine zone, and has featured plenty of iconic landmarks for Beantown aficionados. For example, the series … END_OF_DOCUMENT_TOKEN_TO_BE_REPLACED