I first got involved in the native plant movement because of my fondness for butterflies.

Most would think first of milkweed and Monarchs, but there are many more butterfly species to admire.

Here is a website with photos of butterflies you might see in your garden, or in local parks, depending on where you live:

The North American Butterfly Association has great information about butterflies, including their Butterfly Garden and Habitat Program: “Create a paradise for butterflies while encouraging habitat restoration, no matter how large or small an area you have.”   https://www.naba.org/

The e-Butterfly website compiles sightings of butterflies around the world, useful for finding where butterflies are likely to be.     https://www.e-butterfly.org/

Each butterfly needs specific host plants for its caterpillars to chow down on. Of course this goes for moths too, which I’ll post about later.

Doug Tallamy, who leads the Homegrown National Park project, is a huge advocate for native plants that host butterfly and moth caterpillars for birds to feed their nestlings, and to metamorph into lovely Lepidoptera.  The reason for plant host specificity is that each type of plant makes its own toxic chemicals to deter insect munching, and specific butterfly or moth larvae have evolved ways to dine on those toxin-laden leaves.

I planned to add trees, shrubs and perennials to my yard that would host butterflies in my region of the Pacific Northwest.

A great source for finding out what plants butterflies need for their larvae is the organization Butterflies and Moths of North America (BAMONA)    https://www.butterfliesandmoths.org/

BAMONA continually updates sightings of species of both butterflies and moths submitted by contributors. It also gives information known about each species.

On the BAMONA website, under the heading Species Profiles, there is a Regional Checklist app that provides a list of butterfly, or both butterfly and moth, species for each state, down to county level, in the United States (or for regions in other North American countries).

Then, click on the name of any species listed in a Regional Checklist to view the Species Profile, which shows sightings of the species on a map, gives information about the species and presents contributor photos of both adults and caterpillars.

For example, here is some of the information for the Great Spangled Fritillary: www.butterfliesandmoths.org/…

Range: Alberta east to Nova Scotia, south to central California, New Mexico, central Arkansas, and northern Georgia. Comments: The most common fritillary throughout most of the eastern United States. 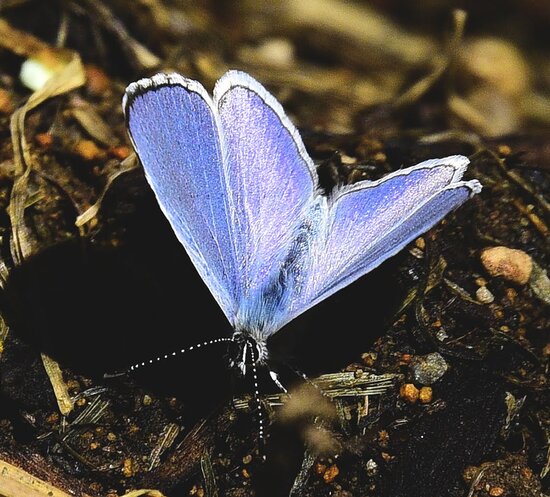 Echo Azure in early spring getting a drink from damp soil

The Western United States has lots of fritillary species, and I have planted native violets in my yard to hopefully attract some of them.

Many butterflies are not as spectacular as Monarchs, swallowtails, or fritillaries.  Some are pretty darn small and you have to look carefully for them.

Butterflies that appear early in spring include the tiny Spring Azure, with a wingspan of just 7/8 – 1 3/8 inches. These occur in the eastern half of the United States. In the West there is a similar species, the Echo Azure, which enlivens the garden with its bright blue wings. 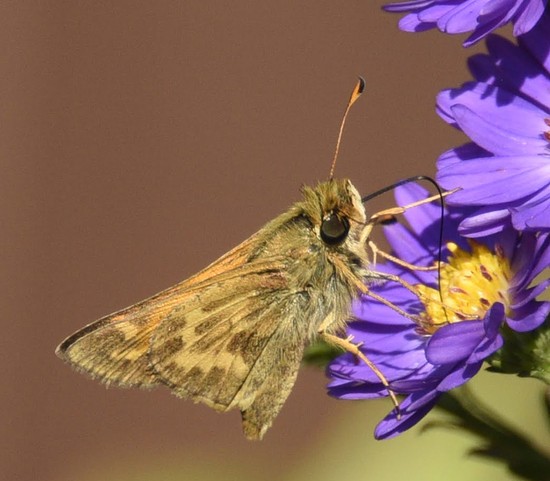 Sachem in late summer sipping nectar from an aster flower

Skippers are also small. These little cuties are common, but usually dull in color and hard to spot. The Sachem, with a wingspan of one and a quarter to one and half inches, is found across the United States. I saw them in late summer in my and other neighbor’s yards.

Any white butterfly flitting around your garden is likely a Cabbage White. Some vegetables in the mustard family, like cabbage, kale and cauliflower are among its hosts. But hey, more caterpillars for the birds!

MAHONING COUNTYMaster Gardener volunteer training. Beginning Feb. 7, this 12-week course covers everything from fruit to perennials and soils to … END_OF_DOCUMENT_TOKEN_TO_BE_REPLACED

BUY TICKETS Prefer a hi-fi sort of Sunday session to basic beers at the pub? Well, you're in luck because Poodle Bar & Bistro is here to elevate … END_OF_DOCUMENT_TOKEN_TO_BE_REPLACED