Now is not a good time to tell Melissa Grafenauer to stop and smell the roses. Actually, there might not ever be a good time for that.

On a mission to keep thousands of flowers and dozens of gardens perky and primped, UND’s full-time horticulturist and landscape specialist is forever on the go.

“I love to be out and about. I need to be moving,” Grafenauer says. “I think that’s one of the best parts of my job. I love that it’s seasonal and there’s work to be done all year round.”

Now, just weeks before UND Homecoming — and at a time when most other Grand Forks gardeners have all but given up on their scraggly fuchsias and long-legged petunias — Grafenauer says she’s just getting geared up for the fall floral show. 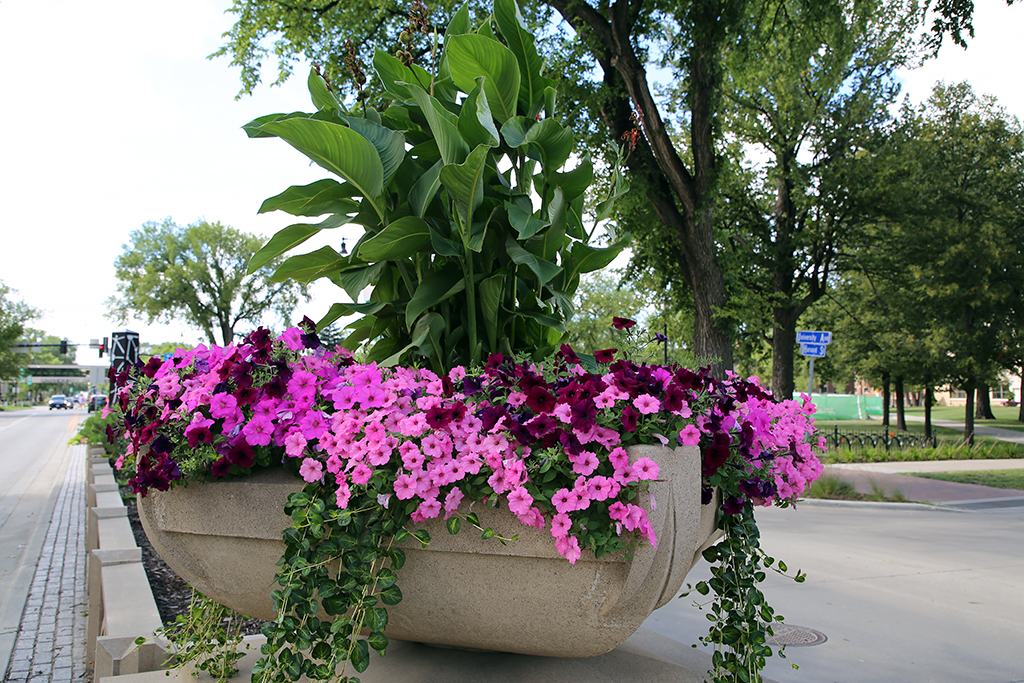 Down the center of University Avenue, giant canna lily flowers seem to reach for the sky. They are skirted by trailing vines and petunias in bright shades of pink and burgundy. Grafenauer says the 200-plus canna bulbs spread across campus must be dug up each fall so they can be overwintered indoors and replanted in the spring. At $12 a pop for each bulb, she says the extra work is well worth it. Photo by Janelle Vonasek/UND Today.

When UND Today was lucky enough to catch up with the lifelong gardener recently, she was nursing double bee stings — a hazard of the job when dipping your hand into an irrigation valve box — and eagerly awaiting the arrival of a jumbo order of frost-hardy mums.

The bold bursts of purple, orange and burgundy blooms are destined for the permanent planters running up and down the center of University Avenue, she said, as well as the 60-some giant pots spread across campus. 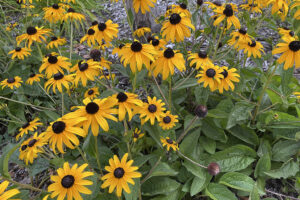 They’ll all be dressed with bits of birch, ribbons of burlap and clusters of flowering green-purple-pink kale.

“I just love getting into the design of the gardens,” Grafenauer said. “I don’t like to do exactly the same thing every year. That would be boring. I like to surprise people and sometimes throw in something they maybe haven’t seen before.

“It’s so much fun to see people stop and say, ‘Oh my gosh, that’s so pretty’ and then take a picture. That makes my day. I want people to love the flowers just as much as I do.”

And when it comes to flowers, Grafenauer has a lot of love.

Before joining UND in 2018, she trained as a horticulturist at the University of Minnesota-Crookston and worked with the Grand Forks Park District for 14 years.

There, she was so well-known for her green thumb — and her show-stopper gardens in the city-owned University Park — that she was the go-to expert for a consultant who was helping UND develop a job description for hiring its own horticulturist. 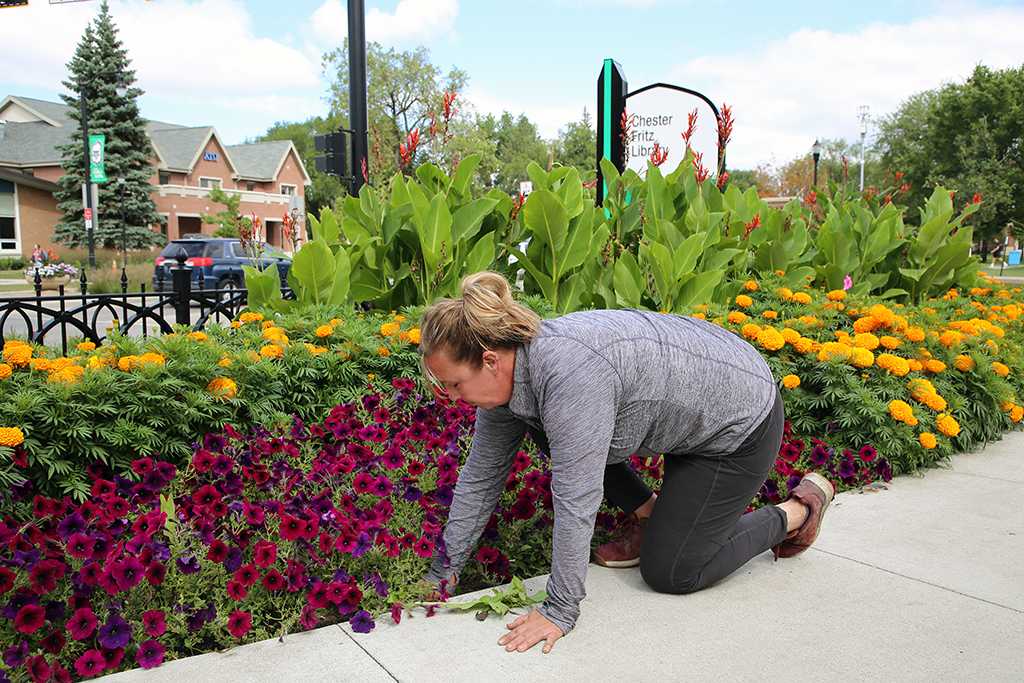 Grafenauer gets after a few weeds in one of the new gardens that greets visitors outside the Chester Fritz Library. Photo by Janelle Vonasek/UND Today. 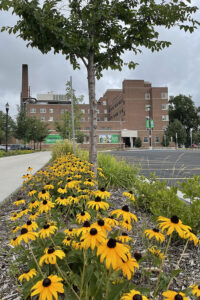 Grafenauer explained that UND Facilities Management had wanted to “up its game” at the time in anticipation of several upcoming construction projects — the redesigned pedestrian-friendly University Avenue, the brand-new Memorial Union and Nistler College of Business & Public Administration, to name just a few.

“As part of the building construction contract, they had hired landscape architects to do all these fancy designs, and they wanted to make sure they had enough staff and knowledge to maintain it all,” she said. “I think they were looking for someone who was familiar with our soil, someone who knew what does and doesn’t grow well here and other sorts of things like what can get in the way of the snowplows.

“In my head, I kind of went through all of the things I did for the Park District and then thought to myself, ‘Gee, maybe I should apply for this job.’”

Three months later, she did just that and was hired. About a year later, her former Park District co-worker and arborist Jared Johnson joined her at UND.

“We share an office now, and we really work well together,” Grafenauer said. “We’re nerding out about plants all the time. I’ll be telling him about something new I’m trying at home, and he’ll be sending me pictures of what he’s doing in his yard. We brainstorm and bounce a lot of ideas off each other.”

It’s a professional partnership that has proved to be just the right mix for UND, too. 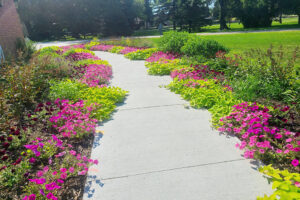 In just a few short years and during one of the University’s greatest architectural growth spurts, the campus landscape also has been transformed. Where there once were only concrete-gray parking lots, now there are perennial rain gardens swimming in rivers of bright-yellow and pink Rudbeckia.

Elsewhere, scrappy bushes and tired trees have been replaced and skirted with mulch beds filled with ornamental grasses, petunias and 6-foot-tall cannas topped by red and orange blooms.

In every corner and at every turn, there are new gardens and splashes of brilliant color. And to borrow from a gardener’s vernacular, every pot has its thrillers, fillers and spillers. Flowers frame the brick buildings, hug the walkways and line the length of the frilly iron fences.

“I absolutely love my job. It never gets old,” Grafenauer says. “It seems like a mad rush to get all those tiny flower plugs perfectly spaced and tucked in the ground, but your reward is watching them grow.

“You see people smiling and looking around, and you just know it lifts people up. For me, I can’t even let a cloudy day define my mood because, guess what, a cloudy day just makes the flowers and landscape look all the more vibrant.”

Gardens on display: Gardens of all types will be on display for the general public to see in Tocumwal. … END_OF_DOCUMENT_TOKEN_TO_BE_REPLACED