When my mother, Fulnahar Begum, arrived in England in the 1980s from Bangladesh, she remembers looking out from the plane and wondering where on earth she’d come to. “Everything looked so grey and miserable. It was very different from what we were used to.”

At customs, she was worried when an officer pulled a crumpled brown envelope full of seeds from her suitcase. Her own mother, Abijan Bibi, had told her to scatter them in her new home, saying: “That way a piece of this land will always be with you.”

My mother grew up in Sylhet, in north-east Bangladesh, an area known for picturesque hills and tea plantations. Her home in the remote village of Borokhapon is surrounded by lush fertile plains and golden rice fields. Sylhet’s tropical monsoon climate is perfect for subsistence farming, and most families there live off the land. In an enclosed courtyard outside her house, coconut, banana and jackfruit trees provide shade from the sweltering sun, and mangoes, oranges and lemons hang at arm’s reach.

“Luckily the officer let the seeds through,” laughs Begum, now 74, who settled in the leafy suburb of Ealing, west London. Every morning when she looks out on to her garden she is reminded of home. “It’s more than just an ode to my homeland,” she says of her love of gardening. “It’s everything that we are – and that needs to be nurtured daily.”

My mother spends hours every day tending her garden; it’s an oasis of calm in brilliant, astonishing greens. Large, velvety leaves from taller plants create a criss-cross canopy; the rustling wind encourages the foliage to interconnect, offering shelter and protection for the more tender plants beneath. “My children grew up in this garden and now my grandchildren spend their summers here,” she says.

With many traditional Bangladeshi vegetables unavailable at local supermarkets, British Bangladeshis have taken to growing their own. Today, there are almost half a million Bangladeshis in the UK, most of whom hail from rural Sylhet, where agriculture is a way of life. “Most families cultivate their land together, with each person playing a key role,” says Begum. “It’s a team effort, with everyone keen to preserve techniques that have been passed down for generations.”

My mother spends hours every day tending to her garden; it’s an oasis of calm cloaked in brilliant, astonishing greens

For British Bangladeshis, gardening is a way to stay connected to their roots and the wider community, and the sharing of vegetables is commonplace. For many families, cultivating vegetables has also become a cheaper and more convenient way to get fresh produce, and proved particularly useful during lockdown, when supermarket shelves would quickly empty.

In my mother’s garden, hanging baskets and terracotta pots of aromatic herbs, including coriander, rosemary, fenugreek and mint, release scents both familiar and foreign. This year, she has grown aubergines, pumpkins, tomatoes, carrots, radishes, parsnips, red amaranth, courgettes, green beans and naga chillies. “The lau is my favourite,” she says, referring to her bottle gourds, which hang in a row in all shapes and sizes beneath a sangari – a wooden, handcrafted pergola. “They’re my bottle gourd babies!” she says dotingly.

She isn’t alone in her love of the bottle gourd, which is an ornamental oddity for Brits but a staple for Bangladeshis. The green hard-shelled plant varies in shape and size depending on how it is grown and when it is harvested. Once peeled, its tender white, mildly sweet flesh is chopped into cubes and typically added to meat or fish dishes such as murgi lau, a chicken curry. It is also used to make murabba – a dessert usually served on special occasions. 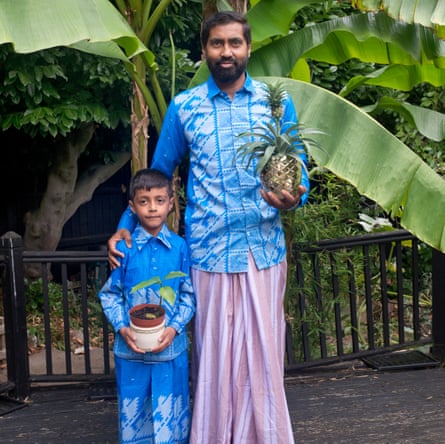 A quick YouTube search for shoker bagan (which loosely translates as “garden hobby”) brings up hundreds of videos of Bangladeshis showcasing their gardens, sharing tips and offering guidance. One of these channels, Bagan r Bagan, belongs to 50-year-old Azad Ali, who recently switched to working part-time so he could spend more time on his garden.

Ali grew up in a flat in north London with a tiny balcony where he would grow a few plants. But six years ago, wanting somewhere quieter and greener, he moved to a large detached house in Luton, Bedfordshire, where he now lives with his wife and three children. 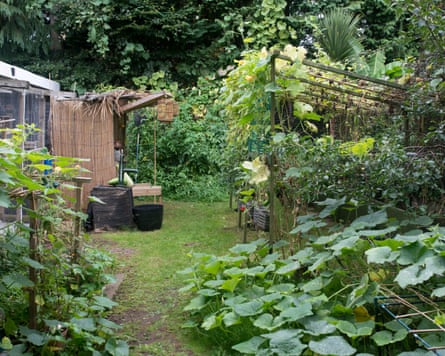 He quickly began creating the garden of his dreams. Today, it is a tropical paradise bursting with pineapples, mangoes, bananas, kiwis, papaya, cucamelons, pomelo and shatkora – a semi-wild citrus fruit native to Sylhet. Tall palms, bamboo and leafy climbing vines give his garden a jungle feel.

“The national fruit of Bangladesh, the khatol [jackfruit] is a personal favourite,” says Ali, “but it’s near impossible to grow in the British climate.”

Yet summer droughts and flash floods have not deterred Ali, who points out a tiny jackfruit tree growing next to his thriving banana tree.

Ali often experiments with tropical vegetables by incorporating climate-friendly methods used in flood-prone Bangladesh, including companion planting – the careful placement of plants that have beneficial effects on one another. He has even tried to imitate Bangladesh’s floating gardens by creating a pond with a hydroponic system, in which plants grow in water on a floating organic bed of water hyacinth, algae and other plant residue.

Gardening became a bonding activity for Ali and his sons during lockdown. His youngest, eight-year-old Yaqub, has carved out a patch for himself where he’s begun growing his own fruit and veg.

The only way to get a look behind the scenes of our brand new magazine, Saturday. Sign up to get the inside story from our top writers as well as all the must-read articles and columns, delivered to your inbox every weekend. 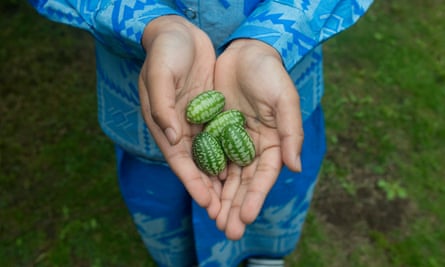 “It’s really important to encourage young people to connect with nature instead of constantly being on their phones,” Ali says.

A little further north, fellow Bangladeshi Mohammed Shah Elias, 60, has been working his allotment in Walsall, in the West Midlands, for almost a decade.

“I come here once – sometimes twice – a day if I can get away!” laughs Elias, who often escapes to his allotment from his busy multigenerational home. “It’s so quiet and peaceful here. It brings me so much joy being able to still do something I love – and has helped keep me active, reduce stress and lower my blood pressure. And just walking around admiring the fruits of one’s labour feels nice.”

He grows marigolds, sunflowers and peonies, as much for their beauty as their scent. A lovely soft intertwining of jasmine, rose and night-scented stock lingers among rows of tomatoes, cucumbers, aubergines, pumpkins, turnips and spinach. He has also accumulated a variety of gourds in every form – pointed, wax, ridge, fig-leaf and, of course, the much-coveted lau – alongside apples, pears, cherry, gooseberry and plum. 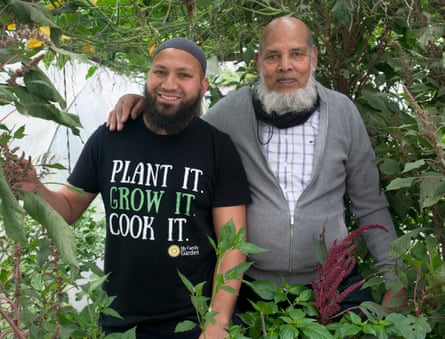 Elias’s father taught him how to garden from a young age. “In our village, if you couldn’t grow your own food, you wouldn’t eat,” he says.

As Bangladeshis, it’s important that we don’t forget our rootsMohammed Shah Elias

He has saved money during the cost of living crisis by eating only his allotment-grown fruit and vegetables. Other Bangladeshi families have taken to selling their homegrown produce to takeaways and grocery stores as a way to make extra cash.

Elias’s plot costs him £120 a year, but since the prices of compost, fertiliser and plant food have risen, Elias has begun making his own. “Proper homemade fertiliser is one of the best things you can do for your garden and results in bigger, healthier and overall happier plants,” says Elias, who uses everything from raw food scraps, banana peel and used tea leaves to egg shells and recycled green waste from the allotment. 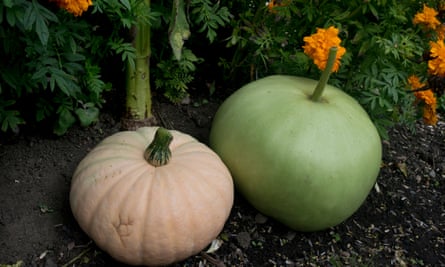 The sheer abundance of Elias’s harvest this year meant he had a lot of surplus to share with friends, family and neighbours. “I love the community spirit of gardening,” says Elias, who has become friends with many people he would not normally have crossed paths with.

Though there are gardeners of several ethnicities at the allotments, Elias is the only Bangladeshi, but with gardening becoming increasingly popular among younger people, he hopes this will change. His nephew, Mothin Ali, has started a YouTube channel, My Family Garden, which attracts thousands of views each month, and is the founder of #DigItOut, a campaign to promote diversity in British horticulture.

“As Bangladeshis, it’s important that we don’t forget our roots,” says Elias as he carefully places his bottle gourds, one by one, into a nearby wheelbarrow. “The harvest reminds us how generous the Earth is. The more you give, the more it gives back. It takes hard work and patience – but it’s always worth it in the end.”

Summer is here, and this week Gardening Australia celebrates the bounty of summer gardens. The episode is also recognising International Day of People … END_OF_DOCUMENT_TOKEN_TO_BE_REPLACED

The Katara Traditional Dhow Festival, organised by Katara - the Cultural Village and based on the region’s maritime heritage, continues to dazzle as … END_OF_DOCUMENT_TOKEN_TO_BE_REPLACED

DAYTON, MN - (NewMediaWire) - November 29, 2022 - A property's landscape is an extension of the indoor living space, and the landscaping experts at … END_OF_DOCUMENT_TOKEN_TO_BE_REPLACED