Just in time for the 2023 EPCOT International Festival of the Arts, Henna tattoo art is now available in the Morocco pavilion.

You can find Henna artists next to Lamps of Wonder, which houses the Princess Jasmine (and sometimes Aladdin) meet and greet. 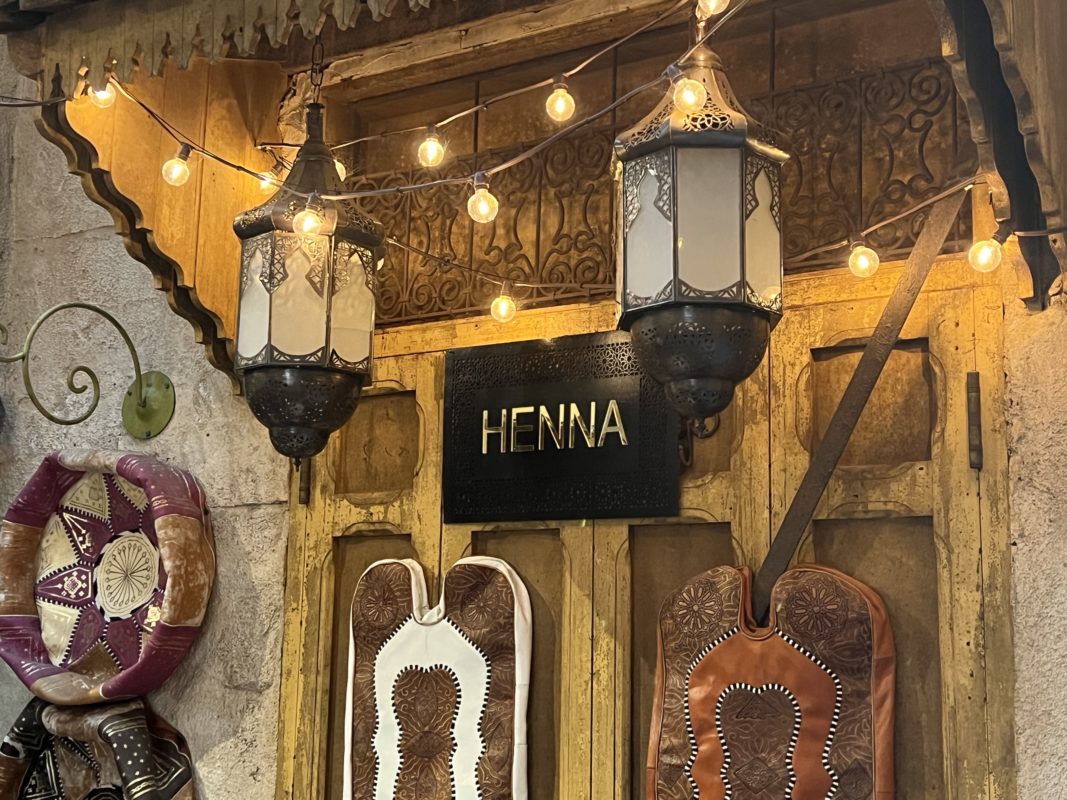 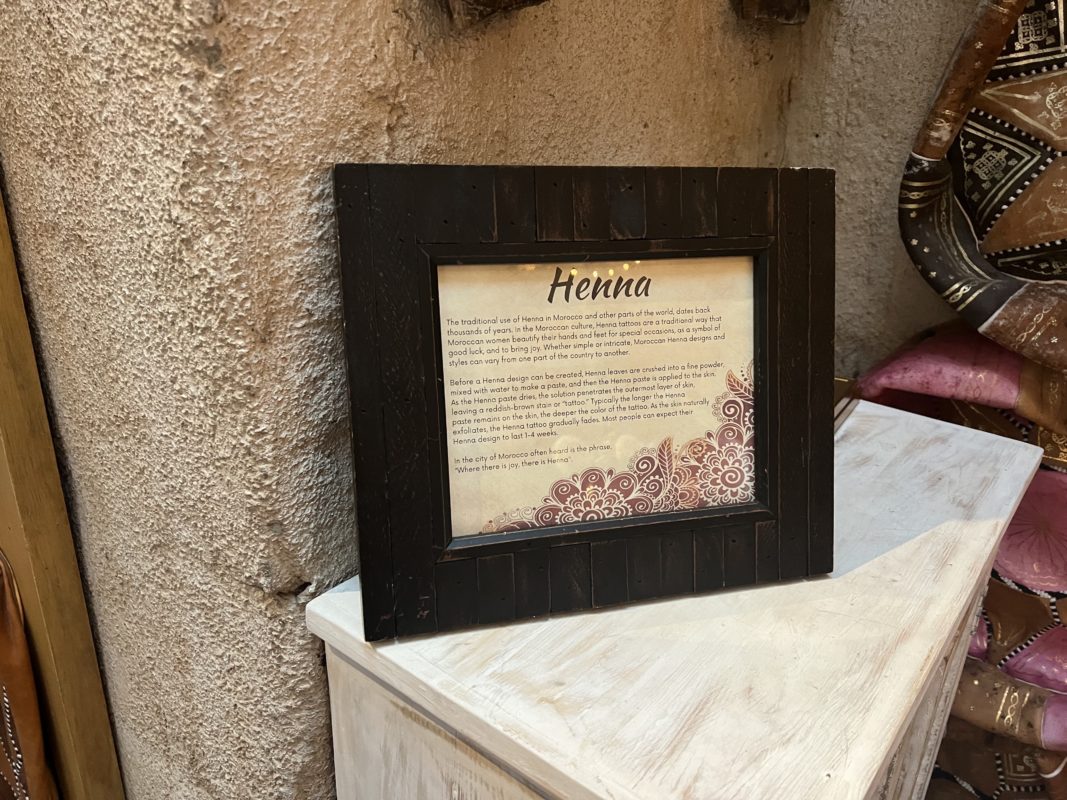 In the image above, the art of Henna is explained.

It reads, “The traditional art of Henna in Morocco and other parts of the world dates back thousands of years. In the Moroccan culture, Henna tattoos are a traditional way that Moroccan women beautify their hands and feet for special occasions, as a symbol of good luck, and to bring joy. Whether simple or intricate, Moroccan henna designs and styles can vary from one part of the country to another.

Before a Henna design can be created, Henna leaves are crushed into a fine powder, mixed with water to make a paste, and then the Henna paste is applied to the skin. As the Henna paste dries, the solution penetrates the outermost layer of skin, leaving a reddish-brown stain or “tattoo.” Typically, the larger the Henna paste remains on the skin, the deeper the color of the tattoo. As the skin naturally exfoliates, the Henna tattoo gradually fades. Most people can expect their Henna design to last 1-4 weeks.

In the city of Morocco often heard is the phrase, ‘“‘Where there is joy, there is Henna.‘” 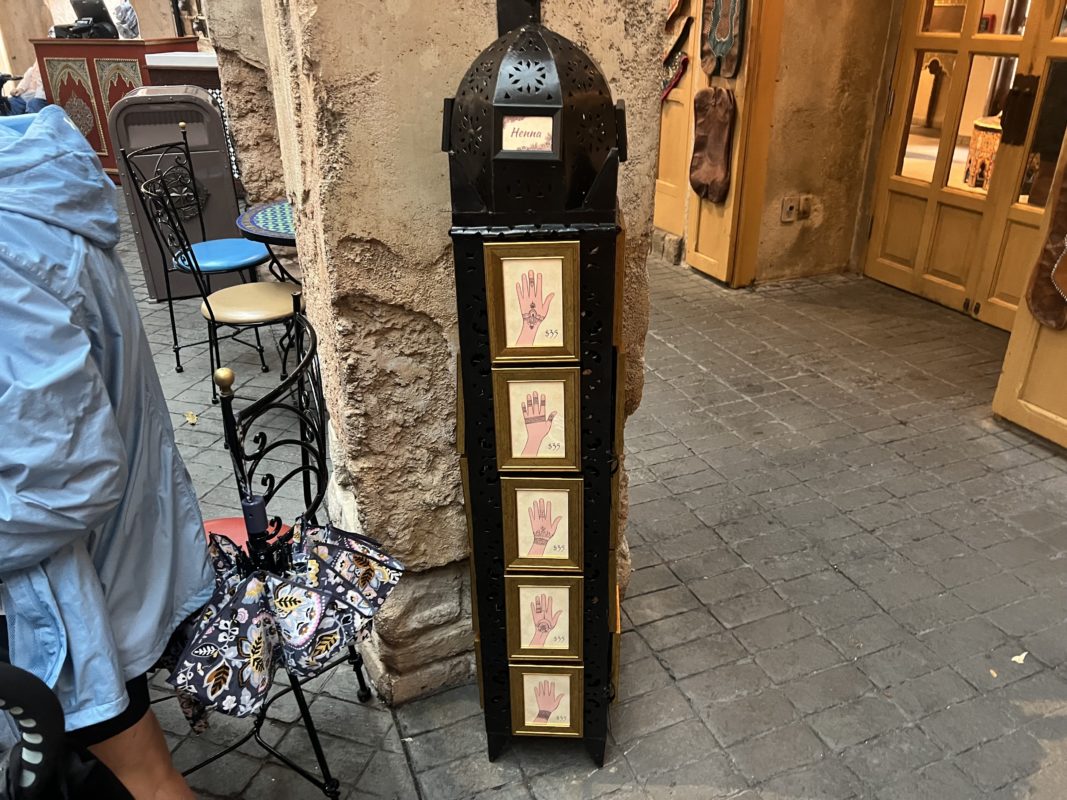 A metal tower displays the Henna designs that you can choose from. 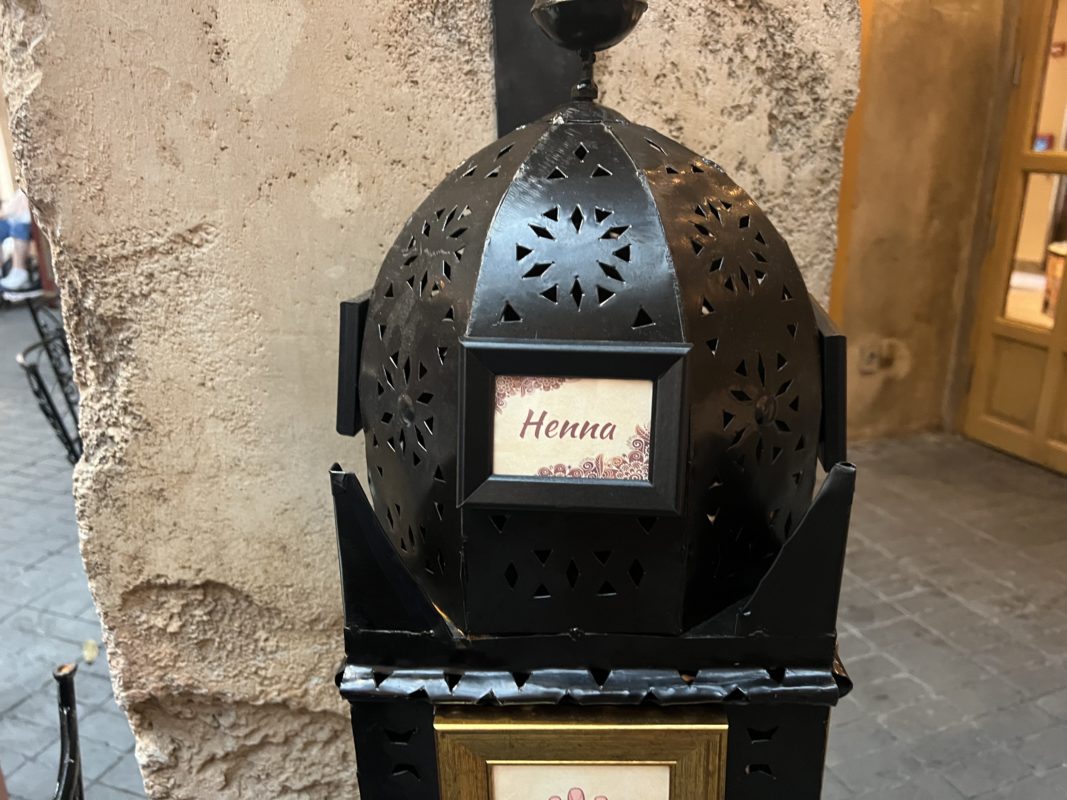 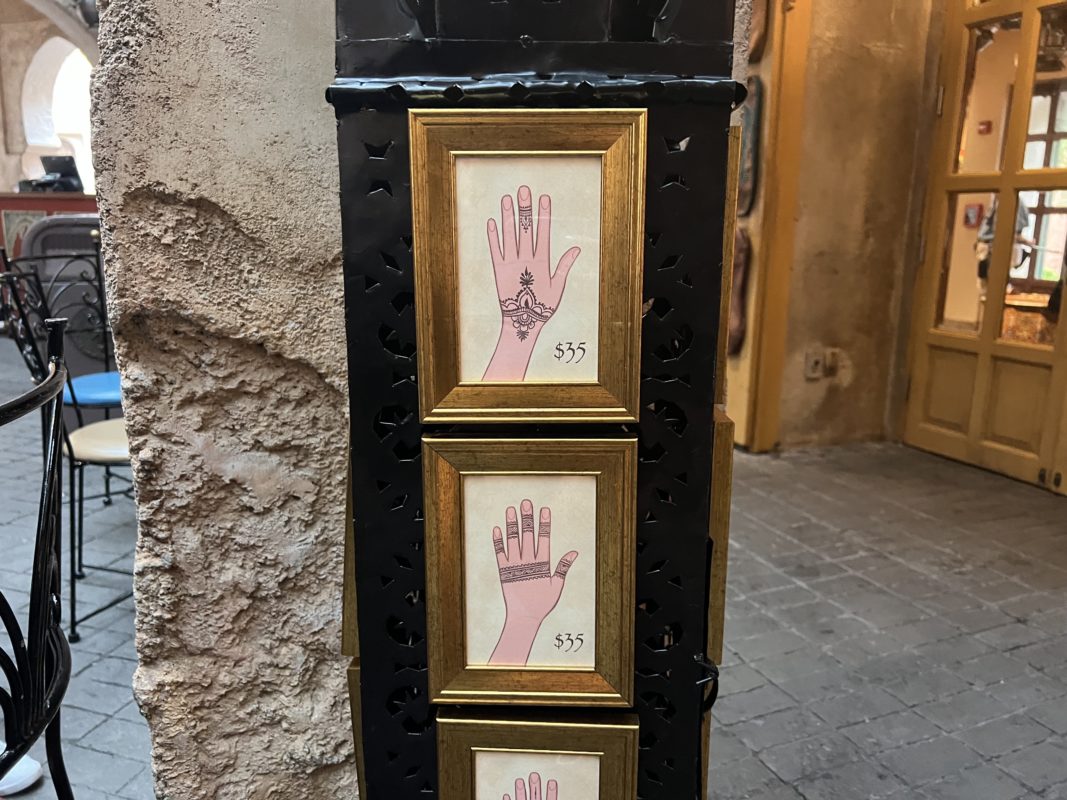 Most designs are $35. The old henna art at the pavilion had prices starting at $15. 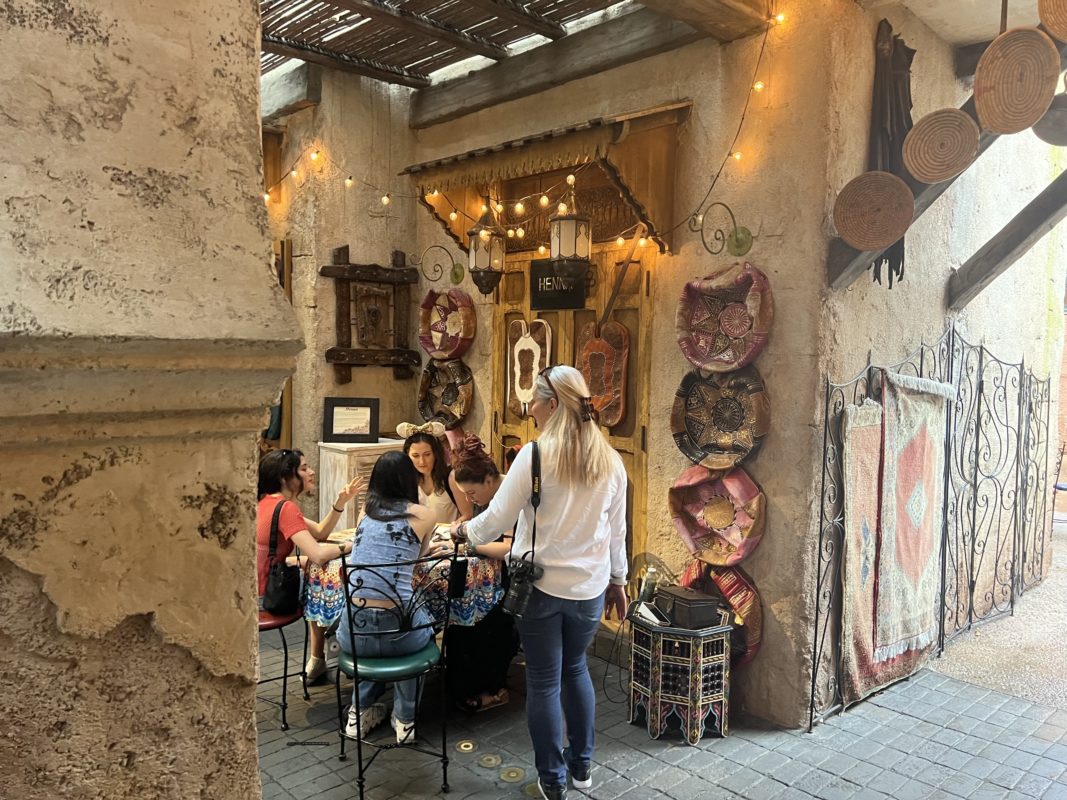 After you choose your Henna design, artists begin transforming your skin into a work of art.

Will you be trying one of the Henna designs on your next trip around World Showcase? Let us know in the comments!

The Art of Henna 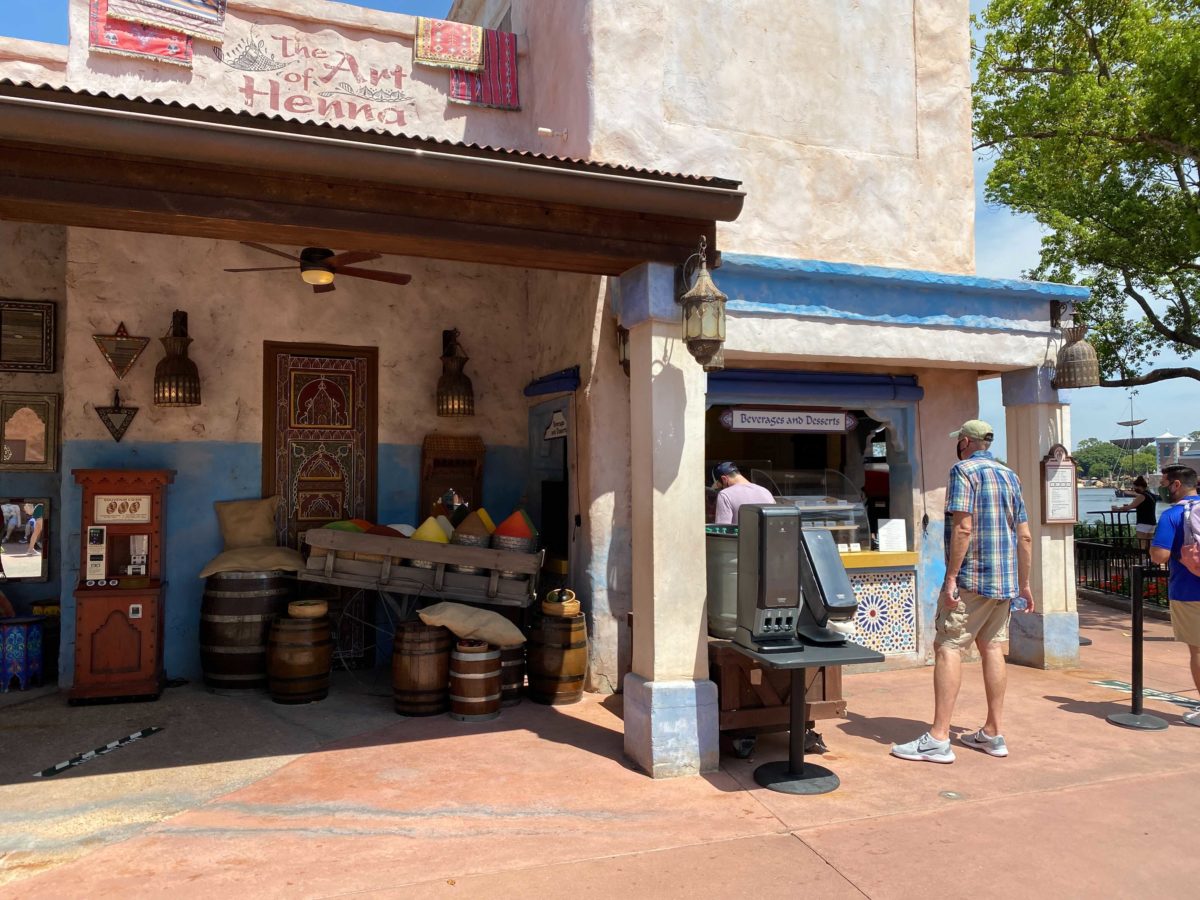 Henna used to be available at The Art of Henna in the Morocco pavilion, but it hasn’t been open since March 2020, when the parks closed due to the COVID-19 pandemic. At the time, the pavilion was primarily operated by a third party — Marrakesh Moroccan Restaurant, LLC, who were responsible for the restaurants and stores. The company filed for a $1-2 million Paycheck Protection Program Loan.

That September, Disney filed a UCC Financing Statement claiming collateral against the Marrakesh Moroccan Restaurant company. Shortly thereafter, management reportedly began emptying offices and most of the long-time chefs at the restaurant were let go with no severance pay, including those that were just a year or two away from retirement.

Disney Takeover of the Morocco Pavilion 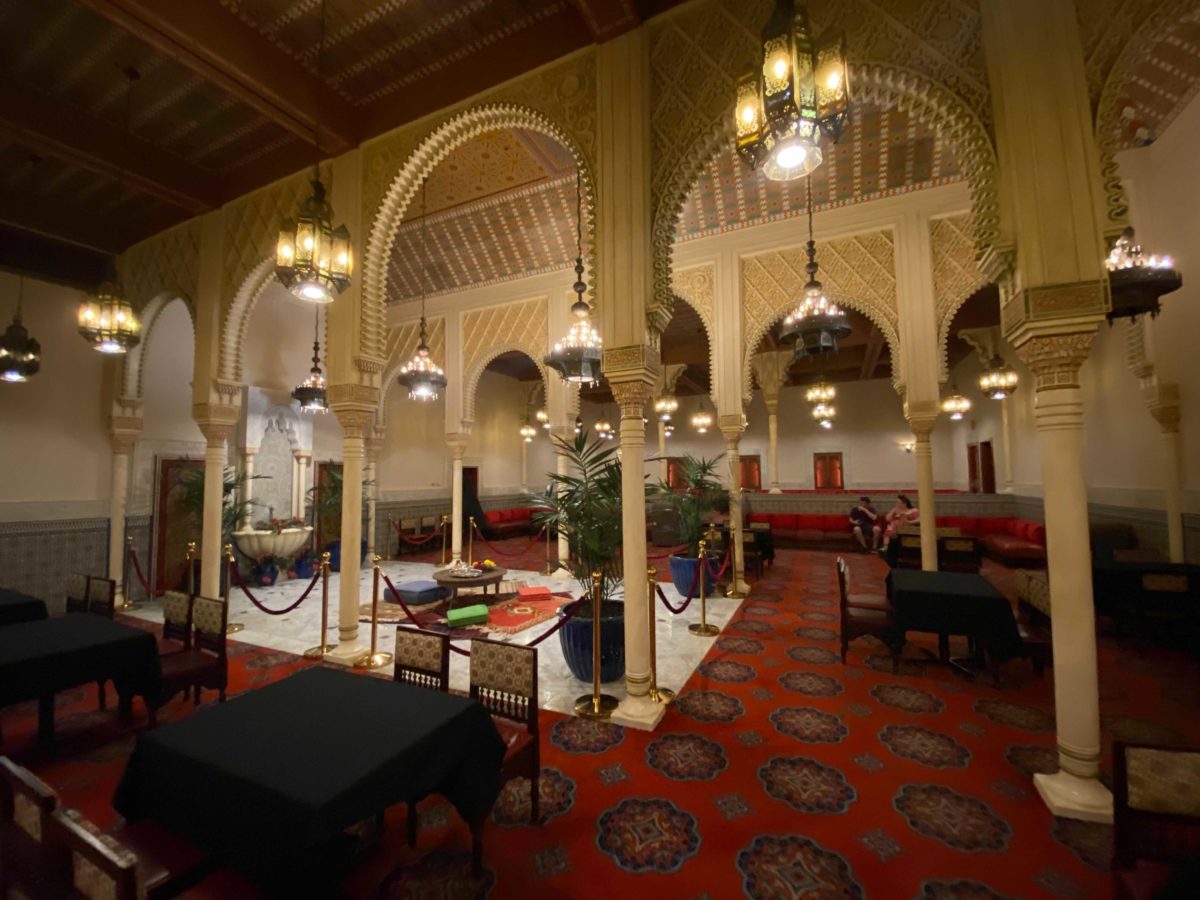 By late October, it was announced that Walt Disney World would be assuming operations of all Morocco Pavilion businesses at EPCOT, including all food & beverage and merchandise locations. The majority of the pavilion closed for refurbishment in December 2020. Since then, operations have been reduced. Tangierine Café is being used as a Festival food location and Restaurant Marrakesh is a seating area.

Many refurbishments have happened since then and changes have been made around the pavilion. The main courtyard and fountain underwent a two-month refurbishment and received new tiling, pavement, lighting, and more. Spice Road Table reopened with a revamped menu. A fan-favorite photo op was replaced, small theming elements were added, and the bathrooms received improvements.

Whether you're an experienced home gardener or plant-averse, gardening at home has plenty of benefits. Anything from avoiding pesticides—which have … END_OF_DOCUMENT_TOKEN_TO_BE_REPLACED

"The Last of Us" begins in the Boston quarantine zone, and has featured plenty of iconic landmarks for Beantown aficionados. For example, the series … END_OF_DOCUMENT_TOKEN_TO_BE_REPLACED