Algae and mosses grow significantly in winter when other plants’ growth slows down or they shed leaves offering less competition for light. Like most plants, mosses and algae use photosynthesis. Neither mosses nor algae have roots to extract water from the soil so they are very susceptible to summer dry periods This also means they do not compete with plants for water. Despite this, they are not much liked by gardeners who are happy to spend freely on moss killers and algae cleansers.

As well as lacking roots, mosses have no water conducting (vascular) system so they cannot grow tall. In place of roots, hair-like rhizoids both anchor the moss and gather moisture and minerals from nearby surfaces. Their dense green clumps are ubiquitous in gardens and wild areas. Not only do they thrive in damp situations, but many survive in places very prone to drought, on trees, roofs and walls. They dehydrate in dry periods but are restored in rainy weather. Mosses spread by wind-borne spores.

Some mosses are associated with cyanobacteria – sometimes called blue-green algae – although they are, scientifically speaking, bacteria. These use pigments to photosynthesise and often, as is the case when they grow with mosses, fix nitrogen from the air. The moss provides shelter and the cyanobacteria supplies the vital plant food, nitrogen. Cyanobacteria are common on soils where they may form visible masses and fix nitrogen, improving soil fertility.

Algae include seaweeds that can grow up to 50m long and also single cell plankton in sea and other water. In gardens, single cell and filamentous (strand-forming) algae turn ponds green and murky. Films of algae form on leaves blocking light to some extent reducing the plant’s photosynthesis. Other algae can make paving slippery, especially in winter.

Lichens can resemble mosses and algae and grow in similar places but are a dual or symbiotic organisms of fungus and algae or cyanobacteria. Gardeners don’t always appreciate lichens and may be needlessly concerned that the lichens harm plants.

Few lawns are entirely moss-free with excess moss leading to weak, unsightly swards that wear poorly and look thin in summer. Moss killers based on the fertiliser Iron sulphate, or bacteria, are effective – but a better option for long term moss management is to help the grass grow thickly, limiting opportunities for mosses.

Raking out moss, raising the mower height, feeding lawns and spiking to allow air into compacted soils boosts lawn growth. Shaded lawns are particularly vulnerable and pruning to remove shade or even replacing lawns with other ground cover are alternative options.

Mosses on shed roofs, fences and walls do little harm and are best left undisturbed.

Mosses are important for wildlife, offering shelter and food for insects and nesting materials for birds. Mosses growing on soil or the surface of container compost cause little harm but may indicate compacted soil or poor drainage. Remedying these will manage the moss. However, moss could be considered a useful groundcover preventing weed seeds germinating. There is a good case for leaving mosses undisturbed. 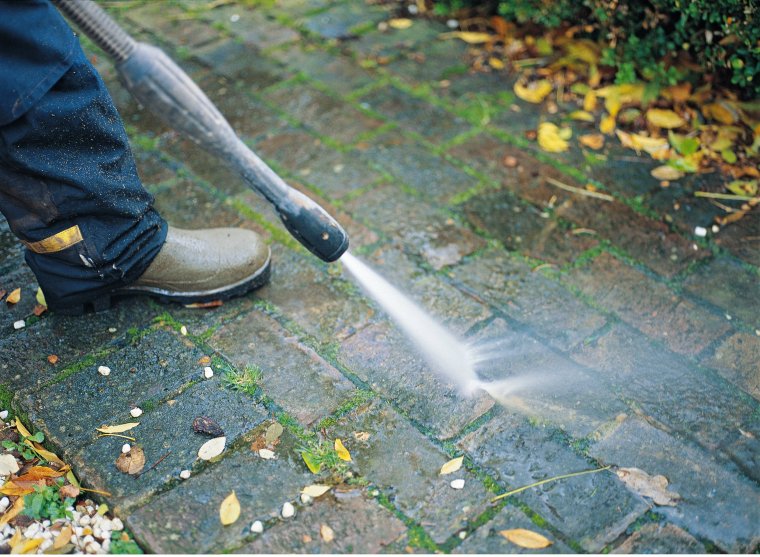 In wetter climates moss gardens are sometimes grown, particularly in Japan where they are very skillfully manicured. Despite the ubiquity of moss in the UK, moss gardens do not seem as easy as might be expected. More feasible is encouraging mosses, algae and lichen to soften masonry or add to garden settings, grottos say. They can be transplanted with care and ample watering. Alternatively, daubing surfaces with weak solutions of yoghurt or seaweed fertiliser encourages natural colonisation.

Where slippery paths covered with moss, algae or lichen occur, temporary relief is possible from energetic application of patio cleaners or by using pressure washers. However, if the prevailing conditions are ill-drained and shady and cannot be remedied, alternative materials such as gravel or wood chips might be a more sensible solution.

Green algal sheens on leaves cannot be easily remedied and are best tolerated – but cleaning greenhouse glazing is well worthwhile before and during winter for the best interior light and, therefore, plant growth.

Pond algae is particularly intractable as conditions are, by definition, wet and in summer light is abundant.

Adding packs of barley straw in early spring solves pond algae in about half of cases. The straw releases hydrogen peroxide as it decays which suppresses algae without causing other harm. Other measures include dyeing water black (and mysterious) or growing more shade-casting floating aquatic plants.

Qatar participated in the 2nd edition of the Municipal Investment Forum (FURAS), which was organized by the Ministry of Municipal, Rural Affairs and … END_OF_DOCUMENT_TOKEN_TO_BE_REPLACED

PLAN C, courtesy of Sundance Institute. When a marked increase in abortion restrictions and bans began unfolding across the country, Francine … END_OF_DOCUMENT_TOKEN_TO_BE_REPLACED

Tracy Goodwin stands in front of the Altgeld Gardens Memorial Wall. Rich Cahan A hundred and thirty blocks south of the Chicago Loop, there’s a … END_OF_DOCUMENT_TOKEN_TO_BE_REPLACED