At Form + Content Gallery, you notice what’s missing from the fabric draped from the ceiling and hung on the walls just as much as the material itself. The long pieces of silk, which artist Moira Bateman has left to steep in bogs, are thick with sediment and mud. They hold a sense of decay, with the bog water eating away at the fabric. There’s also a sense of absence, with its cut out shapes that bear resemblance to bogs themselves.

Bateman’s background is in landscape architecture. After her college studies, she worked in the landscape design field for a time, with a focus on native landscape reclamation projects and wildlife refuge areas, but she quickly moved toward studio art, and eventually, work with textiles.

One of her first projects was a collaboration with writer Patricia Eakins for her story “The Hungry Girls.” Bateman created an installation for a play based on the story, making 10-foot dresses by felting raw sheep fleeces into linen. “I loved working with textiles so much that that’s kind of what stuck out for me,” she recalls. “My goal after that was to kind of go back to my original focus, which was landscape, and that’s when I started weaving fabric in different waterways, for periods of time to make marks on it.”

Bateman has a cabin in northern Minnesota, near a vast bog called Sax-Zim, where arctic birds like snowy owls stay in the winter. She became interested in using the bog water to dye fabric, and got the chance when she was named a 2022 McKnight Fiber Art Fellow.

Through the fellowship, Bateman received funds to study at Botanical Colors in Seattle, where she took a mud dye class with Aboubakar Fofana, a master of creating Bògòlanfini cloths. “It helped me solidify what I’m doing, basically,” Bateman says. For her bog pieces, Bateman uses a technique similar to the Mali mud dye technique which uses the iron-rich bog mud as a dye.

Later this month, Bateman’s work will be shown at the Textile Center for the McKnight Fiber Artist Fellowship Exhibition, where she’ll be showing with fellow Blair Treuer. That exhibition, called “Etudes: Watersheds, Bogs, Kayaks,” will have a kayak Bateman has made of waxed silk, as well as similar work to the Form + Content show.

Later this month, Bateman’s work will be shown at the Textile Center for the McKnight Fiber Artist Fellowship Exhibition, where she’ll be showing with fellow Blair Treuer.

The material is preserved by applying wax, after cutting the fabric into shapes. The result has the effect of dyed fabric, with a textured, earthy feel. The assemblages are sculptural and evocative of the watersheds, offering a record of sorts of our natural world and the impact humans have on water.

“I’m hoping to tell the story to help people love these places, especially bogs because they are very important for climate,” Bateman says. “They hold more carbon than even forests do. I’m hoping to help raise awareness about bogs and help protect bogs.” 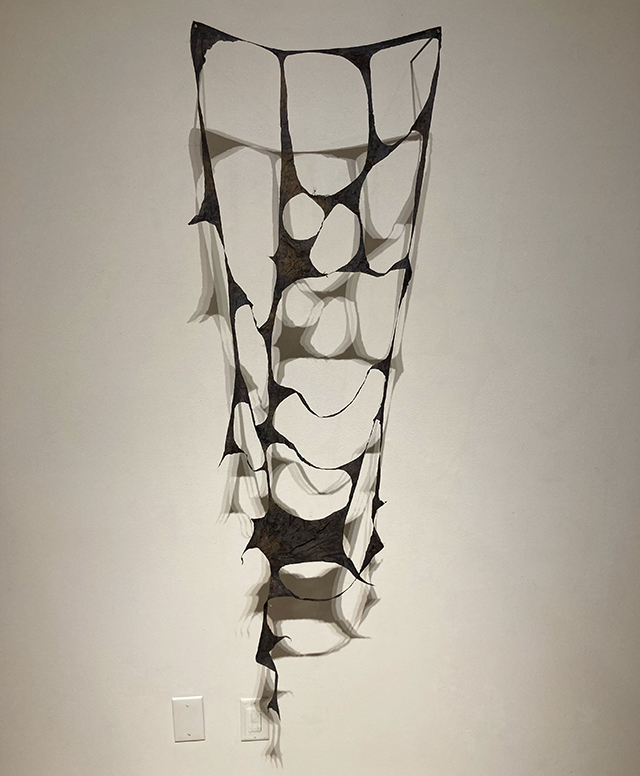 The material is preserved by applying wax, after cutting the fabric into shapes.

She also explores the contrast between strength and fragility, through the deterioration of the material as well as the holes she cuts out in the cloth. For Bateman, these elements represent the disruption of landscape.

MinnPost’s in-depth, independent news is free for all to access — no paywall or subscriptions. Will you help us keep it this way by supporting our nonprofit newsroom with a tax-deductible donation today?

PALM BEACH GARDENS — Basketball season is no stranger to the Cinderella storyline, and this winter, the hardwood has set the scene for the tale of … END_OF_DOCUMENT_TOKEN_TO_BE_REPLACED

Duke made 55.7% of its shots from the field and recorded 24 assists, which were season highs both allowed by the Jackets and also attained by Duke. … END_OF_DOCUMENT_TOKEN_TO_BE_REPLACED

VISUAL artist Kate Wise has set herself a new year’s resolution to be in her Ballarat gallery every weekday and to paint on site. The Haddon creative … END_OF_DOCUMENT_TOKEN_TO_BE_REPLACED