A family of sea otters emerges from the ocean and rambles up the rocky shoreline, while a great blue heron in search of a meal pokes at a wall of rocks.

Fountains of water squirt upwards from clams that have buried themselves across the beach.

He reflects on how the long row of rocks piled along the shoreline represents both past and modern-day West Coast Indigenous culture.

“I’m like, ‘My ancestors touched this, were part of building this’. It’s something more special than a pile of rocks to hold clams,” said Thomas, the fisheries, wildlife and natural resources director for the Penelakut Tribe on southern Vancouver Island.

For years, academics wondered about the origins of the long string of rocks piled along the tide line. The answer came when they spoke to local First Nations, who said the rocks were sea gardens created by their ancestors as cultivation sites thousands of years ago.

Indigenous peoples used the tides to trap clams, mussels, kelp and fish in the shallows once the water receded.

Now, Indigenous leaders hope to gain approval for clam harvesting at the sea garden site on Salt Spring Island’s coast, and another at nearby Russell Island in Gulf Islands National Park, both of which are undergoing restoration. They are thousands of years old. 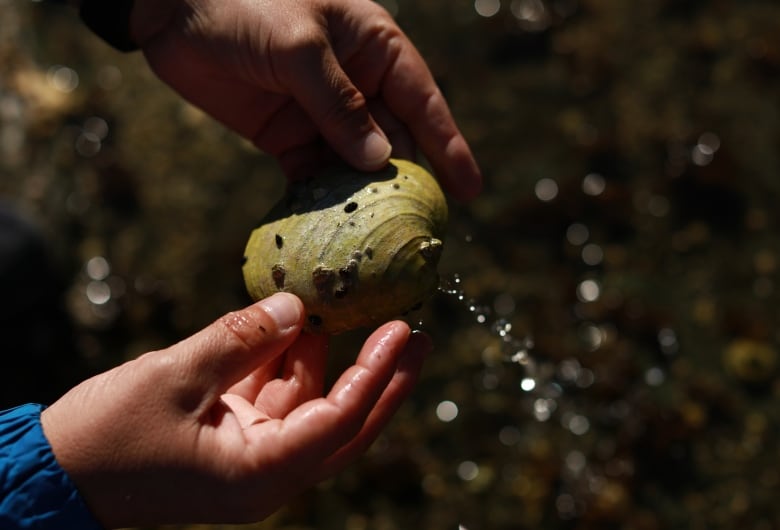 B.C. Green Party MLA for Saanich North and the Gulf Islands Adam Olsen holds a clam shell as he walks along the clam bed restoration. Olsen says the historical suppression of the clam beds was an example of environmental racism. (Chad Hipolito/The Canadian Press)

Thomas said on a recent trip to the sites that all participants want to ensure the clams and other food from the gardens are safe to harvest, which involves testing by the Department of Fisheries and Oceans, the Canadian Food Inspection Agency and Environment and Climate Change Canada.

He said he’s optimistic harvesting approval could come within one year, although others suggest it could be three or four years. 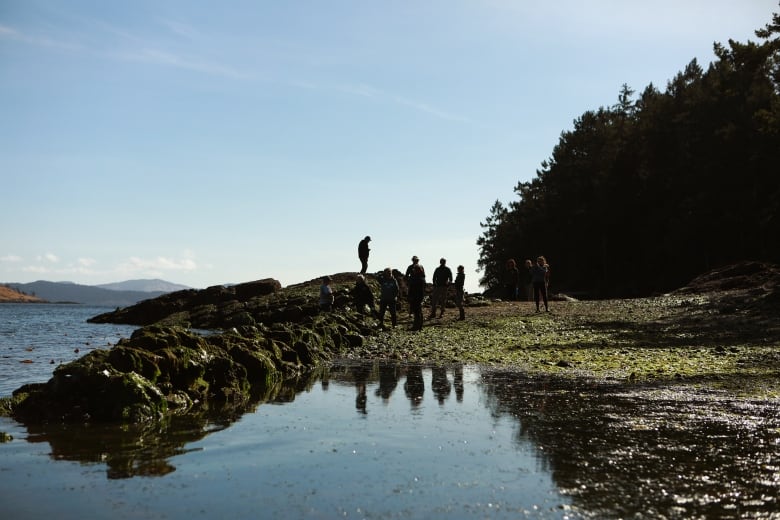 A group from Parks Canada and First Nations along with others tour the clam bed restoration project underway while on the Salish sea garden tour. (Chad Hipolito/The Canadian Press)

Indigenous nations, Parks Canada, scientists and academics are jointly participating in the restoration of the sea gardens, located along ancestral territories of Coast Salish First Nations who travelled the Gulf Islands tp trade and gather food.

The COVID-19 pandemic halted efforts to restore the sea gardens, but the rebuilding work is resuming, Thomas said. 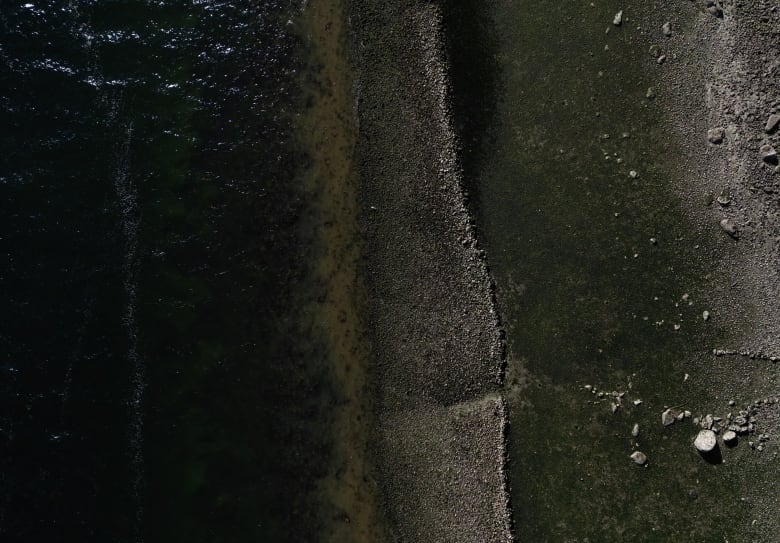 The Fulford Harbour sea garden clam bed was built by First Nations in the area that date back nearly 4,000 years. However, it’s not part of the national park network but in the Salish sea near Salt Spring Island. (Chad Hipolito/The Canadian Press)

“When the tide comes in and out, it’s got the seeds floating around in the current, and if you’ve got a wall there, the seed will get stuck behind the wall when the tide goes out and settle into the beach,” said Thomas.

“These gardens have been here for generations and generations, pre-contact.”

Elizabeth May, the MP for Saanich-Gulf Islands and former Green Party leader, said the presence of the rock walls on B.C. beaches had confounded scientists for years.

“We are, as settler-culture Canadians, blind to what’s right in front of us,” she said. “A wall along the side of an island, and to know that for quite a long time our expert geologists we’re baffled by these walls. Where did they come from? How were they formed?

“How about the obvious thing: Indigenous people moved the rocks to create a place to ensure food supplies of multiple species.” 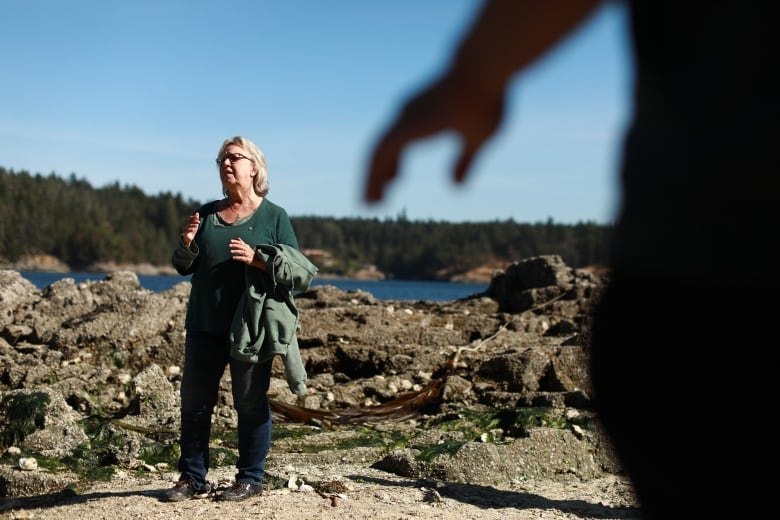 Green Party MP Elizabeth May said the existence of the gardens was baffling for many years for settler scientists. (Chad Hipolito/The Canadian Press)

The work to restore the sea gardens involves aeration, debris removal and some harvesting and marks them as much more than heritage zones, said Nicole Norris, a First Nations partnerships co-ordinator who works for the Solicitor General’s Ministry.

“We’re not just here removing and filtering rocks through a wall,” she said. “We’re creating a sustainable food source in the same way that our old ones did.”

Adam Olsen, Green Party MLA for Saanich North and the Islands, said sea gardens were managed for thousands of years until colonial settlers banned Indigenous peoples from the beaches. 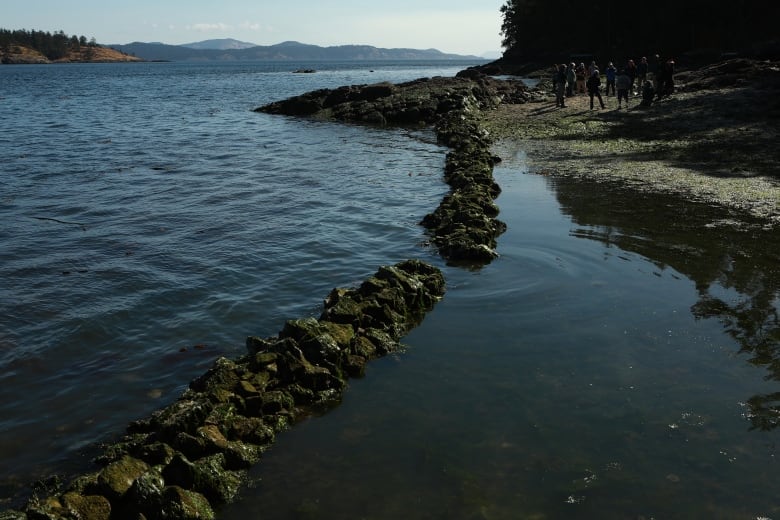 Indigenous peoples used the tides to trap clams, mussels, kelp and fish in the shallows once the water receded in sea gardens. (Chad Hipolito/The Canadian Press)

“This is an example of environmental racism,” said Olsen, who’s a member of the Victoria-area Tsartlip First Nation. “These policies are used to deliberately disconnect Indigenous people from their lands.”

The work to jointly restore the sea gardens is “inspirational,” considering past government policies of prohibiting access and disregarding Indigenous knowledge, according to Erich Kelch, the sea garden project’s restoration manager for Parks Canada.

“It’s foundational how government and First Nations can be working together in a positive way on the land that’s taking care of it for future generations,” he said. 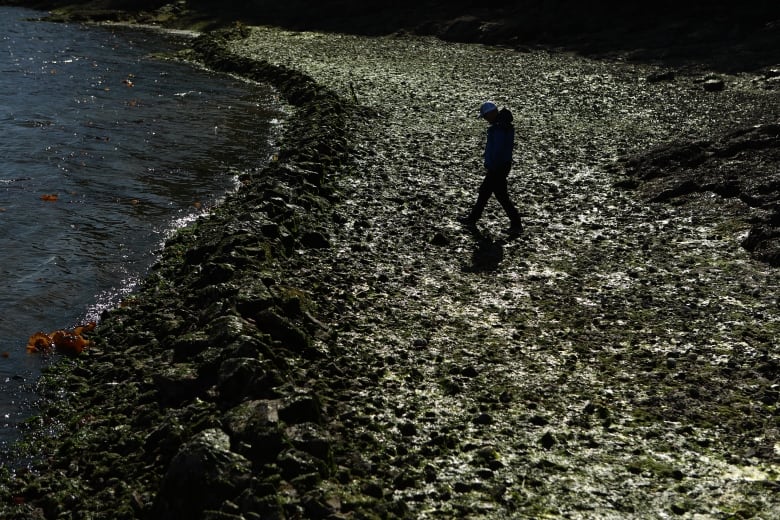 For the longest time, the government disregarded and even disbelieved the traditional Indigenous practices of managing the land, he said.

“This is trying to change that, recover that and restore that and build a better future,” Kelch said.

Thomas said he once considered moving rocks as a form of exercise, but when he’s at the sea gardens it becomes a matter of cultural rebuilding.

Many longtime gardeners will tell you that the garden is their happy place. New research suggests that many people may indeed reap mental health … END_OF_DOCUMENT_TOKEN_TO_BE_REPLACED

Many goldenrod varieites are tall, but Golden Fleece is a small-statured variety. It produces tiny, bright yellow flowers in clusters on arching … END_OF_DOCUMENT_TOKEN_TO_BE_REPLACED