E..scapes – the title chosen for the collective exhibition by Wallace Falzon, Patrick Galea and Lawrence Pavia – is a play on words, thus offering different perspectives that the viewer is invited to investigate.

The ‘E’ in the title could refer to ‘electronic’, maybe a nod to the internet jargon that shortens the word into a succinct counterpart, indicating an ‘e’xhibition of scapes. Not necessarily just landscapes but also ‘personscapes’, as encountered in Falzon’s sculptures. Though the introduction of punctuation marks in the title could direct the viewer towards a ‘technological’ interpretation, one could see this collection as ‘escapes’ from the discomfort of the mundane, escapist narratives expressed through artistic expression.

Falzon’s art is a quest for personal equilibrium. Sculpture allows him to give volume to imaginary and real-life characters whom he categorises as stereotypes that belong to different social strata.

There is a focus on the particular individual in the ‘Giacomettian’ humanoid figure. Unlike the Swiss sculptor, Falzon’s art is more focused on redemption and hope. 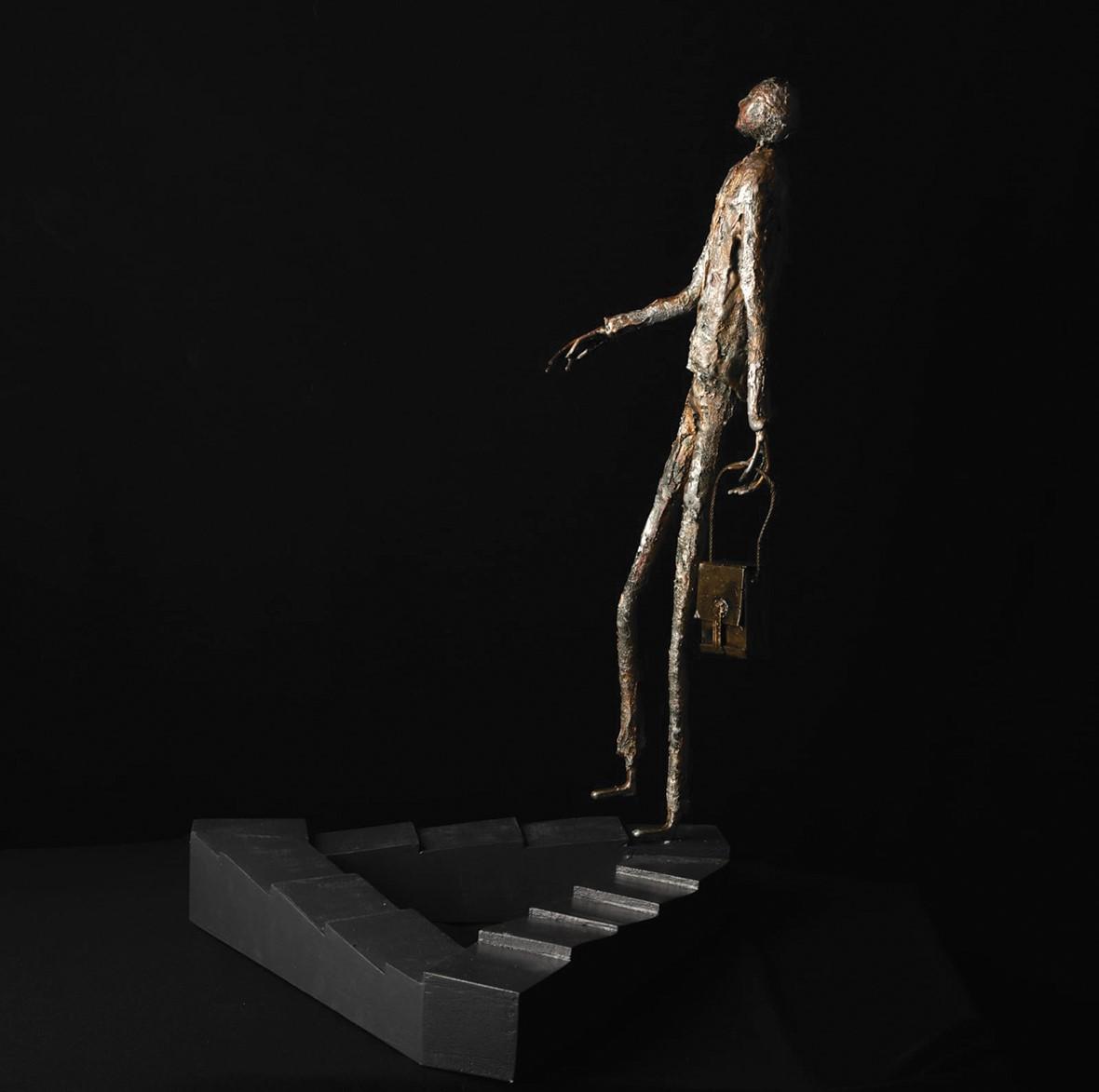 ‘Climbing Up?’ by Wallace Falzon

He employs a detached perspective and informed hindsight as he explores all that life threw at him and how he matured into a strong artistic voice, by using these episodes, autobiographical and not, and embellishing them with satire and humanity.

An element of recycling is often present in Falzon’s oeuvre, especially his sculptures. The exercise is much more labour-intensive but more satisfying for the artist, in the sense that the actual artistic process does not take up more resources, that material was upcycled into a new narrative – the transformation of base material that is ready to be thrown away into an artistic statement. 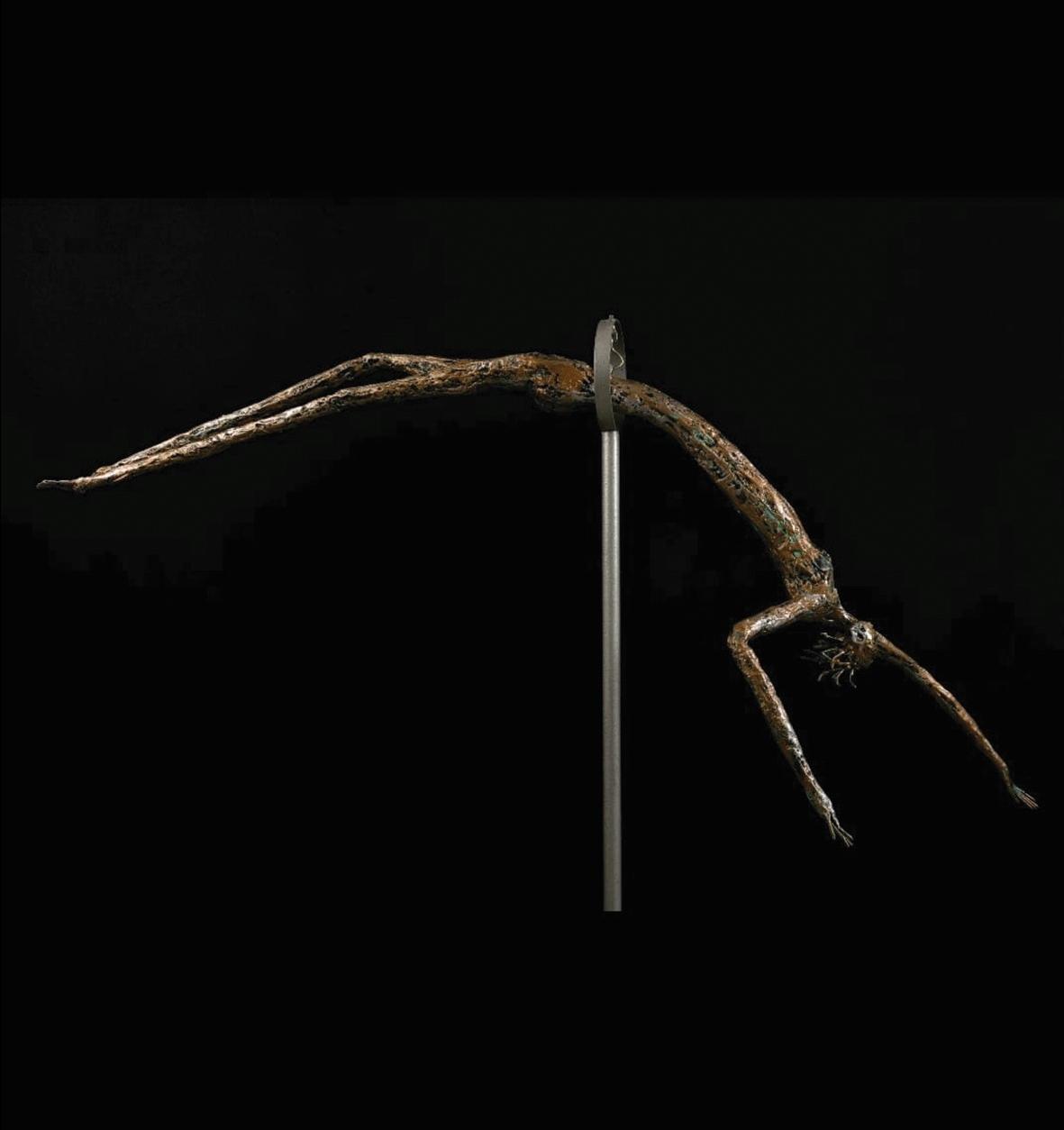 ‘The Dive’ by Wallace Falzon

Falzon’s ‘personscape’ Climbing Up? proposes an Escher-esque conundrum on the meaning of direction and orientation, real and metaphorical, while The Dive evokes the biblical eye-of-the-needle episode, which might be read as a comment that the contemporary consumerist society doesn’t produce too many leaders deserving of eternal salvation.

It is only the very special few who are redeemed and who don’t fail such a test. The Dive could symbolise a headlong liberating jump into unchartered territory of honesty, unencumbered by the gravitational force of peer pressure, the necessity to get rich at all costs, and the glorifying of fake role models. 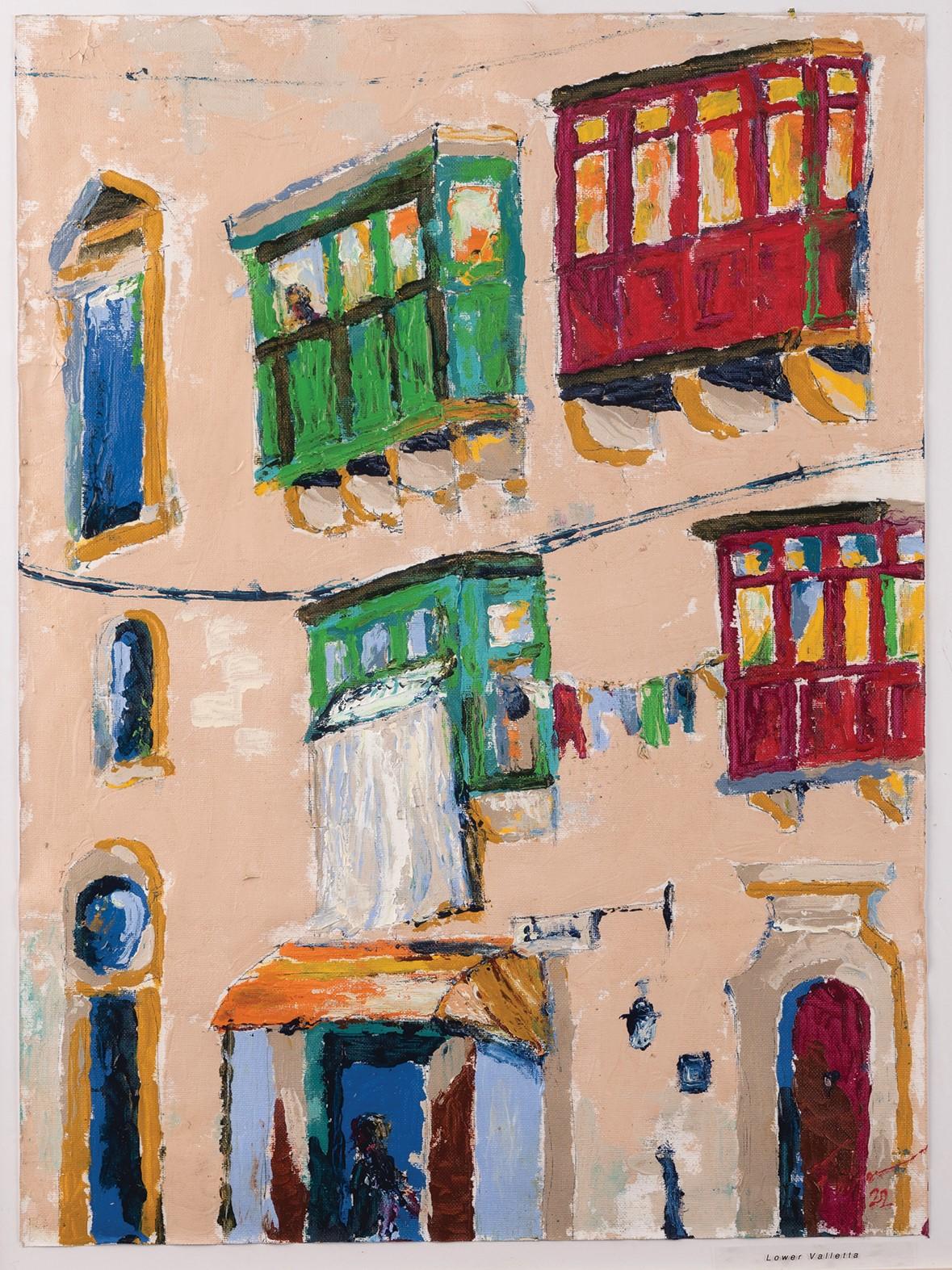 Besides his typical sculptural ‘personscapes’, Falzon is also exhibiting a series of Maltese landscapes and townscapes in which he is using a more fluid impressionist approach, poetically capturing the fleeting image.  This is a change from his usual direct, expressionist style.

Galea’s playfulness, just as much as the vibrancy of the colours of his paintings, defines Galea and his attitude to life as a man as well as an artist. He is a man of sunny disposition who wouldn’t be able to live without colour.

E..scapes is a play on words, thus offering different perspectives that the viewer is invited to investigate

His days as a 1970s student of architecture and design at Jacob Kramer College in Leeds exposed him to different perspectives. The tutorship of British artist and educator Frank Lisle markedly contributed to the young Galea’s perception of form, volume, light and colour. 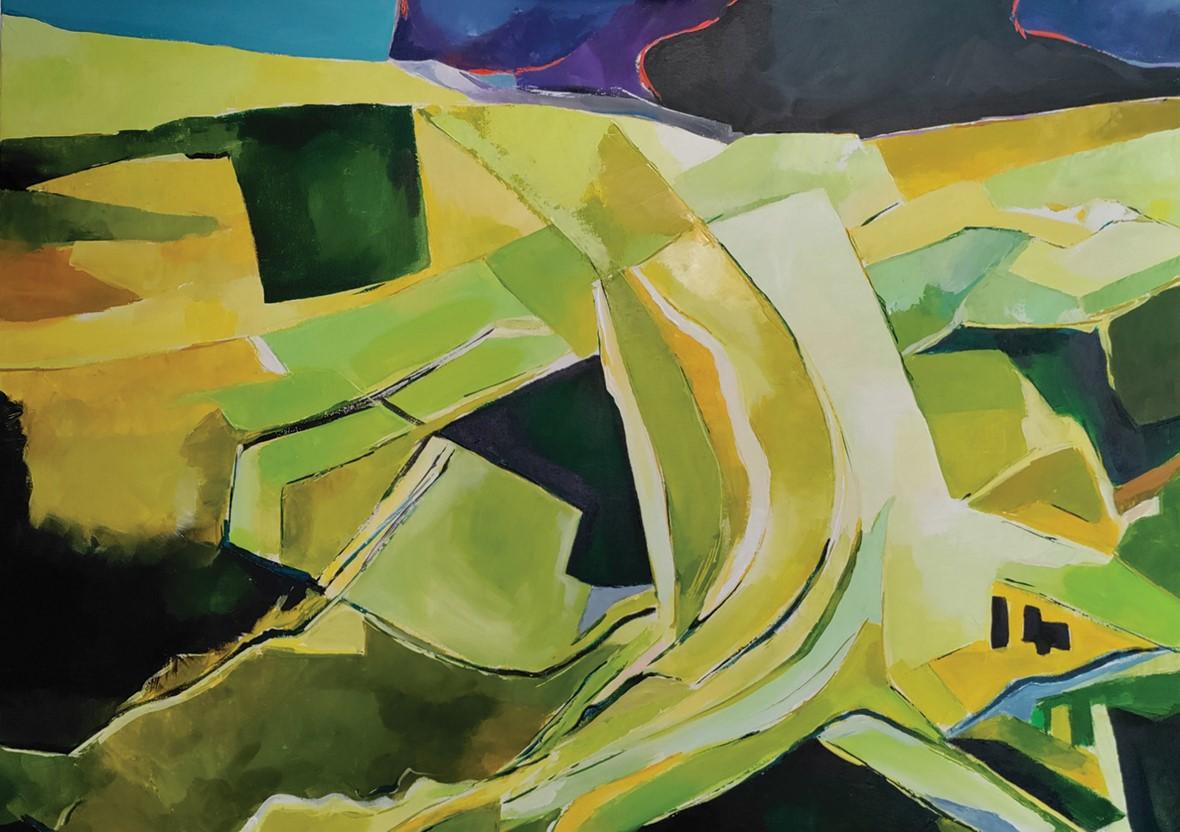 Famous British artist David Hockney was a former student of Lisle when the latter was the head of the art department at the Bradford College of Art. One can safely surmise that having Lisle as a common denominator explains the Maltese artist’s admiration for Hockney’s work and his development as a landscape artist.

There is an innate search for architectural elements even in a landscape in which human intervention is slight. Galea’s landscapes are an escape from the clutches of contemporary Maltese reality and the incipient ugliness that is the result of the systematic and uncontrolled destruction of Malta’s urban fabric. 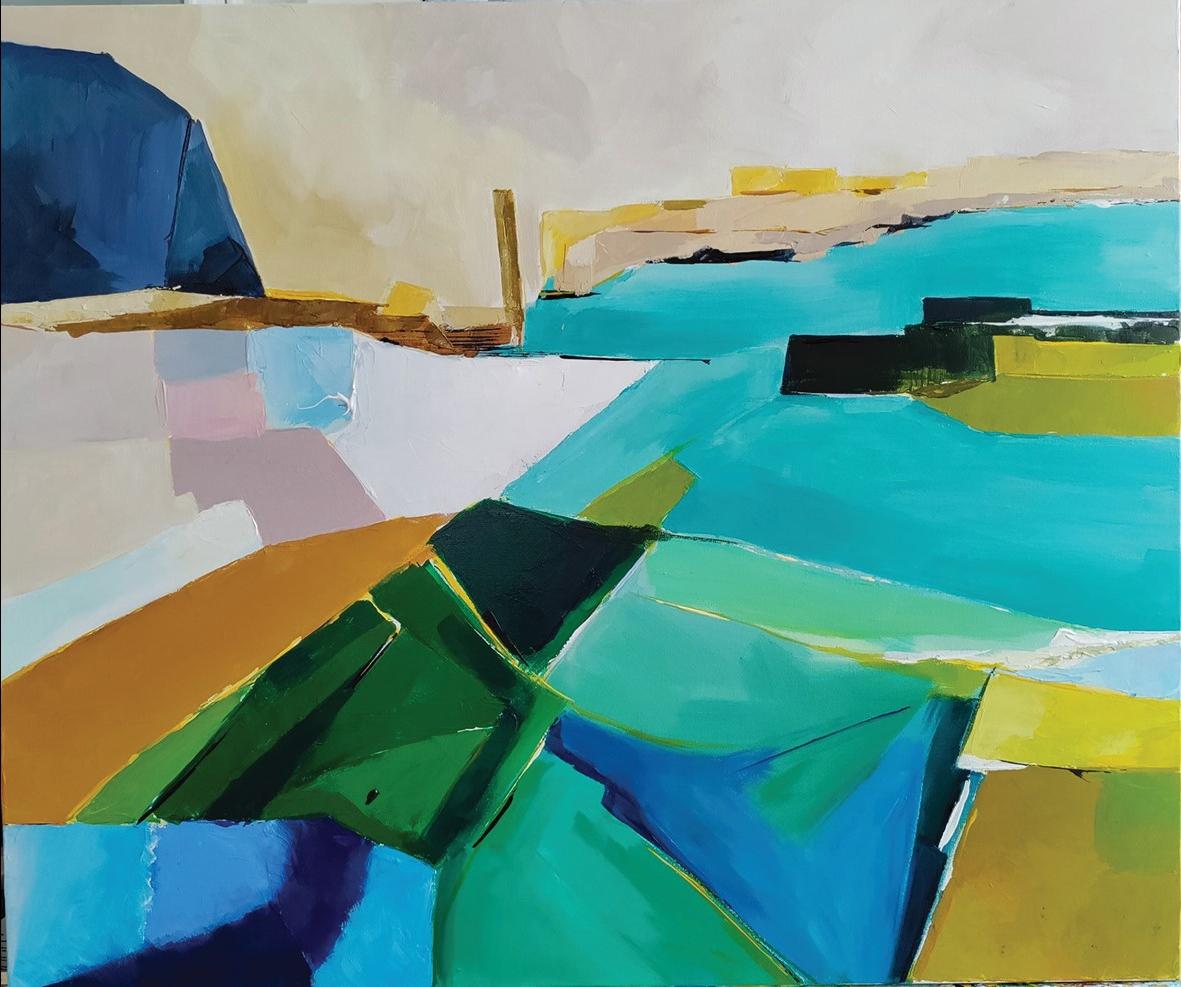 ‘Abstract 2 – Of Light and Sand’ by Patrick Galea

In his recent work, the artist has introduced a compositional fluidity that takes him away from the teachings of Lisle and, up to a certain point, from the hard edge that used to be one of the defining characteristics of his landscapes. Chromatically, the paintings in the E..scapes still scream Galea.

It’s just that the rigidity and the disciplined composition have mellowed into a frictionless integration of elements, even though the hard-edge component persists. From a prevalent Hockney-esque outlook that characterised his previous oeuvre, the artist is searching beyond these constraints by looking into the territory of Richard Diebenkorn and the less structured and freer one of Ivon Hitchens. 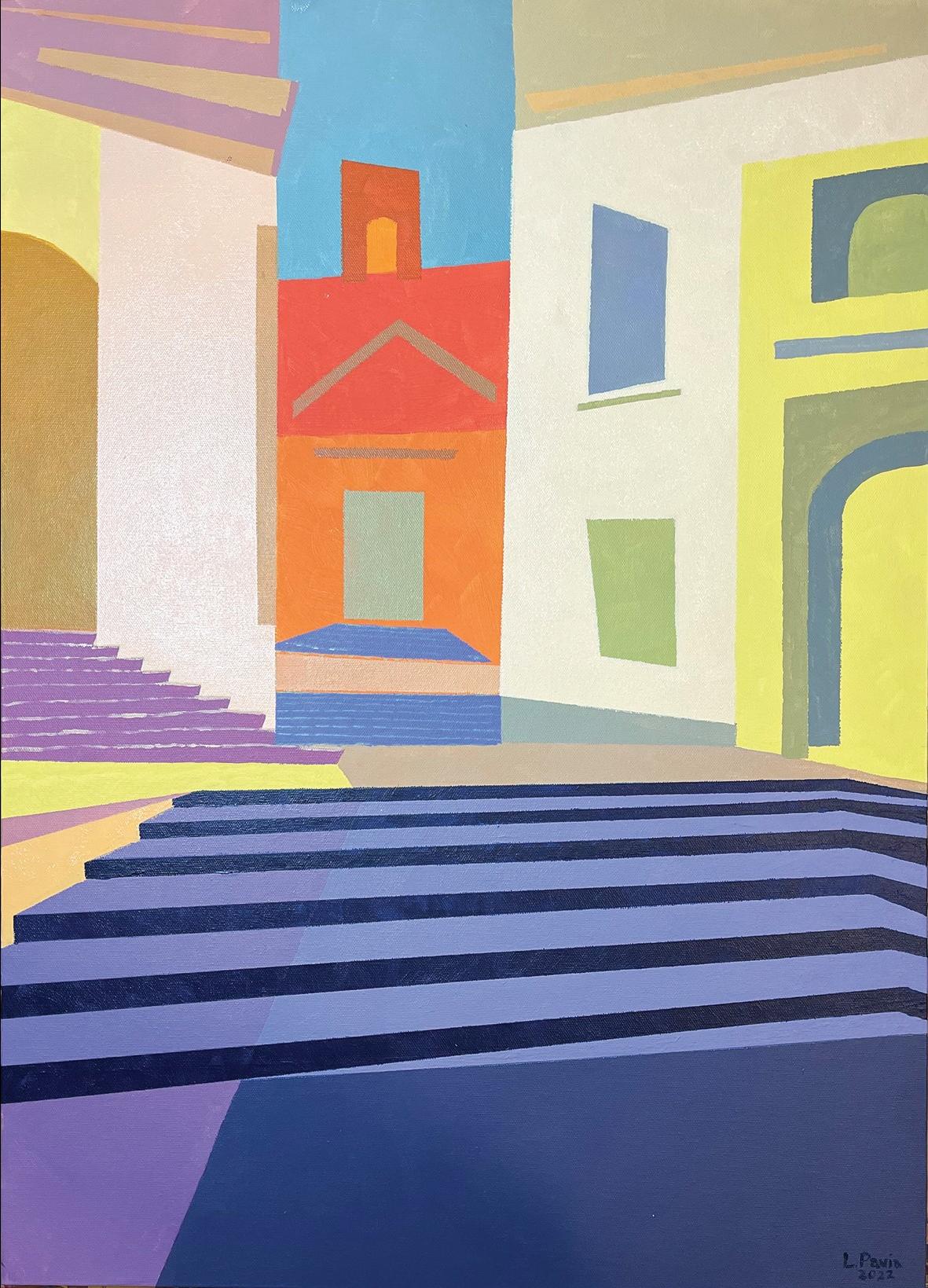 Pavia’s paintings are striking for the way the artist portrays the geometry that is created when the strong Mediterranean sun hits our islands’ vernacular architecture. Limestone, the honey-coloured building block of most of Malta’s built fabric, reflects light starkly and a rhythm in the play of shadow and light is often created; the features of the architecture themselves, such as doorways and arches, often act like an optic semi-permeable membrane. 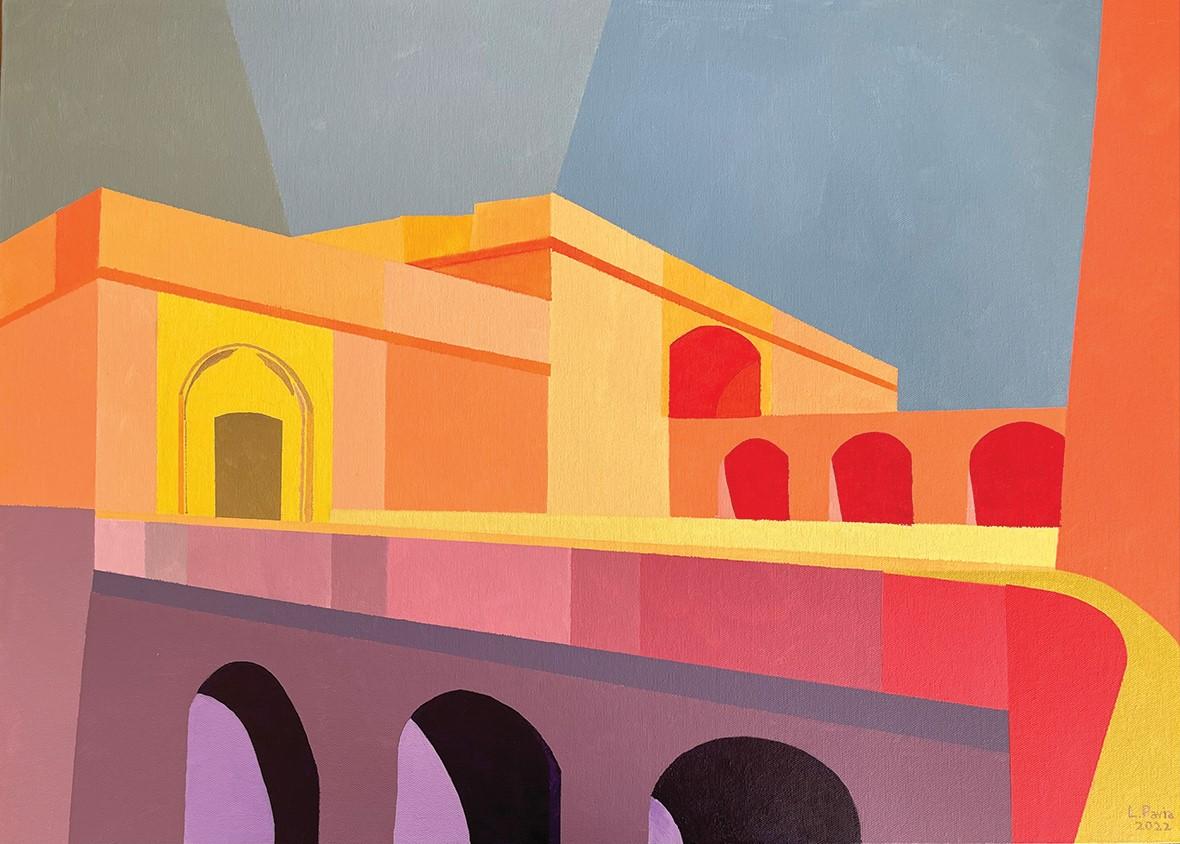 Pavia makes use of the hard-edge technique that used to be very dear to Harry Alden. This adds to the stark harshness of the incident light, evoking Hockney’s California-themed work. Stairways are portrayed with an Op-Art sensitivity of recurrent elements.

He makes use of bold, flat but vibrant colours that are delineated and resolute, and allow for no seepage into tones and gradations. Pavia’s work elicits comparisons with the work of British pop artist Patrick Caulfield as well as with that of Alex Katz and Julian Opie for the particular treatment of subject matter. 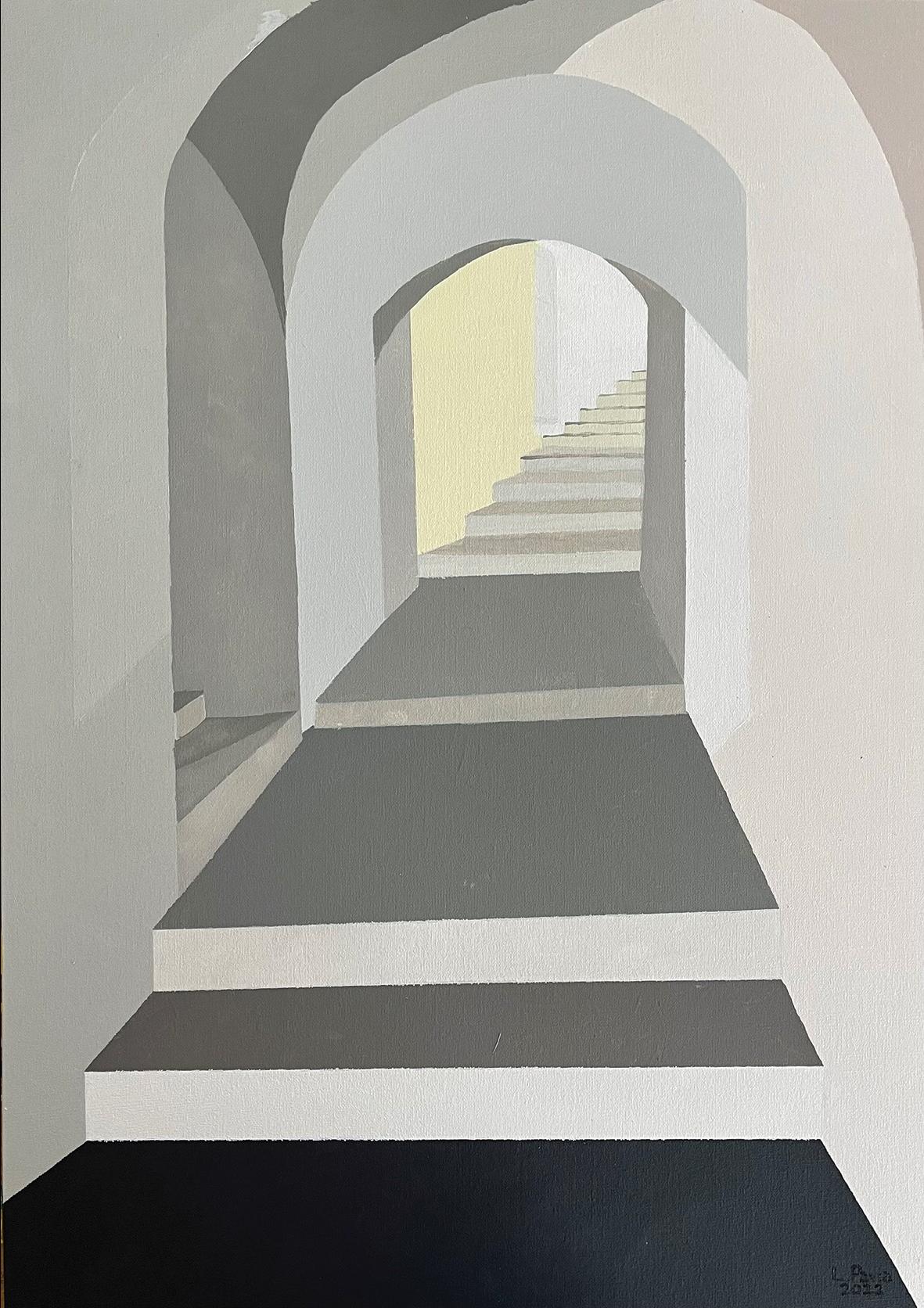 One is struck by the silence in these works that strikes at a deep metaphysical level similar to the one that one encounters in Giorgio de Chirico’s arcaded Turin piazzas. Some of Pavia’s streetscapes evoke the same bleakness through the absence of humanity. Everything, even corridors and archways, seems to be purged by the glaring light. The existential darkness of the human condition has been banished from these pristine environments.

E..scapes, hosted by Obelisk Gallery, 234, Main Street, Balzan, is on until November 15. Opening hours are Monday to Friday from 4 to 7pm and Saturday from 10am to 2pm.

Independent journalism costs money. Support Times of Malta for the price of a coffee.

Funding is currently available through the state of California for small landscaping businesses to purchase new zero-emission landscaping equipment. … END_OF_DOCUMENT_TOKEN_TO_BE_REPLACED

When Michelle Provaznik was younger, working a job in gardens, or even the realm of gardening, wasn’t really on her mind. It wasn’t something she’d … END_OF_DOCUMENT_TOKEN_TO_BE_REPLACED

Friday, 16 December 2022, 5.00pmPavilion Theatre is currently looking for playwrights, makers in theatre and artists to apply for use of Pavilion … END_OF_DOCUMENT_TOKEN_TO_BE_REPLACED

Thousands of trees are being planted at a huge new logistics park taking shape off the A14 at Stowmarket. Gateway 14 Business, Innovation and … END_OF_DOCUMENT_TOKEN_TO_BE_REPLACED