Glen Murray brushed away tears as he pledged to work with the province to improve access to detox programs, treatment options and paramedic services for Winnipeggers who use drugs.

“We need to take this more seriously,” said Murray, whose son died three years ago as a result of addiction.

While restoring and scaling up outreach programs and community health centres is largely the province’s responsibility, Murray said, he would be “unrelenting until we have an agreement in place” with the provincial government.

“I’m promising to create a political situation in the city by getting massive public support, by holding public meetings,” he said.

A city led by Murray would contribute more money to neighbourhood-based support and outreach programs, and paramedic services.

“(In) a community health-based model, if you restored and rebuilt outreach programs, you would reduce the amount of demand for the back-end loaded emergency programs, it’s very clear. If we fail to do that, the cost of the system over the next few years will be much higher than they are right now.”

Murray promised to released a detailed and transparent budget plan if elected Oct. 26.

Greg Kyllo, executive director of Bruce Oake Recovery Centre, was in attendance to support Murray’s campaign. The 50-bed residential recovery centre has had 101 people complete its program to date, but he said the need largely outweighs what’s available in Winnipeg.

“Having that leadership at the city level is exactly what’s needed to help co-ordinate us and to integrate and link to all three levels of government,” he said.

Adding recovery centres, at a cost of $15 million per building, would be offset by savings incurred by keeping people sober, lowering the levels of hospitalization and police intervention, Murray said.

“Everyone I’ve talked to has said that we need the money, but it’s really shifting money from a broken system and from an expensive system,” he said.

Murray said he would consider working to bring a safe injection site to the city.

That includes expanding library hours, making transit free for anyone under 17 and dance programs for low-income families. He would move to have community centres registered as charities so the city can issue tax receipts for donations.

Ouellette said he’d work to build two aquatic centres — at a cost of up to $25 million each. One would be built in the inner-city to ensure equitable access.

“If Steinbach and Portage la Prairie can have an indoor aquatic centre, I think Winnipeg could aspire, as our provincial capital, to a little bit more for our children, especially since we are a winter state and we do spend a lot of time indoors,” he said Friday. 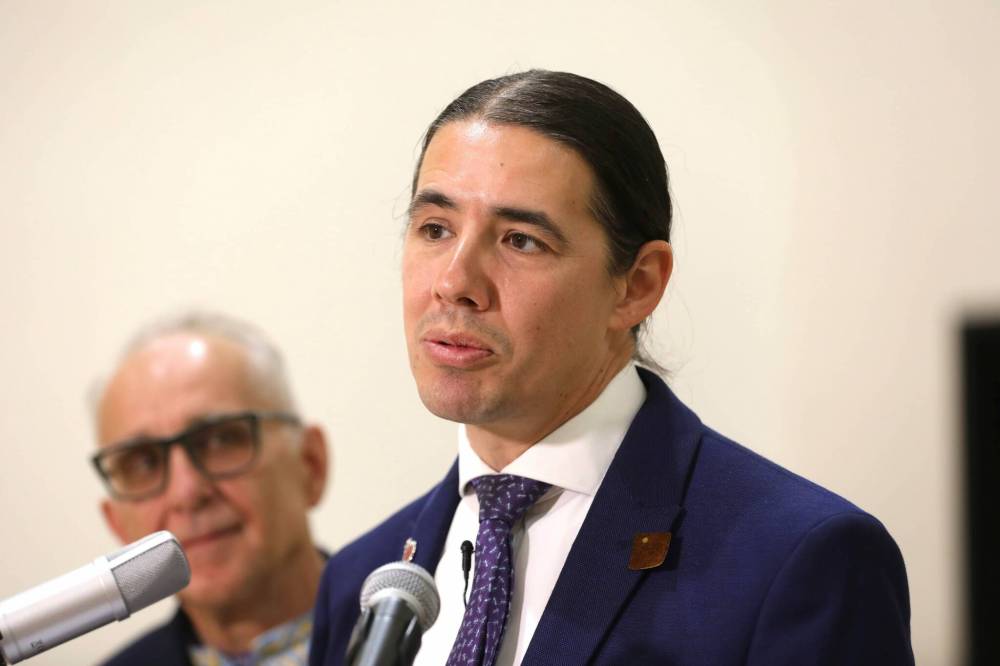 Ouellette, who was joined by his 10-year-old daughter Abigaëlle, used the announcement to collect signatures from attendees at the West Broadway Neighbourhood Centre. He said he had submitted the required 250 signatures to run for mayor, but some names weren’t on the city’s voters list and were scrapped.

Nomination papers are due Wednesday.

Regardless, Ouellette said he’s confident he’ll make it to the next stage of the mayoral election.

While Ouellette discussed making Winnipeg better for children, Scott Gillingham wants to make it easier for adults to find restaurants with patios.

He wants temporary patio permit changes, which were made during the COVID-19 pandemic, to become permanent. It allowed restaurants to open patios under a fast-tracked permit process.

“These reforms can generate a real on-street economic boost based on what we’ve seen in other cities,” Gillingham said in a statement.

Restaurants with an outdoor space would be automatically entitled to offer patio service under a set of simplified rules, with the city offering standardized patio layouts.

The last round of temporary patio permits expire on March 31, 2023. Restaurateurs looking to set up long-term patios past that date have to provide an application with several steps, including providing dimensioned drawings and letters of support from building owners.

Getting to those patios could be easier if Jenny Motkaluk’s has her way. She promised to do a wide review of Winnipeg Transit stops in the city and make adjustments to ensure a majority of Winnipeggers live within 800 metres of a bus stop.

This will make it easier for those looking for work to be able to use public transit to get there.

“Some of our biggest employers located at our industrial parks have told me they cannot hire some great potential employees because the transit system cannot get them to and from their shifts on time,” Motkaluk said in a statement.

“We need to support those businesses and their workers. Some industrial areas have no service at all. That will change when I’m mayor.”

Rana Bokhari’s campaign promise of the day was to rethink the Winnipeg Police Service budget by renaming it the “crime prevention budget” and reallocate 10 per cent of it to local support services that help prevent crime.

“There is a disconnect between the top brass and the officers on the street,” Bokhari said in a statement. “The WPS has lost their way and need help.”

This would mean $32 million would be allocated away from policing and toward city support services.

Bokhari said she planned to revisit the city’s operational review of the WPS taken in 2013 and possibly commission a new review.

Explore the glory of gardening, and how it can help sow the seeds of wellness It was May 2022. My first batch of parsnip seeds failed to germinate … END_OF_DOCUMENT_TOKEN_TO_BE_REPLACED

CIVIC chiefs have been quizzed over their plans to splash an 'enormous' budget on the new pavilion at King George V playing fields. … END_OF_DOCUMENT_TOKEN_TO_BE_REPLACED

Gardeners like a challenge and the sense of accomplishment when trying something new. Forcing poinsettias and Christmas cactus to rebloom provides … END_OF_DOCUMENT_TOKEN_TO_BE_REPLACED

We leave Denmark with the leaves falling. The rowan is reddening, berries and branches. The cherry trees turning like in a watercolour painting. … END_OF_DOCUMENT_TOKEN_TO_BE_REPLACED