”Fallen Monuments (Obelisk Fragments, Still Water)” by Dawn Holder is part of the exhibition “Weep, Their Banner of Monument,” which will be on display at Franklin College from Sept. 12 to Oct. 28. A public presentation by Holder opens the exhibition on Sept. 12.

The public spaces in our towns and cities tend to be the heart of the community.

Blending natural elements such as trees, flowers and grass with man-made monuments and features, these spaces are built to gather people to them. But the more Dawn Holder examined those places, the more she wondered if they spoke the same way to everyone.

Growing up and living in the southeast United States, Holder witnessed the role that monuments played in different communities. Memorials to the Confederate war effort loomed particularly large.

“I was interested in making work that was a critique of that, and asking people to think about and challenge that status quo,” she said. “A lot of that work is engaging, either directly or indirectly, those Confederate monuments.”

Holder is the first guest artist of the new school year at Franklin College. Her exhibition, “Weep, Their Banner of Monument,” explores different landscapes and their significance on both society and culture using ceramics, photography and mixed media. One feature will be a sculptural obelisk, inspired by a Confederate monument in her own hometown, that she has tarred and feathered.

To unveil the exhibition, Holder will give a lecture at 7 p.m. Monday at the college’s Henderson Conference Room. She hopes her work starts conversations among the Franklin College community.

“I want people to reflect about the public spaces we have here in Indiana and think about what kind of messaging is used there, who is invited, who is allowed to be safely in those spaces, and who might not be,” she said. “And then think about if there’s a way we can work together as a society and make our public spaces feel safe and welcome for all people.” 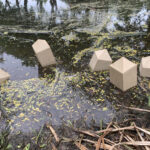 ”Fallen Monuments (Obelisk Fragments, Still Water)” by Dawn Holder is part of the exhibition “Weep, Their Banner of Monument,” which will be on display at Franklin College from Sept. 12 to Oct. 28. A public presentation by Holder opens the exhibition on Sept. 12. 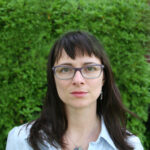 Dawn Holder, an Indianapolis artist, will present “Weep, Their Banner of Monument,” which will be on display at Franklin College from Sept. 12 to Oct. 28. A public presentation by Holder opens the exhibition on Sept. 12. 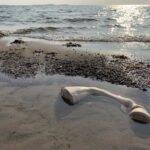 “Fallen Monument (Equestrian Fragment, North Sea)” by Dawn Holder is part of the exhibition “Weep, Their Banner of Monument,” which will be on display at Franklin College from Sept. 12 to Oct. 28. A public presentation by Holder opens the exhibition on Sept. 12.

Holder is an associate professor of studio art at IUPUI’s Herron School of Art and Design, currently serving as the graduate director of the visual arts master’s degree program.

She has attended residencies at well-known arts organizations such as the Red Lodge Clay Center in Montana, Pentaculum at Arrowmont School of Arts and Crafts in Gatlinburg, Tennessee, and Guldagergaard International Ceramics Research Center in Denmark.

Art has always been something she was called to do.

“I was raised in a household that valued creativity. I always took art classes in high school, and as soon as I got a car, my after-school activity was taking ceramics classes at a local art center,” she said. “That eventually led to me being a ceramics major in college.”

Holder’s work tends to be project-based, with a flurry of art using similar materials, styles and approaches. Much of her creations involve repetition.

“I just love the physical act of interacting with materials, and using creative materials and processes to express ideas about the world,” she said.

“Weep, Their Banner of Monument,” was born nearly five years ago. Holder had lived in Atlanta and in Arkansas before moving to Indiana. One of her longstanding interests has been the way that people and society shape and alter the landscapes around them.

She would examine the public spaces in the communities she was in, thinking about the connections between the Confederate monuments that dominated the South and imperial Roman monuments from antiquity.

“Often when you start talking to people, especially in the South, they say, ‘Don’t change history. You’re erasing history.’ Part of what I wanted to do was bring to light that nothing is permanent,” Holder said. “I use strategies such as things that are decaying or falling apart or broken, to visualize that these things aren’t going to stay whole forever.

“We can make the decision to think about how we want to present and create our public spaces. They don’t have to have these monuments in them.”

Holder also spent time recording the wording that was found on the monuments, then used a generator to cut up those messages and reassemble them. She was able to pull new phrases from that work.

“As I rearranged the text, I wanted to keep that solemn feeling that monument text often has, but to take the racist, bigoted past out of it and make it more about ideas of loss,” she said.

Holder’s lecture, titled “Weep, Their Banner: Fallen Monuments,” will examine and explain her observations in creating this work. The event is free and open to the public. An opening reception will follow the lecture.

The exhibition is on display at the Johnson Center for the Fine Arts from Monday to Oct. 28. Franklin College faculty, staff and students with a valid college ID may view the exhibit 8 a.m. to 5 p.m. Monday through Friday.

”Weep, Their Banner of Monument”

What: A lecture by artist Dawn Holder to open her exhibit investigating elements of landscape and their socio-cultural significance through ceramics, photography and mixed media. An opening reception will follow.

Where: Henderson Conference Room, Johnson Center for Fine Arts, Franklin College. The arts center is at the corner of Grizzly Drive and Branigin Boulevard.

Cost: Free and open to the public

FANS expecting to see Jason Donovan at the Cliffs Pavilion have been disappointed the last two nights. Jason, alongside Alexandra Burke, start in … END_OF_DOCUMENT_TOKEN_TO_BE_REPLACED

You might know me as the plant lady who for years has attended the Village meetings requesting better services, with scant results.I have been told by … END_OF_DOCUMENT_TOKEN_TO_BE_REPLACED

There is a real upside to two new sweet potatoes making their debut in 2023. I mean that tongue and cheek as that is actually part of their name, but … END_OF_DOCUMENT_TOKEN_TO_BE_REPLACED

LEWISTON, N.Y. — The success of the recently completed The Apartments at Legacy complex is prompting LMK Realty Associates LLC to move forward with a … END_OF_DOCUMENT_TOKEN_TO_BE_REPLACED