A total of 112 different compounds were detected over the 140 parent pesticides and metabolites screened in hair samples (80% of the compounds screened). The full lists of compounds with their acronyms, the details of their full names and chemical families are provided in Tables 1 and 2.

As a whole, 51 BRPs over 67 analyzed (76%) were detected in small mammal hair, with 27 parent chemicals detected out of 39 screened (67%) and 25 metabolites detected out of 28 (89%) (Table 1). Thirteen compounds were present in more than 75% of individuals: DMP, PNP, 1-(3,4-dichlorophenyl)urea, DEP, PCP, 3Me4NP, 1-(3,4-dichlorophenyl)-3-methylurea, DETP, fipronil, fipronil sulfone, trifluralin, DMTP and HCB. Most of them are transformation products of organochlorine, organophosphorous, urea and phenylpyrazole pesticides. Then, the proportion of detection rapidly dropped under 25% of the samples. Only three compounds were detected in 50–75% of the individuals (Table 1: lindane γ-HCH (organochlorine insecticide), terbutryn (triazine/triazinone herbicide) and fenuron (urea herbicide). Five substances were found in 25–50% of the animals: DMST (metabolite of tolylfluanide, an amide fungicide), flusilazole (azole fungicide), α-endosulfan (organochlorine insecticide), DMDTP (organophosphorous insecticide metabolite) and diuron (urea herbicide). The 10 highest measured concentrations ranged between 30 and 118 ng/g, and were mostly represented by DMP (seven of the 10 values) together with PNP and 1-(3,4-dichlorophenyl)urea. Seven compounds exhibited concentrations higher than 10 ng/g, which were the same as the most frequent: DMP, PNP, 1-(3,4-dichlorophenyl)urea, DEP, PCP, 3Me4NP, plus DEDTP (organophosphorous metabolite, 6% of individuals). Considering the 16 BRPs that have never been detected, 13 were parent pesticides and three were metabolites, distributed in one fungicide, three herbicides, and 12 insecticides/biocides. The non-detected compounds belong to several chemical families including organochlorines, organophosphorous, carbamate, and urea pesticides.

A total of 61 CUPs out of 73 analyzed were detected in small mammal hair, with 54 parent pesticides out of 66 tested (82%) and seven metabolites detected out of seven screened (100%) (Table 2). Many of the detected CUPs were found in a large proportion of individuals: 25 compounds were detected in more than 75% of the individuals, which means that 41% of the 61 detected CUPs were present in 75–100% of individuals. These 25 most frequently detected compounds belonged to various chemical families and all uses of CUPs (Table 2). The herbicides belonged to the families of organochlorines (metolachlor and metazachlor), acid herbicides (MCPA, 2,4-d,dichlorprop and mecoprop), thiocarbamates (prosulfocarb), amide pesticides (dimethachlor), uracils (lenacil), and dinitroaniline (pendimethalin). The fungicides were of the main families strobilurines (azoxystrobin and pyraclostrobin), azoles (tebuconazole, epoxiconazole, thiabendazole, prochloraz, and propiconazole; cyproconazole in 73% of individuals), carbamates (carbendazim) and carboxamides (boscalid). The most frequently detected insecticides were mainly metabolites of pyrethroids (3-PBA, Cl2CA, and ClCF3CA), as well as neonicotinoids (thiacloprid and imidacloprid) and the specific metabolite of chlorpyrifos TCPy (3,5,6-trichloro-2-pyridinol; organophosphorous pesticide). Noticeably, the five herbicides isoproturon (urea), propyzamide (benzamide), chlortoluron (urea), oxadiazon (oxadiazin) and diflufenican (carboxamide), as well as the fungicide trifloxystrobin (strobilurin) and the insecticide cypermethrine (pyrethroid), were detected in at least 50% of the samples (Table 2). Five more compounds were detected in 25–50% of animals: zoxamide (benzamide), difenoconazole (azole), cyhalothrin and Br2CA (pyrethroids), and 2,4-DB (acid herbicide). The 10 highest measured concentrations ranged from 200 to 500 ng/g, which were far higher than for BRPs. These high concentrations were found for the fungicides boscalid, carbendazim, and prochloraz and the herbicides dichlorprop, MCPA, and propyzamide. A greater number of compounds exhibited higher concentrations than observed for BRPs, since 29 compounds presented concentrations higher than 10 ng/g. Moreover, 16 compounds were quantified at higher levels than 50 ng/g, and 10 compounds at higher levels than 100 ng/g (Table 2). The 10 compounds that had the highest concentrations were the herbicides propyzamide, MCPA, dichlorprop, diflufenican, mecoprop, and metolachlor, and the fungicides boscalid, epoxiconazole, carbendazim, and prochloraz. They were not all among the most detected compounds (Table 2). Six compounds exhibited concentrations ranging from 50 to 100 ng/g: the insecticide imidacloprid, the herbicides aclonifen and isoproturon, and the fungicides cyproconazole, propiconazole and tebuconazole. Various chemical families are represented among the CUPs exhibiting high concentrations in small mammals, including carbamates, carboxamids and benzamids, acid and urea herbicids, azoles and neonicotinoids (Table 2). The insecticides showed concentrations overall lower than herbicides and fungicides, since no value above 50 ng/g was measured within insecticides except for imidacloprid. Besides the neonicotinoid imidacloprid, the insecticides showing the highest values (> 10 ppb) were all pyrethroids, either parents or their metabolites (cyfluthrine, cyhalothrine, permethrine, 3-PBA, Br2CA, Cl2CA). Among the 12 CUPs that have never been detected, only parent compounds were present, with six fungicides, two herbicides and four insecticides belonging to various chemical families such as azole, carbamate, organophosphorous, triazine, neonicotinoid, strobilurine, oxadiazine and urea pesticides.

A significant positive relationship was found between detections of CUPs in small mammal hair samples and the quantities of pesticides sold in 2016 in the Region were the ZAPVS is located (i.e. Deux-Sèvre, where most of small mammals in this study were captured and analyzed) (Spearman’s rho = 0.66, p-value < 0.001, Supplementary Fig. S1). The number of quantification above 10 ng/g in hair of small mammals was also found significantly positively associated to the quantities of each corresponding pesticide sold in 2016 in Deux-Sèvres (Spearman's rho = 0.58, p-value < 0.001, Supplementary Fig. S1).

Number of compounds and concentrations according to species, habitat, zone and farming

Few differences were found in mice contamination by BRPs between the two sites of sampling ZAAJ and ZAPVS. Mice from ZAAJ showed a slightly higher number of banned herbicides, but significantly lower concentrations of banned fungicides and herbicides than mice from ZAPVS. The pattern was clearly different for CUPs, for which mice from ZAPVS exhibited higher number of compounds and greater concentrations than mice from ZAAJ, but the difference was not significant for current fungicides (Fig. 1, Supplementary Tables S1–S2).

Number of BRPs and their concentrations were overall similar between organic and conventional farming, except for herbicides in shrews from ZAPVS, which showed higher number and concentrations in conventional than in organic farming contexts (Fig. 2, Supplementary Tables S1–S2). However, this result might be considered cautiously since metabolites of urea herbicides were included in the class of BRPs because most of these herbicides are outlawed, but a few urea compounds were still authorized in 2016 (Tables 2 and 3). Recent use might thus confound this result on BRPs. While a general trend of larger number and concentrations of CUPs in conventional than in organic contexts might be noticed numerically and graphically (Fig. 2, Supplementary Tables S1–S2), we did not detect any significant differences between CF and OF for the CUPs analyzed in this study. 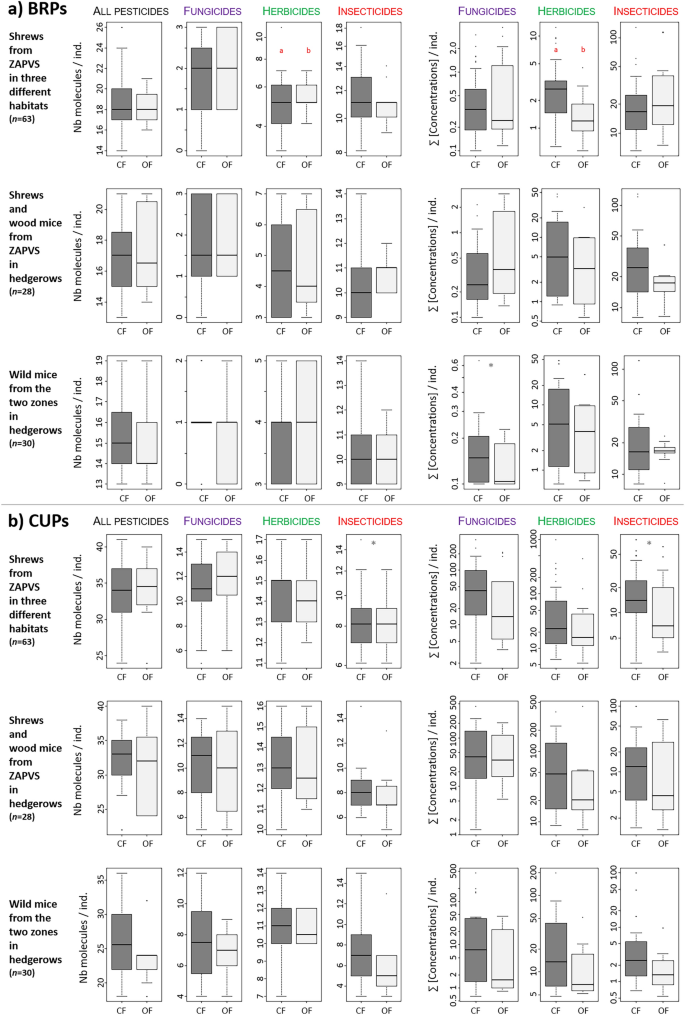 Boxplots of number of molecules and sum of concentrations for (a) banned and restricted pesticides (BRPs) and (b) currently used pesticides (CUPs) according to farming practices. Statistical differences between groups are indicated by red asterisks (statistical significance: p-value< 0.05), if close to significance level (0.10 > p-value > 0.05) the color of asterisk is grey. CF Conventional farming, OF Organic farming.

Contamination profile according to habitats, species and sites

Multivariate analyses showed that profiles of both BRPs and CUPs differed significantly between habitats, species and zones (Fig. 3). The profiles of compounds were slightly to moderately explained by the factors tested considering the determination coefficients, which ranged from 0.063 to 0.263. Organic farming was never retained as an explanatory factor in models (p-value > 0.05 and delta AIC > 2), meaning that profiles did not differ significantlty between animals captured in OF or CF contexts. 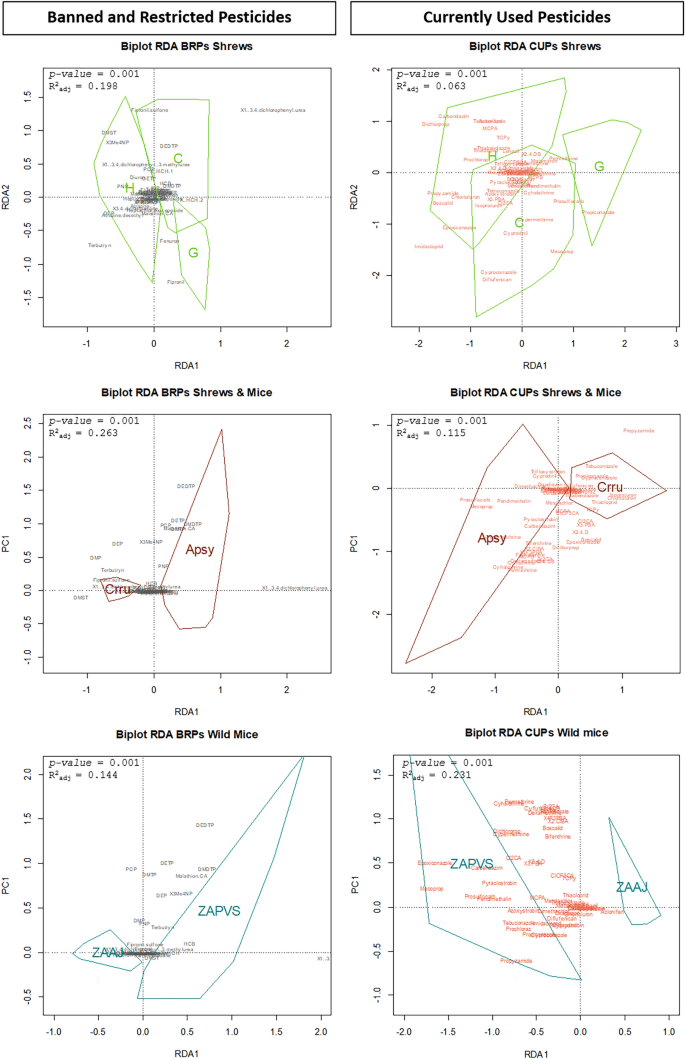 Profiles of pesticide residues were significantly correlated to the type of habitat (p-value = 0.001), with 19.8% and 6.3% of variance explained for BRPs and CUPs, respectively. Profiles of BRPs in hedgerows were dominated by relatively high concentrations of DMST, 3Me4NP, 1-(3,4-dichlorophenyl)-3-methylurea, PCP, diuron, DETP, PNP, atrazine, 3,4-dichloroaniline, DEP, and atrazine desethyl (Fig. 3). In cereals, profiles were associated to high levels of fipronil sulfone, DEDTP, lindane, HCB, and DMDTP while grasslands showed profiles associated with fenuron and fipronil. For CUPs, contamination in cereals was characterized by high levels of cyproconazole, diflufenican, cyprodinil, mecoprop, cypermethrin, prosulfocarb, cyhalothrin, pendimethalin, and permethrin. Profiles of CUPs in hedgerows were associated with high levels of carbendazim, dichlorprop, aclonifen, tebuconazole, MCPA, TCPy, thiabendazole, thiacloprid, lenacil, prochloraz, propyzamide, chlortoluron, boscalid, and epoxiconazole. In grasslands profiles were characterized by the concentration of propiconazole.

The contamination significantly differed according to the sampling zone (p-value = 0.001), which explained 14.4% and 23.1% of variance for BRPs and CUPs, respectively. Contamination in mice from ZAPVS was associated with high levels of DMDTP, malathion carboxylic acid, 3Me4NP, HCB, and 1-(3,4-dichlorophenyl)urea. Mice from ZAPVS showed, overall, higher concentrations of CUPs than in ZAAJ. The contamination profiles in ZAPVS was dominated by high levels of epoxiconazole, carbendazim, pyraclostrobin, mecoprop, prosulfocarb, pendimethalin, azoxystrobin, tebuconazole, imidacloprid, prochloraz, propiconazole, and propyzamide (Fig. 3).

Hierarchy of determinant factors on contamination profiles and discriminating pesticides

Inference trees allowed displaying the compounds that characterized the contamination profiles of small mammals, showing the mixtures of pesticides that small mammals accumulated and thus were exposed to. Conditional inference trees showed that the factor with the strongest association with contamination profiles differed between BRPs and CUPs: while profiles firstly differed according to habitat for BRPs, they were split according to species for CUPs (Figs. 4 and 5). The type of farming “organic” or “conventional” did not provide any significant splitting of the multivariate dataset. 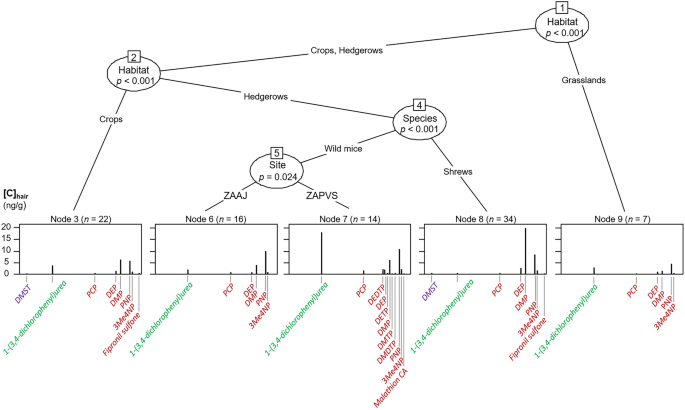 Multivariate conditional inference tree showing the factors significantly splitting the profiles of contamination by banned and restricted pesticides. ZAAJ = Zone Atelier Arc Jurassien; ZAPVS = Zone Atelier Plaine et Val de Sèvre. The names of fungicides are written in purple, those of herbicides in green and those of insecticides in dark red. The names of metabolites are in italics. See Table 1 for detailed meaning of compound acronyms. 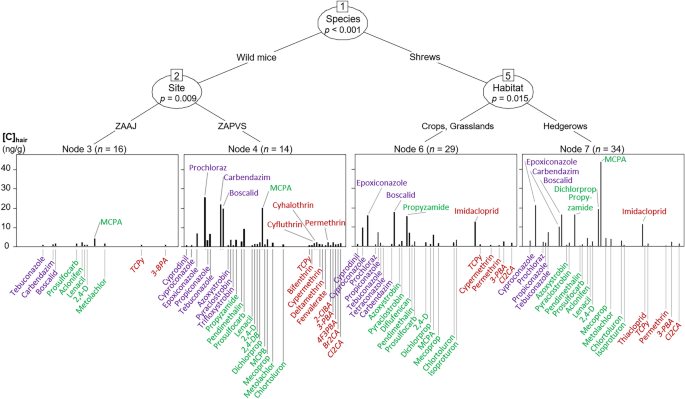 Multivariate conditional inference tree showing the factors signifcantly splitting the profiles of contamination by currently used pesticides. ZAAJ = Zone Atelier Arc Jurassien; ZAPVS = Zone Atelier Plaine et Val de Sèvre. The names of fungicides are written in purple, those of herbicides in green and those of insecticides in dark red. The names of metabolites are in italics. See Table 2 for detailed meaning of compound acronyms.

Profiles of CUPs were split between shrews and mice, but showed a common pattern of high number of molecules in the two groups of species, and elevated concentrations for several fungicides, herbicides and insecticides (Fig. 5). In shrews, concentrations reached overall higher levels, especially for insecticides and notably imidacloprid (Fig. 5). Many CUPs were common to both species, although the compounds presenting the highest concentrations were different. As an example, in mice, many pyrethroids and their metabolites were quantified, while in shrews less compounds showed high concentrations but the concentrations reached were greater. The profiles of CUPs in mice were split between the two sampling zones, the contamination being discriminated by a lower number of molecules and overall lower concentrations in ZAAJ than ZAPVS. In shrews, the profiles of CUPs were separated according to the habitats, with open habitats crops and grasslands opposed to hedgerows. In both cases, shrews exhibited high concentrations for a large number of compounds, and this was observed in the different habitats in the case of epoxiconazole, boscalid, propyzamide, 2,4-d, imidacloprid and 3-BPA for instance. Moreover, profiles in shrews from hedgerows showed high concentrations of some other compounds such as carbendazim, dichlorprop, metolachlor, and MCPA, as well as several pesticides at lower levels not evidenced in profiles from other habitats like thiacloprid, aclonifen and lenacil. Some CUPs were mostly found in shrews captured in crops or grasslands such as cyprodinil, tetraconazole, diflufenican, and cypermethrin (Fig. 5).

Blue skies, sunny weather, and an amazing food scene draw tons of visitors to Southern California. Whether you live in California or are just … END_OF_DOCUMENT_TOKEN_TO_BE_REPLACED

Observant passers-by may have noticed that there has been a little bit of change to the gazebo, or outdoor shelter, outside the Keyano Centre. It is … END_OF_DOCUMENT_TOKEN_TO_BE_REPLACED