Overlooking the banks of the Weihe River in Shaanxi, China, Beijing-based design studio PLAT ASIA has realized a two-story pavilion that welcomes locals and visitors to unwind and enjoy the surrounding vistas. The horizontality of the scenery — with the city’s agricultural landscape, river, highway, and skyline stretched from north to south — is reflected in the architecture of the building, which reveals itself as a continuous interplay between the interior and exterior.

The triangular volume explores a certain primitiveness, which is expressed in a contemporary architectural language. Emerging as a traditional two-slope roof, the brutal structure is interrupted by austere geometrical openings that overlook the horizon and fade out the boundaries of artificial and natural. Under this colossal roof, the design team cloaked the structure with copper plates that reflect the hues of the vast landscape, thus blurring further the edges of the building.

generating sensible bonds between the inside & outside.

Designed by PLAT ASIA in 2017, the monumental triangular volume saw its realization earlier this year. ‘Weihe River Landscape Pavilion’ is one of six public buildings in the riverbank area, dedicated to daily exercise needs for citizens. Open to all, the building comprises a two-story vistas pavilion, a store, and a single public toilet. Thanks to its ample openings that pierce the otherwise solid structure, the design not only maximizes the sensorial experience, but also adapts to thermal, ventilation, and lighting sustainability principles for low-cost maintenance in the future.

Drawing from its historical context, the outer envelope employs a characteristic triangular shape that applies a rammed-earth texture. In contrast, the inside is coated with copper plates creating a visual continuity with the hues of the outer surface. The metal sheet reflects sunlight and creates a play of glows and shadows mirroring the panorama that unfolds around. Donghyun Jung, the principal architect of PLAT ASIA, has mentioned: ‘Only contemporaneity could approach architectural primitiveness’. 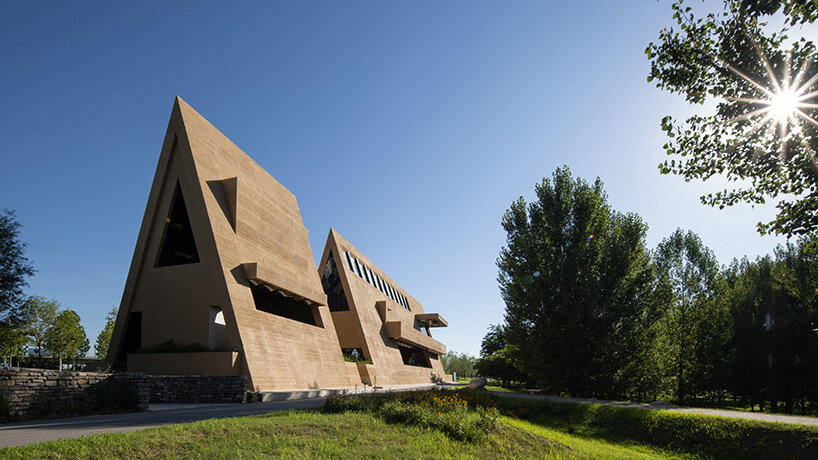 Summer is here, and this week Gardening Australia celebrates the bounty of summer gardens. The episode is also recognising International Day of People … END_OF_DOCUMENT_TOKEN_TO_BE_REPLACED

The Katara Traditional Dhow Festival, organised by Katara - the Cultural Village and based on the region’s maritime heritage, continues to dazzle as … END_OF_DOCUMENT_TOKEN_TO_BE_REPLACED

DAYTON, MN - (NewMediaWire) - November 29, 2022 - A property's landscape is an extension of the indoor living space, and the landscaping experts at … END_OF_DOCUMENT_TOKEN_TO_BE_REPLACED