Rachel Simeon walks down the sidewalk at her Salt Lake City home on Friday, Aug. 20, 2021. The Salt Lake City Council is mulling changes to its landscaping regulations that could allow for more xeriscaping. (Laura Seitz, Deseret News)

SALT LAKE CITY — Darin Mano says he knows how confusing Salt Lake City’s landscaping ordinance can be even as a member of the Salt Lake City Council.

There are plenty of rules in place, that now seemingly contradict recent efforts to conserve water, inside a large document that isn’t easy to read.

“It is complicated to know exactly what you’re allowed to do,” he said.

This — along with one of the worst droughts in Salt Lake City’s history — is why city leaders are now considering new amendments to simplify and overhaul landscaping regulations for residents and business owners in Utah’s capital. City civil enforcement, public utilities workers and planners recently collaborated on a report that reviews possible changes to landscaping codes, especially rules regarding park strips.

Michaela Oktay, the deputy director for the Salt Lake City Planning Division, presented the report to members of the council during a work session on Tuesday. The changes, she said, would help the city align its goals and regulations, which might not be aligned right now and could be a source of some confusion.

Should park strips stay or go?

Park strips — the space between a street and sidewalk in front of homes, businesses and government buildings typically filled with grass — are one of the biggest landscaping topics that Salt Lake City seeks to address. The document highlights ways to amend the city’s park strip rules or even eliminate parts of it.

The city currently requires that vegetation, such as turf grass, covers at least 33% of all park strips that are 36 inches or larger. A tree is also required in some circumstances but a tree canopy doesn’t count toward the 33% rule, Oktay adds.

As noted by the document, the vegetation helps the city meet regulatory and environmental stormwater runoff quality requirements by slowing runoff flows and even filtering pollution before it runs off into storm drains and ultimately the Jordan River and the Great Salt Lake. Oktay said the vegetation, especially trees, can also help reduce urban heat island effect.

Grass park strips also consume a lot of water, though. The Utah Division of Water Resources estimates that homeowners, on average, spend 5,000 to 8,000 gallons of water on park strips every year. Many residents have switched to xeriscaping to reduce water consumption as a result of an ongoing drought — the West’s worst 20-year span in 1,200 years.

As residents began to flip their strip, the vegetation rule became one of the more “frequently violated” city codes, the Planning Division report states.

“One of the biggest challenges with the code is that we’re finding people just aren’t aware of what’s required,” Oktay said. “It could be partly to do with the 200-plus some regulations we have in the code. And it’s very time-consuming to administer, very time-consuming.”

The balance between the code and the city’s calls for water conservation could be another source of confusion. Stan Holmes is one of the many Salt Lake City homeowners caught up in this confusion over the past few years. In a video presentation to the East Liberty Park Community Organization in April, Holmes spoke about his family’s decision to xeriscape the yard outside of their Capitol Hill home six years ago in an effort to conserve water, reduce the pollution from mowing their lawn and because they preferred the aesthetic.

The family removed all the sod surrounding their home, though they kept a few trees. They also replaced their entire water system with drip lines and sprinklers for the tall grass and other water-efficient shrubs planted in place of the sod. To top it off, they removed their park strip land and replaced it with gravel with no plants, which meant no water was needed for the park strips.

He never heard anything about it until last year, when he received a notice from the Salt Lake City Department of Community and Neighborhoods warning him that the family’s landscaping did not meet city code because vegetation didn’t cover at least one-third of the park strip. Holmes was puzzled because it came as city officials emphasized the importance of water conservation at the same time he received notices about the vegetation code.

“So basically we found out we were in violation of a code that was written over 20 years ago. … So I guess the question then is, what do you do about this 20-year-old ordinance, that was written before the drought got really serious?” he questioned, at the time. “It doesn’t even mention xeriscaping in it.”

Rachel Simeon, another Salt Lake City resident, had a similar experience last year. She said that she was told she could face daily fines if she didn’t comply with the vegetation rule. 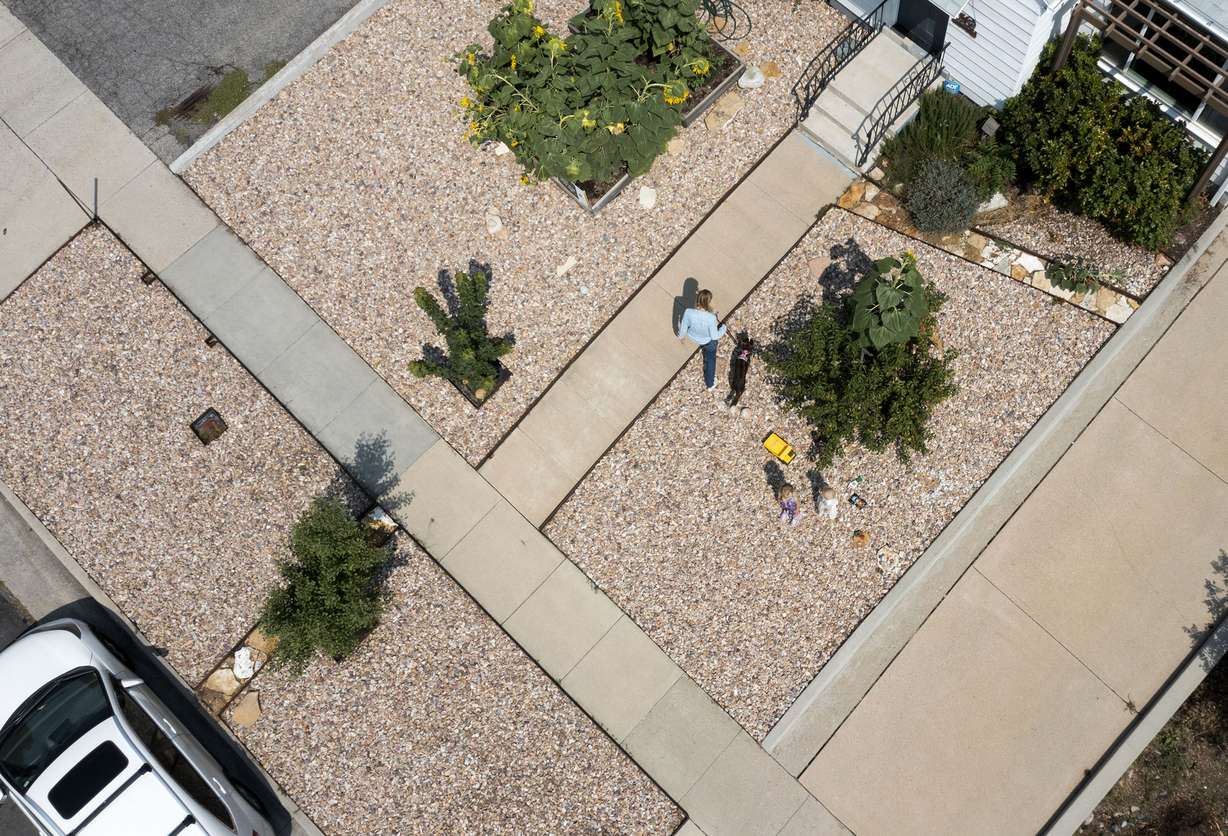 Rachel Simeon and her daughters are photographed on their Salt Lake City property on Friday, Aug. 20, 2021. Simeon says she was dumbfounded when she got a letter from Salt Lake City code enforcement, in the midst of Utah’s historic drought, that she needed to add more vegetation to her park strip, which would require more water. (Photo: Laura Seitz, Deseret News)

Oktay pointed to a photo of a sod-filled park strip projected on a screen next to the council during Tuesday’s meeting. This, she explained, is considered the standard by the city code definition, but it also clashes with the city’s recent efforts to cut back on water waste, as Holmes said.

“With this type of landscaping, is that appropriate given our climate, the availability of water and the threat of increasing temperatures associated with climate change?” Oktay asked rhetorically, as it’s a question the councilmembers will have to answer themselves.

The document outlines a few options for the city council to consider, such as creating a new vegetation requirement calculation for every style of park strip, allowing tree canopy to count toward the 33% rule or simply eliminating the rule altogether. Yet eliminating the rule would “likely result in a hotter environment and increase storm runoff into the stormwater system,” the report warns.

The document adds that there are other landscaping rules that the city could reconsider, such as its artificial turf ban in park strips, required landscaped yards or as something that counts toward the city’s vegetation coverage rule.

The city began a temporary enforcement pause on some of these landscaping rules while it figures out what to do with the current plan.

Tuesday’s presentation was purely informational before the council takes up any code modifications. However, members of the city council acknowledged that any changes to the city code may ultimately be determined through the ranking of city priorities and trade-offs — if they do vote to modify the code.

Simply put, the city may have to consider if reducing water consumption is more important than urban heat island effect or stormwater improvement or vice versa.

Thinking out loud, Mano said the city doesn’t have to eliminate all three from being considered but would prefer if the city invested more in water conservation than it currently does, whether through incentives or new regulations. This could include a “materials blacklist” that bars certain vegetation or materials from being used in lawns or park strips, Salt Lake City Councilwoman Victoria Petro-Eschler suggested.

“We don’t have to reinvent the wheel,” added Salt Lake City Councilwoman Ana Valdemoros, recommending that Salt Lake City review what is working in other cities dealing with drought issues.

Clearing up the regulation confusion should also be a major city priority, many members of the council said Tuesday.

“Honestly, it’s ridiculous right now. As a lawyer, as a council member, I’m not confident I can do this to my house without assistance from someone else in this city,” said Salt Lake City Councilman Chris Wharton. “That’s sort of an indictment of the whole system right now.”

The council will have the final say on the matter, though no timetable has been set up for public comment on the matter or a vote. The city’s goal is to have a plan ready for public review and potentially a vote before spring 2023.

City officials added that they will continue the enforcement pause as they explore new code options.

Carter Williams is an award-winning reporter who covers general news, outdoors, history and sports for KSL.com. He previously worked for the Deseret News. He is a Utah transplant by the way of Rochester, New York.

Gardens on display: Gardens of all types will be on display for the general public to see in Tocumwal. … END_OF_DOCUMENT_TOKEN_TO_BE_REPLACED