Designer Marjan van Aubel has collaborated with Dutch architecture studio V8 Architects to create a pavilion topped with multicoloured solar panels, which Dezeen has captured in the third and final video in a series of Instagram reels for Dutch Design Week.

“I aim to change the perspective on solar technology into solar design,” Van Aubel told Dezeen.

“We want to change the narrative on solar energy,” she continued. “We need the power of design to really show that it [solar power] can become beautifully integrated into our environment – something we want to be surrounded with.”

Visitors wanting to see the panels up close could travel up a set of stairs to an opening in the curved steel pavilion. Here, they could also have their photo taken against the backdrop of the panels by a camera installed in an adjacent building.

Meanwhile, those looking to take a break from the many design exhibitions and events nearby could rest on a circular mirrored bench underneath the pavilion’s roof. 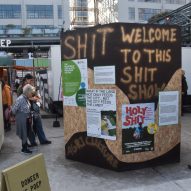 Van Aubel said she used multiple colours for the panels, which convert solar power into light and heat, to demonstrate how solar technology can be beautiful.

“We chose to use really fun, beautiful coloured panels – you can see how they’re printed with this colour – to move away from this one-sided perspective on solar,” Van Aubel explained. “It can’t just be only technological but needs design, art, all these perspectives.” 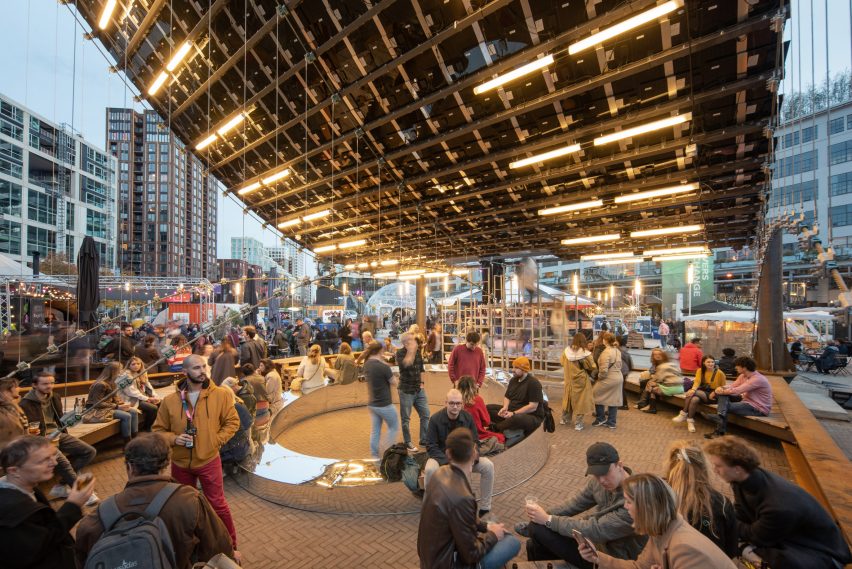 Visitors could gather underneath the pavilion during DDW

Elsewhere in the video series for DDW, Dezeen interviewed designer Fides Lapidaire about Shit Show, an exhibition about the benefits of using human waste as compost and rounded up several design highlights from the week.

Dezeen is a partner for DDW and published video highlights from the festival throughout the month.

The photography is by Aiste Rakauskaite.

Dutch Design Week 2022 took place from 22 to 30 October in Eindhoven. See Dezeen Events Guide for information about the many other exhibitions, installations and talks taking place throughout the week.

This video was produced by Dezeen for Dutch Design Week as part of a partnership. Find out more about Dezeen partnership content here.

Jeff Floyd is a private green industry consultant. He can be reached at [email protected] By Jeff Floyd Certified horticulturist and … END_OF_DOCUMENT_TOKEN_TO_BE_REPLACED

With Joyce Russell WHAT a wet and windy time November has been! It’s getting colder too and there is no doubt that winter is with us. Most trees have … END_OF_DOCUMENT_TOKEN_TO_BE_REPLACED

The other night at about 2 a.m., I was intently scanning gardening sites seeking a specific carex (sedge). I paused, thinking I had finally gone over … END_OF_DOCUMENT_TOKEN_TO_BE_REPLACED

LIVONIA — Kylie Buckley picked up where she left off to conclude her junior season, exploding offensively in Livonia’s 66-29 win over Le Roy over the … END_OF_DOCUMENT_TOKEN_TO_BE_REPLACED