The Green Pavilion, a glass pavilion with a pyramidal roof, was designed by architect Odile Decq to evoke historic orangeries and installed in the Jardin des Tuileries as part of the Paris+ par Art Basel art fair.

Decq was commissioned by Galerie Philippe Gravier to create a functional art piece to be placed in the iconic public gardens during the 2022 edition of the art fair, which concluded on 5 November.

The pavilion was located in the Jardin des Tuileries

The Green Pavilion is an updated version of The Black Pavilion that Decq created in 2015 for the gardens of a 17th-century castle in Rouen, which recreated the form of a pavilion found on the castle’s grounds in black one-way glass intended to reflect the surrounding landscape.

It was never erected on its proposed site but instead used as an installation piece on the Place de la Concorde during the FIAC Art Fair of 2019. 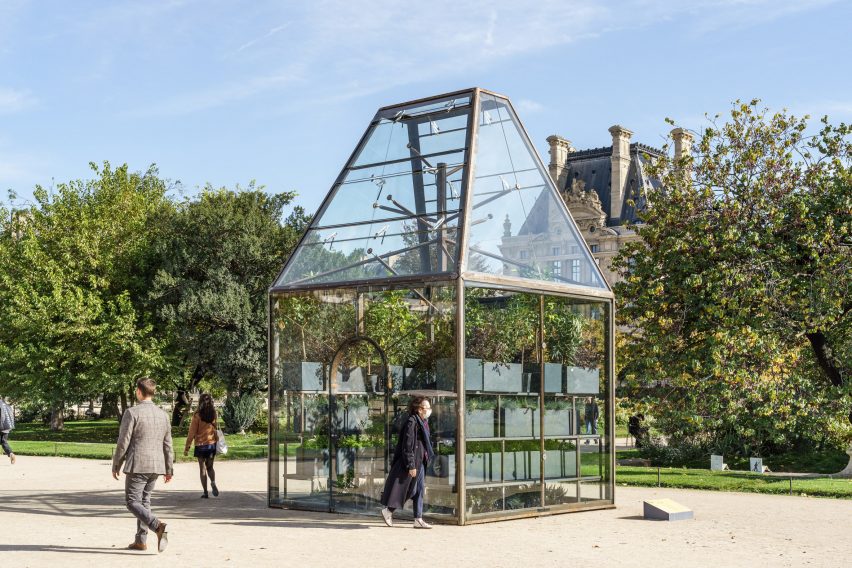 It has a pyramidal roof

For the new pavilion, the architect swapped the black glass for transparent glazing and adapted the design to allow it to function as a greenhouse that evokes the kitchen gardens created on this site in the 16th century.

“It was designed with a minimalistic structure, the bare minimum to hold the massive glass panels. The steel structure is left rough as it is.” 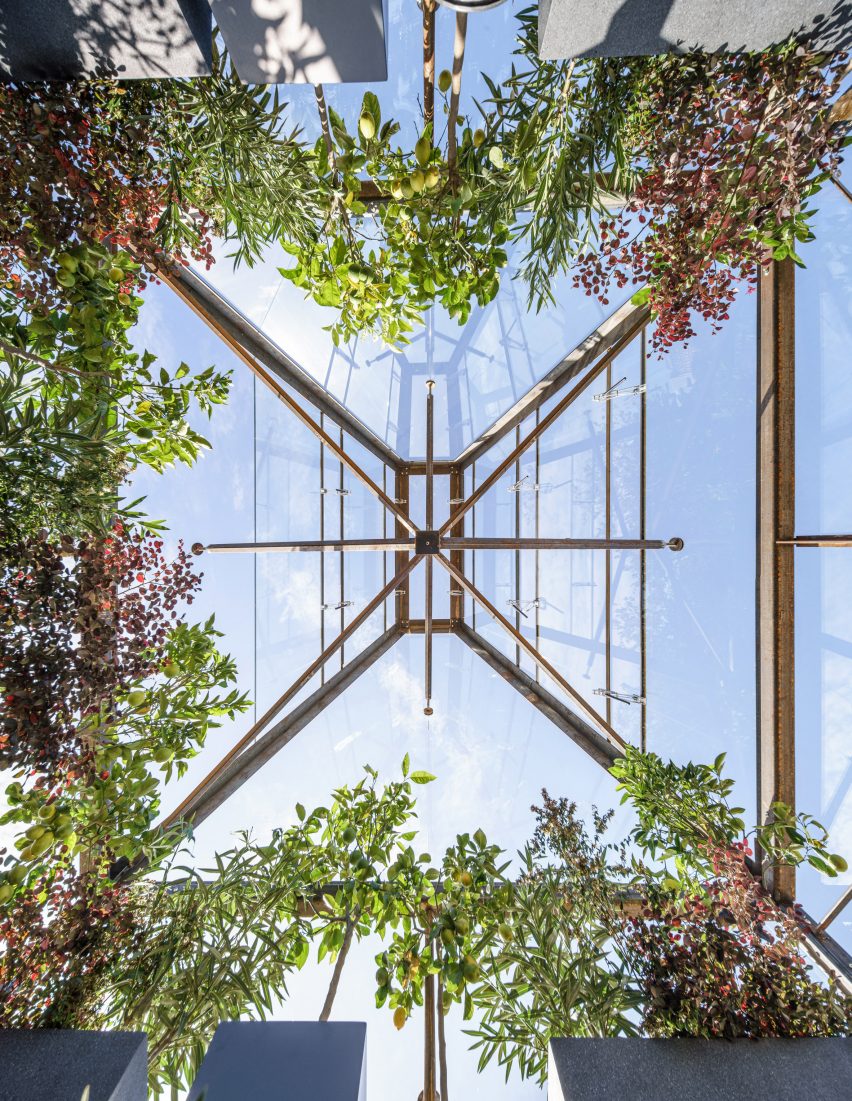 The Green Pavilion was filled with herbs and citrus plants

The glazed structure allowed passersby to view the various delicate and rare plant species housed inside.

At night, candles were lit and the pavilion took on the appearance of a lantern. 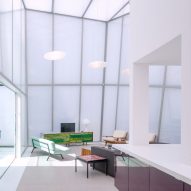 The Green Pavilion’s pyramidal roof was altered from the earlier design to incorporate openings that were required to ventilate the interior.

A system of hydraulic plungers allowed the glass panels to open automatically in response to rising temperatures inside the greenhouse. 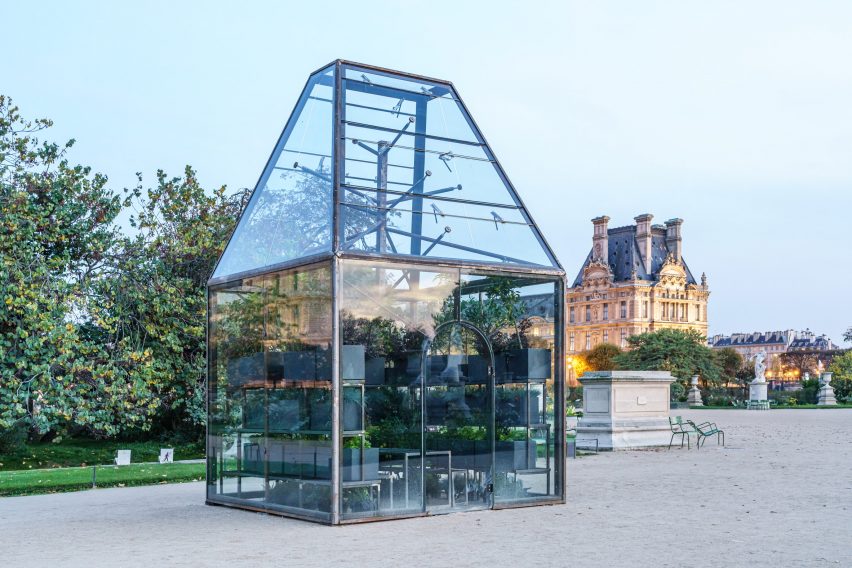 Visitors could enter the pavilion through an arched opening that echoes the design of the historical pavilion in Rouen.

It featured a minimal, frameless doorway articulated with hinges fitted directly onto the glass wall and door panel. The arched form minimised the potential for damage to any fragile corners. 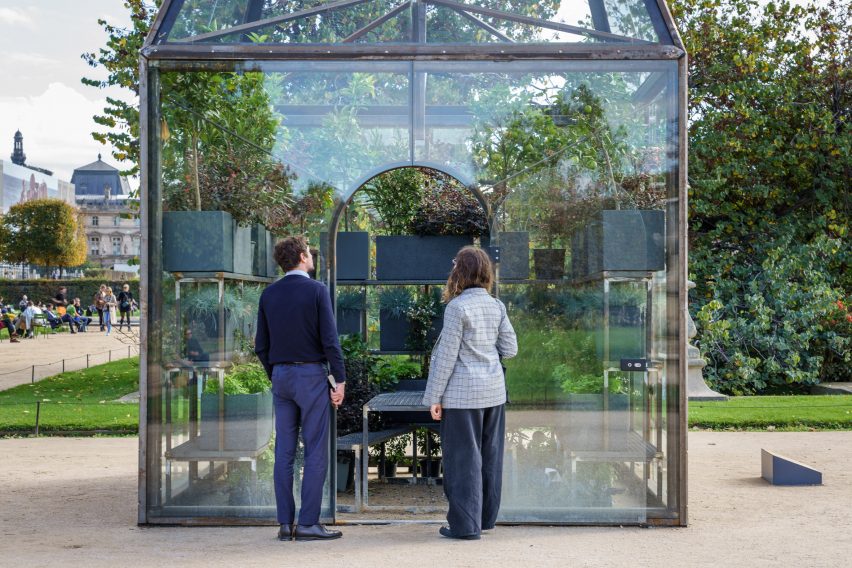 Architect Odile Decq designed the pavilion to function as a greenhouse

The pavilion contained shelves covered with plants typically found in traditional orangeries. These large greenhouses were fashionable in Northern Europe from the 17th to the 19th centuries and were used to protect fruit trees during the winter.

Herbs such as rosemary and thyme were displayed in The Green Pavilion alongside laurel and citrus trees. The plants surrounded a simple metal table and bench seating used to host events during the fair. 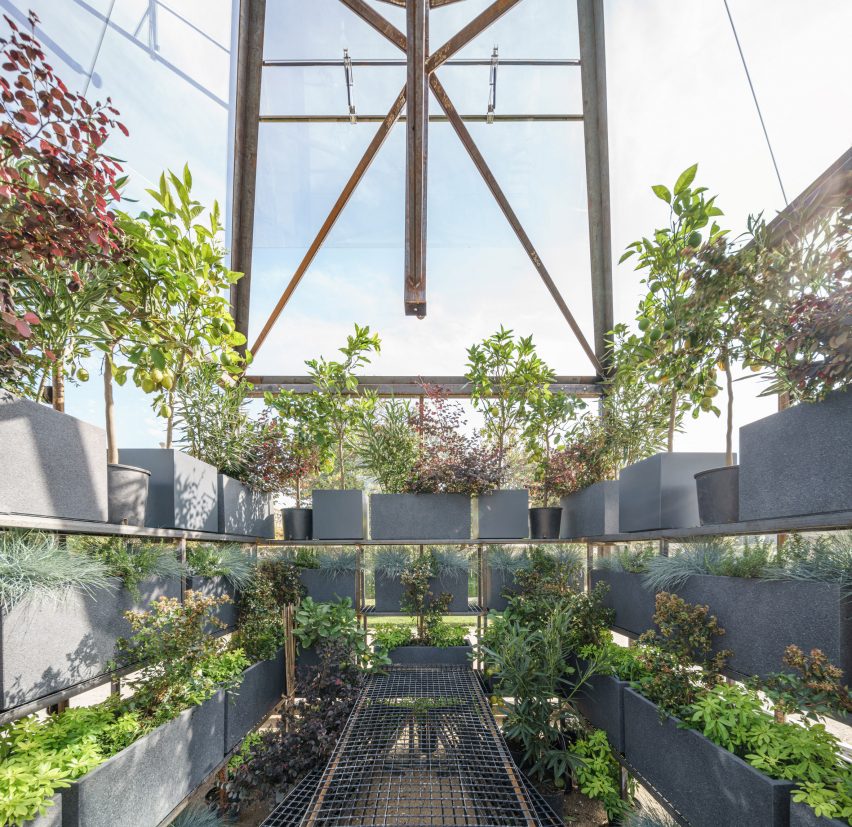 It was on show during the Paris + par Art Basel fair

Decq founded her eponymous studio in the 1980s and gained a reputation for her radical approach to architecture. In 2016 she was awarded the Jane Drew Prize for promoting the role of women in architecture and was described as “a creative powerhouse, spirited breaker of rules and advocate of equality”.

Decq’s previous projects include the renovation of Antti Lovag’s iconic 1970s bubble house in the south of France and the design of a house with glass walls for a client with vision loss.

The photography is by Stefan Tuchila.

With Joyce Russell WHAT a wet and windy time November has been! It’s getting colder too and there is no doubt that winter is with us. Most trees have … END_OF_DOCUMENT_TOKEN_TO_BE_REPLACED

The other night at about 2 a.m., I was intently scanning gardening sites seeking a specific carex (sedge). I paused, thinking I had finally gone over … END_OF_DOCUMENT_TOKEN_TO_BE_REPLACED

LIVONIA — Kylie Buckley picked up where she left off to conclude her junior season, exploding offensively in Livonia’s 66-29 win over Le Roy over the … END_OF_DOCUMENT_TOKEN_TO_BE_REPLACED

The Strathpeffer Pavilion Community Trust have put tickets on sale for a rescheduled Toploader date at the venue for Saturday, April 22.Toploader … END_OF_DOCUMENT_TOKEN_TO_BE_REPLACED

Kids of all ages welcome to come for a visit with Santa, lots of activities, and lots of fun The Moose Jaw District Senior Citizens … END_OF_DOCUMENT_TOKEN_TO_BE_REPLACED