Milwaukee has declared Friday, September 16th as Santiago Calatrava Day, in celebration of the architect’s contribution to the city. Calatrava’s legacy in the city comes in the form of the Milwaukee Art Museum’s Quadracci Pavilion, known locally as “The Calatrava.”

The pavilion opened in 2001 following four years of construction. Designed in collaboration with local architect David Kahler Slater, the project was Calatrava’s first building in the United States. Three years after the pavilion’s completion, Calatrava would unveil his design for the World Trade Center Transportation Hub in Lower Manhattan.

“What I love about Milwaukee is the city adopted it, even though it seems very foreign to what’s being made here, as the image of the city,” said Mo Zell, an associate professor and chair of the UWM architecture department in a 2020 reflection on Calatrava’s Quadracci Pavilion. “That’s a great thing when it feels like we live in a slightly conservative environment, and the exotic is what everyone can adopt and get behind. It’s the thing that helps give the city an international identity.” 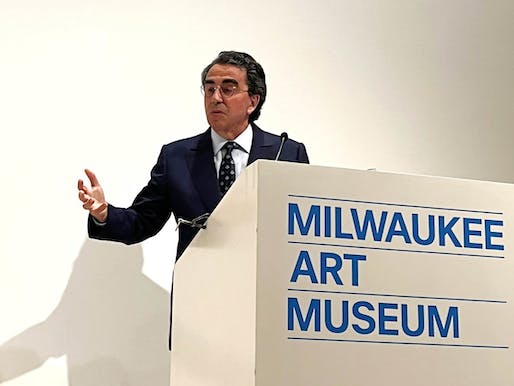 Calatrava returned to the pavilion to mark its 20th anniversary. Image: OnMilwaukee/Twitter

This week, Calatrava returned to the museum to mark its 20th anniversary. “Entering the museum it was for me like the opening,” Calatrava said. “It’s so well preserved, so beautifully preserved, and so much care has been taken; it means respect for the the work, respect to all the people who have been working here.” 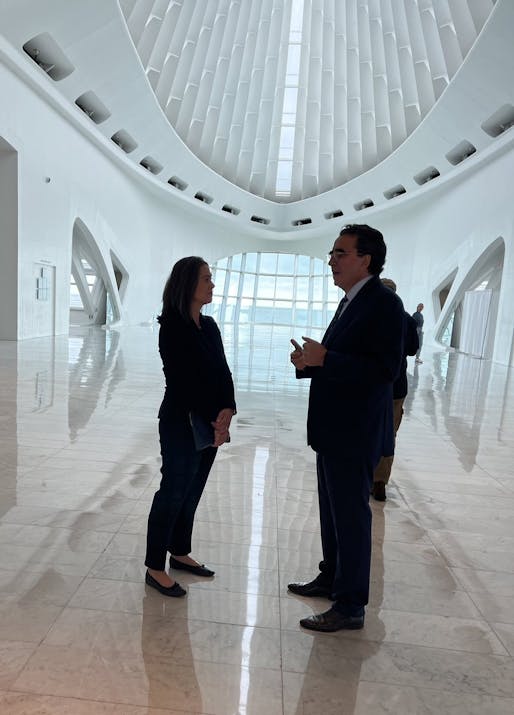 The event also saw Milwaukee’s Mayor Cavalier Johnson pay tribute to Calatrava’s contribution to the city. “You jump-started Milwaukee’s renaissance,” added Johnson, addressing Calatrava. “It’s fitting that there are wings on this building because it gave lift to the city.”

To celebrate Santiago Calatrava Day, the Milwaukee Art Museum is offering free admission to encourage visitors to appreciate the pavilion’s architectural form, including its moveable, wing-like brise soleil, and its vaulted glass ceiling.

Similar articles on Archinect that may interest you…

Several community events will be happening this month at Roxhill Park and Dragonfly Pavilion Park. “This can be a great time of year to get out and … END_OF_DOCUMENT_TOKEN_TO_BE_REPLACED

Blue skies, sunny weather, and an amazing food scene draw tons of visitors to Southern California. Whether you live in California or are just … END_OF_DOCUMENT_TOKEN_TO_BE_REPLACED