Drive around the city’s neighborhoods and you’ll see a few lawns that look like gardens.

While some homeowners are motivated by a need to do their part to help the environment by adding plants for pollinators and a natural habitat for wildlife, others are reacting to drought and the loss of advantageous insects and other wildlife, according to experts. An Associated Press article from May elaborated on the trend.

“Some people are experimenting with more ‘eco-friendly’ lawns and seed mixes you can buy with native grasses that aren’t as thirsty or finicky. Others are mowing less and tolerating old foes like dandelions and clover. Still, others are trying to replace lawns, entirely or bit by bit, with garden beds including pollinator-friendly and edible plants,” the May 6 articles states.

In Fort Wayne, Julianne Harter has transformed her small front yard on Ferguson Avenue for all those reasons, although the Midwest is currently not suffering from drought.

Trained in master gardening and a therapist by trade, Harter said because of her upbringing and her interests, she wanted to be able to contribute to the environment.

“As we know, the pollinators, the hummingbirds, they all need a place and a space to be able to access from the plants, and it’s becoming an issue with them having less habitats to source from due to many issues.  A lot is redevelopment, pesticides, herbicides and also this culture of green lawns and no weeds.

“Weeds get a bad name, and so weeds are all throughout my yard because all the pollinators and the birds and the bees, they all need to source from those as well,” Harter added. 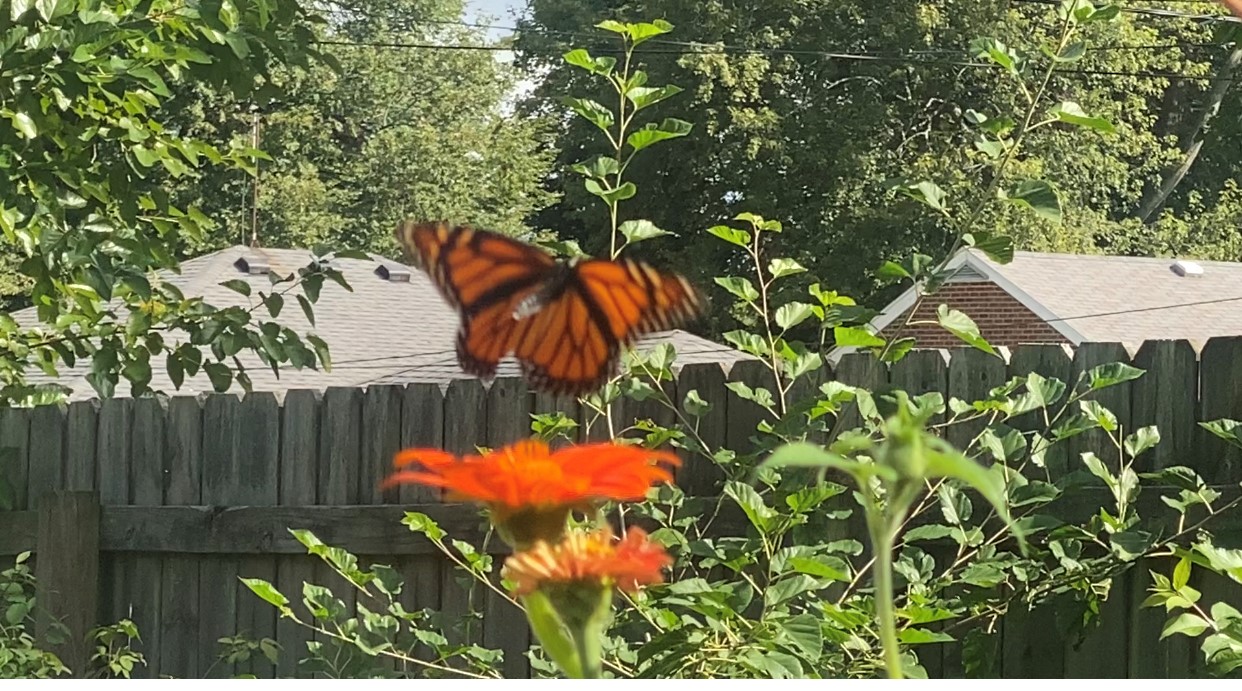 The front yard is full of zinnias, marigolds, horseradish, wild garlic, echinacea and sunflowers. Around the arch at the sidewalk, sweet autumn clematis and trump flower grow, sharing space with some pole beans to add to the effusion. There’s a cherry tree that produced pounds of fruit this year and two different kinds of pear trees. Around the back, she has planted plum, apple, peach and fig trees. Raspberry bushes help ward off Japanese beetles.

Many plants are “volunteers,” a word she got from her mother who taught her many things as she grew up on five acres full of plants, trees and bushes. Volunteers are the plants that just “show up,” like the mulberry bush she keeps trimmed at the sidewalk and the honeysuckle, which also needs to be pruned.

The seven-year project hasn’t been without a few bumps. Neighbors called in when she started in 2015, complaining of weeds. For three years, the letters came from the city until she was able to speak to someone and explain her goals. There was also talk at the city level of allowing homeowners to have their lush front lawns be part of “designated urban gardens.”

Neighborhood Code has no set policy on these gardens, but the policy is being revisited, according to Angelica Pickens, city spokeswoman. If the city receives a complaint about a property such as this, it sends a courtesy notice to the owner, usually prompting the owner to call the city. Currently the department “does not cite landscaping, flowerbeds nor gardens as a policy,” Pickens added.

If the property is to be made into a rain garden, the homeowner is required to register with City Utilities. If the property is registered, “we immediately close the weed case and remove it from the contractor’s list,” Pickens said.

Kemery says the grass lawn replacement movement started out West with Food Not Lawns. The organization has a chapter here.

“On the West Coast or New York City, you’re going to se a lot of front yards converted into food and plants,” Kemery said. Putting “incredible resources” into green lawns like conventional fertilizer and pesticides “is not truly sustainable for our future.”

On the other hand, a lawn needs to be planted with a purpose, instead of a “weedy sort of mess,” Kemery said.

Replacing a green lawn in the Pacific Northwest is easier than here. “In Indiana, it takes a little more effort because of our soils and climate,” Kemery said.

Describing Harter’s front yard as something like an English cottage garden, it’s still different because the plants that grow in England – hollyhocks, lupins and pinks – don’t do that well here.

Harter started small, covering the ground with a 10-foot by 20-foot piece of good cardboard and covering it with leaves and mulch. In the spring, she planted the area with plants and seeds and added a little bit more dirt to help the seeds. Pretty soon, the entire lawn on her plot, 40 feet wide and 200 feet deep, was covered in plants and trees.

Those who are interested in developing a permaculture that’s sustainable should google native plants for the Midwest and Indiana, specifically looking for those that have a deep root system that “help soak up the water.”

“I do a lot of research, and I enjoy gardening magazines,” Harter said. “It just kind of brought me to this point where I realized I wanted to have all the plants I could in my yard, and I didn’t want to have to mow it.”

Blue skies, sunny weather, and an amazing food scene draw tons of visitors to Southern California. Whether you live in California or are just … END_OF_DOCUMENT_TOKEN_TO_BE_REPLACED

Observant passers-by may have noticed that there has been a little bit of change to the gazebo, or outdoor shelter, outside the Keyano Centre. It is … END_OF_DOCUMENT_TOKEN_TO_BE_REPLACED