DeeDee and Chris Gibson have spent time on Kiawah Island, about 25 miles south of Charleston, for about four decades. “DeeDee and I built a house here, and one request she had was that we had a hospital close by for emergency needs,” he said.

But there wasn’t one. Now, thanks to the generosity of the Gibsons and other donors, that’s about to change. The mayors of Kiawah and Seabrook islands joined leaders from MUSC on Sept. 8 to break ground for the MUSC Health Sea Islands Medical Pavilion.

DeeDee Gibson, who with her husband contributed $2 million to the project, was on hand to see it. “I’m just glad to be a part of it. We just needed it so badly.”

DeeDee and Chris Gibson, front row, listen at the groundbreaking ceremony for a medical pavilion they are helping to fund.

The pavilion, on Seabrook Island Road near the Bohicket Marina, will serve Kiawah, Johns and Seabrook islands and the surrounding area. Pat Cawley, M.D., CEO of the MUSC Health system, said the goal is to bring health care to the people who need it. “We would establish this by providing a 24/7 emergency room, more primary care, more specialty care and all of this would be backed up by a world-class academic health system.”

Here’s a little more detail about the features Cawley mentioned. The free-standing Emergency Department will have a helipad for people who need to be flown to MUSC Health’s downtown Charleston hospital, four exam rooms, two trauma rooms and fast-track triage, along with X-ray, CT scan and lab services.

Other services in the medical pavilion will include:

David Cole, M.D., president of the Medical University of South Carolina, said the pavilion symbolizes the future health of the community and thanked everyone who helped make it possible.

But the journey to this point hasn’t always been easy. Charles Schulze, chairman of the MUSC Board of Trustees, noted the time and effort that have gone into it.

“As an Air Force veteran of the Vietnam war, I know the importance and necessity of teamwork. When you have a complex mission ahead of you, in those situations, your unity as a team is your biggest strength. And it didn’t matter where you live, where you were from or what your background was in our military. You learned that persistence, perseverance, collaboration and expertise are critical to the success of a mission,” he said.

“And it’s been no different in this case. When the board began to discuss the feasibility of this project, we knew it wasn’t going to happen without teamwork and vision. Not only from everybody at MUSC, but also from the community here in the Sea Islands.” 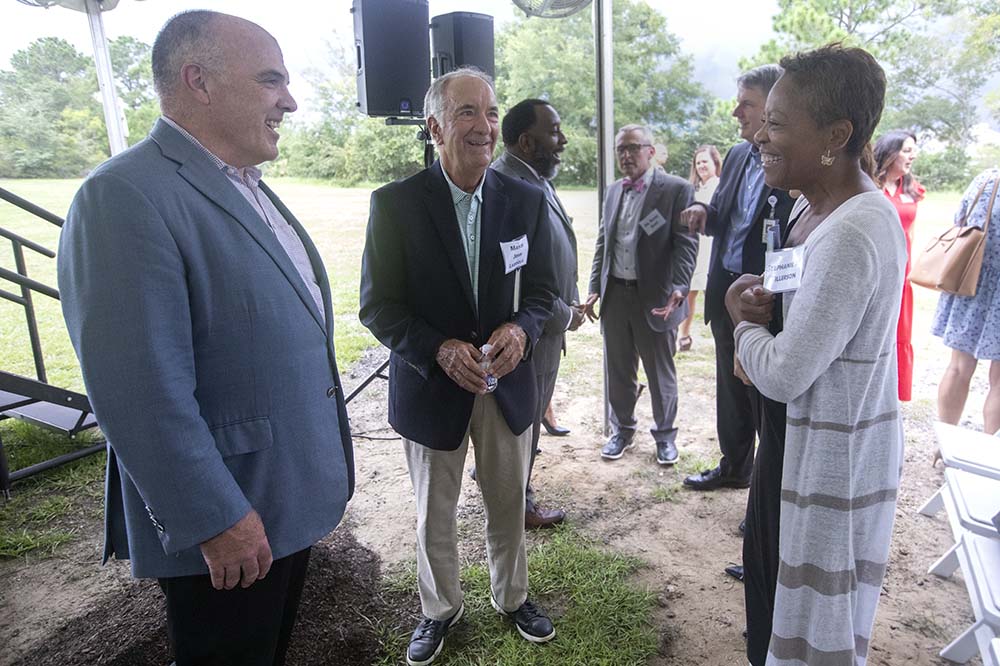 Leaders of those islands were happy to help realize that vision. They thanked MUSC Health for bringing badly needed care to the area.

“We look forward to having better availability of care, ranging from emergency room treatment to advanced diagnostics for the ailments, bumps, pains, scrapes, stings and strains that come with having an active and diverse population,” said Mayor John Gregg of Seabrook Island.

Kiawah Mayor John Labriola said he also looked forward to seeing the healing, restful green space and garden adjacent to the new facility that his town donated $1 million for.

MUSC is still raising money to build the medical pavilion. Of the estimated $30 million needed,  MUSC is committed to raising $17 million in private support. So far, it has more than $9.5 million in confirmed gifts, with many coming from local residents such as the Gibsons. They said it’s rewarding to be able to help.

“We’re really excited to be a part and contribute to MUSC and really look forward to having the medical needs for everybody on Kiawah, Seabrook and Johns islands,” Chris Gibson said.

This week, the morning lows were under 60 degrees in the Greater Houston area. Houstonians took their dogs out for walks, drank margaritas on the … END_OF_DOCUMENT_TOKEN_TO_BE_REPLACED

FANS expecting to see Jason Donovan at the Cliffs Pavilion have been disappointed the last two nights. Jason, alongside Alexandra Burke, start in … END_OF_DOCUMENT_TOKEN_TO_BE_REPLACED

You might know me as the plant lady who for years has attended the Village meetings requesting better services, with scant results.I have been told by … END_OF_DOCUMENT_TOKEN_TO_BE_REPLACED

There is a real upside to two new sweet potatoes making their debut in 2023. I mean that tongue and cheek as that is actually part of their name, but … END_OF_DOCUMENT_TOKEN_TO_BE_REPLACED