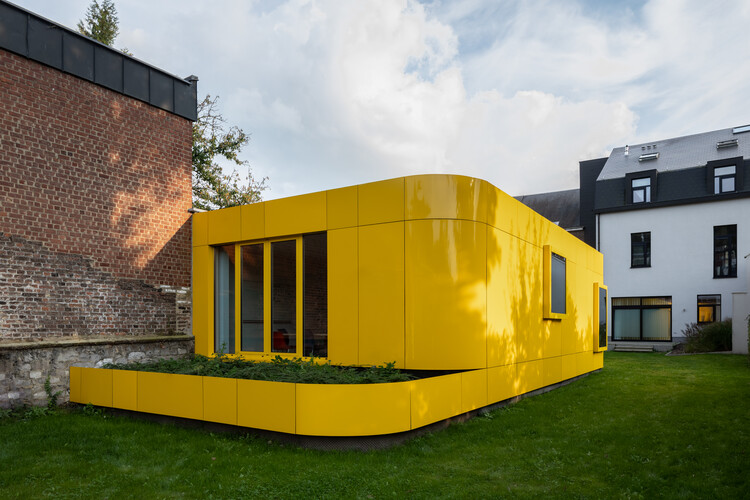 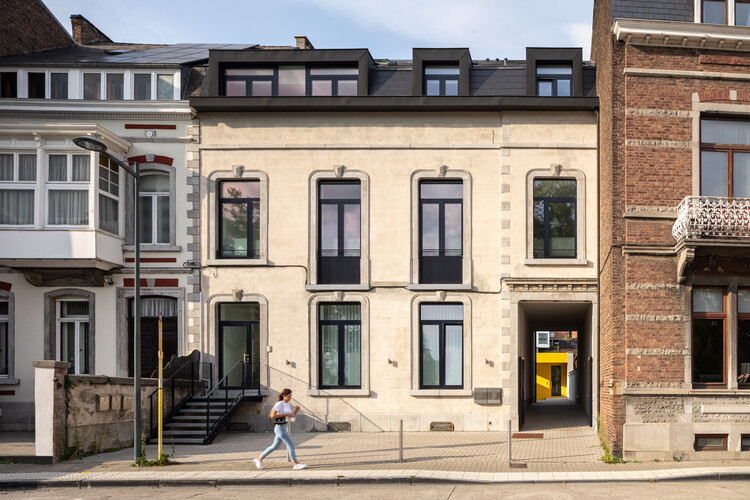 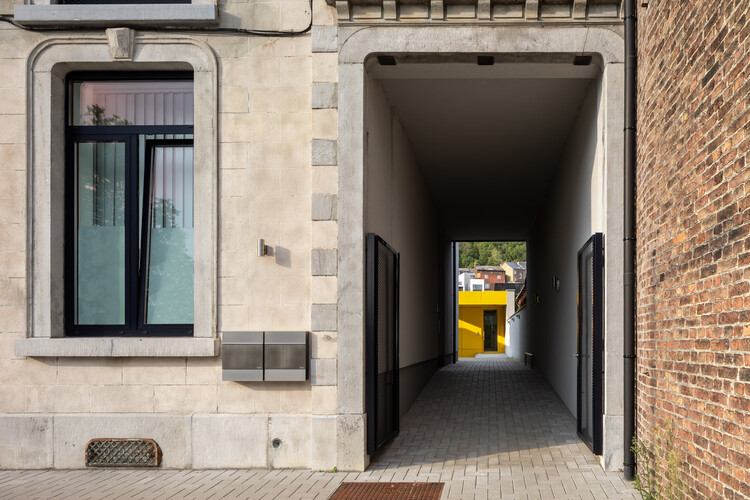 Text description provided by the architects. Realized by URBAN architects in the center of Namur (Belgium), the “Yellow Submarine” pavilion completes a larger rehabilitation program of a former mansion into a complex of offices and housing. The pavilion works independently: it includes an independent access system, several offices, a waiting room, a multifunctional space, and an independent toilet block. “Yellow Submarine” offers its users an atypical workplace within a bucolic space, in total disconnection from the urban environment that adjoins it. 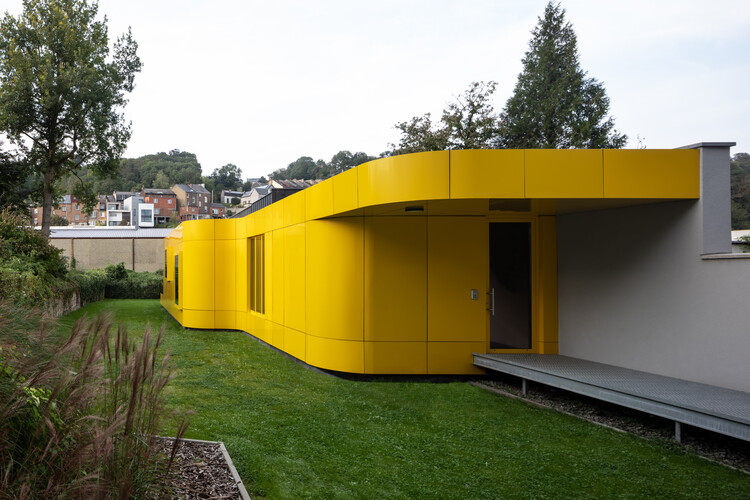 Located in the heart of a residential block, 25m from the main street and visible only from an old carriageway, the project arouses curiosity by its singularity and creates a furtive visual appeal for passers-by. Like a contemporary sculpture set in its natural setting, this non-conformist pavilion expresses its eccentricity through its curves and intense color. 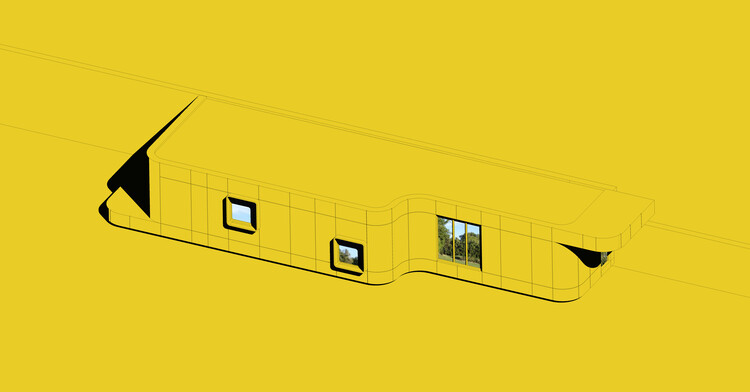 The “Yellow” is essentially defined through the deep contrast and abstraction it generates in its relationship with its context. The dissonance sought in this proposal, which expresses itself almost without compromise, offers the site and its users a unique experience accentuated by the frontal relationship between the pavilion’s yellow metal cladding and the plantings that face it. 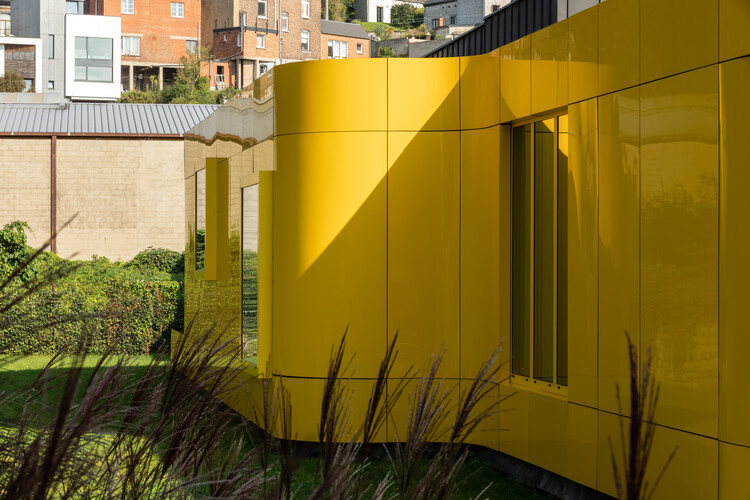 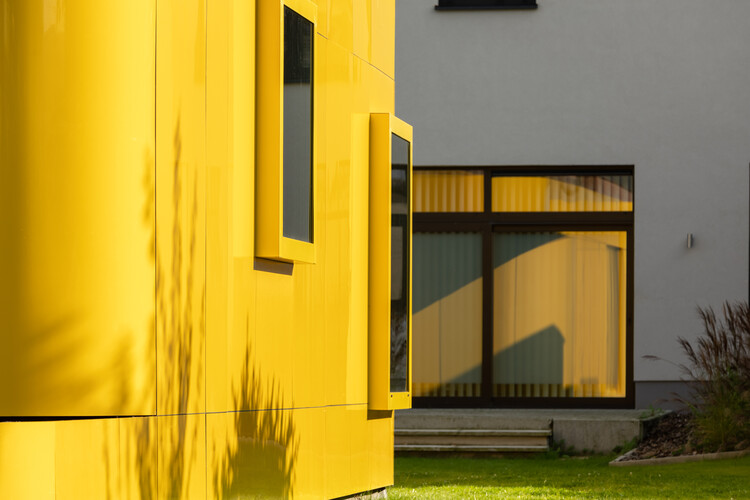 The garden space can be read as the negative of the pavilion plan. It offers the garden space more intimate proportions and its curvilinear contraction allows it to animate and privatize the rear area reserved for the users of the project. The project’s construction system contrast with its atypical appearance: It is based on traditional concrete block masonry insulated from the outside. The facade cladding, made of lacquered aluminum sheets with a mineral core, was pre-cut and pre-bent in the workshop and then fixed directly on site. 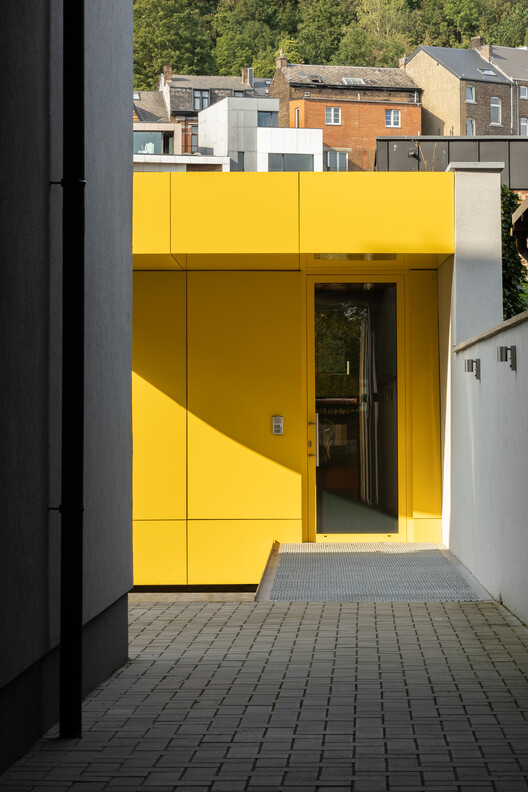 Explore the glory of gardening, and how it can help sow the seeds of wellness It was May 2022. My first batch of parsnip seeds failed to germinate … END_OF_DOCUMENT_TOKEN_TO_BE_REPLACED

CIVIC chiefs have been quizzed over their plans to splash an 'enormous' budget on the new pavilion at King George V playing fields. … END_OF_DOCUMENT_TOKEN_TO_BE_REPLACED

Gardeners like a challenge and the sense of accomplishment when trying something new. Forcing poinsettias and Christmas cactus to rebloom provides … END_OF_DOCUMENT_TOKEN_TO_BE_REPLACED

We leave Denmark with the leaves falling. The rowan is reddening, berries and branches. The cherry trees turning like in a watercolour painting. … END_OF_DOCUMENT_TOKEN_TO_BE_REPLACED